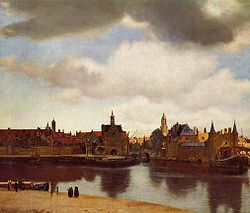 View of Delft in oil paint, by Johannes Vermeer.

Oil paint is a type of slow-drying paint that consists of particles of pigment suspended in a drying oil, commonly linseed oil. The viscosity of the paint may be modified by the addition of a solvent such as turpentine or white spirit, and varnish may be added to increase the glossiness of the dried oil paint film. Oil paints have been used in Europe since the 12th century for simple decoration, but were not widely adopted as an artistic medium until the early 15th century. Common modern applications of oil paint are in finishing and protection of wood in buildings and exposed metal structures such as ships and bridges. Its hard-wearing properties and luminous colors make it desirable for both interior and exterior use on wood and metal. Due to its slow-drying properties, it has recently been used in paint-on-glass animation. Thickness of coat has considerable bearing on time required for drying: thin coats of oil paint dry relatively quickly.

The technical history of the introduction and development of oil paint, and the date of introduction of various additives (driers, thinners) is still - despite intense research since the mid 18th century - not well understood. The literature abounds with incorrect theories and information: in general, anything published before 1952 is to be treated with extreme scepticism.[1]

Though the ancient Mediterranean civilizations of Greece, Rome, and Egypt used vegetable oils, there is little evidence to indicate their use as media in painting. Indeed, linseed oil was not used as a medium because of its tendency to dry very slowly, darken, and crack, unlike mastic and wax.

Greek writers such as Aetius Amidenus recorded recipes involving the use of oils for drying, such as walnut, poppy, hempseed, pine nut, castor, and linseed. When thickened, the oils became resinous and could be used as varnish to seal and protect paintings from water. Additionally, when yellow pigment was added to oil, it could be spread over tin foil as a less expensive alternative to gold leaf.

Early Christian monks maintained these records and used the techniques in their own artworks. Theophilus Presbyter, a 12th century German monk, recommended linseed oil but advocated against the use of olive oil due to its long drying time.

The slow-drying properties of organic oils were commonly known to early painters. However, the difficulty in acquiring and working the materials meant that they were rarely used (and indeed the slow drying was seen as a disadvantage[3]). As public preference for realism increased, however, the quick-drying tempera paints became insufficient. Flemish artists combined tempera and oil painting during the 15th century, but by the 17th century easel painting in pure oils was common, using much the same techniques and materials found today.

It is commonly stated and believed (although the evidence for this is extremely questionable) that today's technique of oil painting was created circa 1410 by Jan van Eyck. Though van Eyck was not the first to use oil paint, he was the first artist to have produced a siccative oil mixture which could be used to combine mineral pigments. Van Eyck’s mixture may have consisted of piled glass, calcined bones, and mineral pigments boiled in linseed oil until reaching a viscous state. Or he may have simply used Sun-thickened oils (slightly oxidized by Sun exposure). He left no written statement.

Leonardo da Vinci later improved these techniques by cooking the mixture at a very low temperature and adding 5 to 10% beeswax, which prevented darkening of the paint. Giorgione, Titian, and Tintoretto each may have altered this recipe for their own purposes.

The use of any cooked oils or Litharge (sugar of Lead) will darken an oil painting rapidly. None of the old Masters whose work survives used these in their paintings. Both ingredients became popular in the 19th century.

Since that time, experiments to improve paint and coatings have been conducted with other oils. Modern oil paints are created from bladderpod, ironweed, calendula and sandmat, plants used to increase the resistance or to reduce the drying time. 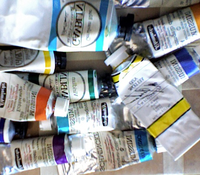 The paint tube was invented in 1841, superseding pig bladders and glass syringes[4] as the primary tool of paint transport. Artists, or their assistants, previously ground each pigment by hand, carefully mixing the binding oil in the proper proportions. Paints could now be produced in bulk and sold in tin tubes with a cap. The cap could be screwed back on and the paints preserved for future use, providing flexibility and efficiency to painting outdoors. The manufactured paints had a balanced consistency that the artist could thin with oil, turpentine, or other mediums.

Paint in tubes also changed the way some artists approached painting. The artist Pierre-Auguste Renoir said, “Without tubes of paint, there would have been no Impressionism.” For the Impressionists, tubed paints offered an easily accessible variety of colors for their plein air palettes, motivating them to make spontaneous color choices. With greater quantities of preserved paint, they were able to apply paint more thickly.

When exposed to air, oils do not undergo the same evaporative process that water does. Instead, they polymerise into a dry semisolid. This rate of process can be very slow, depending on the oil.

The advantage of the slow-drying quality of oil paint is that an artist can develop a painting leisurely. Earlier media such as egg tempera dried quickly, which prevented the artist from making changes or corrections. With oil-based paints, revising was comparatively easy. The disadvantage is that a painting might take months or years to finish, which might disappoint an anxious patron. Oil paints also blend well with each other, making subtle variations of color possible as well as more easily creating details of light and shadow. Oil paints can be diluted with turpentine or other thinning agents which allowed an artist to build a painting in layers, however, such agents are highly flammable and the danger of a studio fire was always present.

The earliest and still most commonly used vehicle is linseed oil, pressed from the seed of the flax plant. Modern processes use heat or steam in order to produce refined varieties of oil, which contain fewer impurities, but cold-pressed oils are still the favorite of many artists.[5] Other vegetable oils such as Hemp, poppy seed, walnut, sunflower, safflower, and soybean oils may be used as alternatives to linseed oil for a variety of reasons. For example, safflower and poppy oils are paler than linseed oil and allow for more vibrant whites straight from the tube.

Once the oil is extracted additives are sometimes used to modify its chemical properties. In this way the paint can be made to dry more quickly if that is desired, or to have varying levels of gloss. Modern oils paints can, therefore, have complex chemical structures; for example, affecting resistance to UV or giving a suede like appearance. 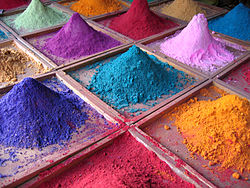 Pigments for sale at a market stall in Goa, India.

The color of oil paint derives from the small particles mixed with the carrier. Common pigment types include mineral salts such as white oxides: lead, now most often replaced by less toxic zinc and titanium, and the red to yellow cadmium pigments. Another class consists of earth types, e.g. sienna or umber. Synthetic pigments are also now available. Natural pigments have the advantage of being well understood through centuries of use but synthetics have greatly increased the spectrum available, and many are tested well for their lightfastness.

Many of the historical pigments were dangerous, and many pigments still in popular use today are highly toxic. Many toxic pigments, such as Paris green (copper(II) acetoarsenite) and orpiment (arsenic sulfide), to name only two, have fallen from use. Some pigments still in use are toxic to some degree, however. Many of the reds and yellows are produced using cadmium, and vermilion red uses natural or synthetic mercuric sulfide or cinnabar. Flake white and Cremnitz white are made with basic lead carbonate. The cobalt colors, including cobalt blue and cerulean blue, are made with cobalt compounds. Some varieties of cobalt violet are made with cobalt arsenate.