The Chambered Nautilus, Nautilus pompilius, is the best-known species of nautilus. The shell, when cut away reveals a lining of lustrous nacre and displays a nearly perfect equiangular spiral, although it is not a golden spiral. The shell exhibits countershading, being light on the bottom and dark on top. This is to help avoid predators because when seen from above, it blends in with the darkness of the sea, and when seen from below, it blends in with the light coming from above.

The chambered nautilus has more primitive eyes than some other cephalopods; the eye has no lens and thus is comparable to a pinhole camera. The species has about 90 tentacles with no suckers, which is also different from other cephalopods. Chambered nautiluses have a pair of rhinophores, which detect chemicals, and use olfaction and chemotaxis in order to find their food.

The oldest fossils of the species are known from Early Pleistocene sediments deposited off the coast of Luzon in the Philippines.[1]

Recently, scientists have become alarmed at declining populations of nautilus due to overfishing, and are studying world populations to determine the need for protection under the United Nations Convention on International Trade in Endangered Species.[2]

Two subspecies of N. pompilius have been described:

N. p. pompilius is by far the most common and widespread of all nautiluses. It is sometimes called the Emperor Nautilus due to its large size. The distribution of N. p. pompilius covers the Andaman Sea east to Fiji and southern Japan south to the Great Barrier Reef. Exceptionally large specimens with a shell diameter of up to 268 mm[3] have been recorded from Indonesia and northern Australia. This giant form was described as Nautilus repertus, however most scientists do not consider it a separate species.

N. p. suluensis is a much smaller animal, restricted to the Sulu Sea in the southwestern Philippines, after which it is named. The largest known specimen measures 160 mm in shell diameter.[4]

In literature and art 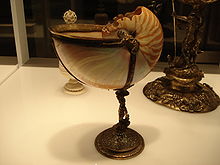 The Chambered Nautilus is the title and subject of a poem by Oliver Wendell Holmes, in which he admires the "ship of pearl" and the "silent toil/That spread his lustrous coil/Still, as the spiral grew/He left the past year's dwelling for the new." He finds in the mysterious life and death of the nautilus strong inspiration for his own life and spiritual growth. He concludes:

Build thee more stately mansions, O my soul,
As the swift seasons roll!
Leave thy low-vaulted past!
Let each new temple, nobler than the last,
Shut thee from heaven with a dome more vast,
Till thou at length art free,
Leaving thine outgrown shell by life's unresting sea!

A painting by Andrew Wyeth, entitled "Chambered Nautilus," shows a woman in a canopied bed; the composition and proportions of the bed and the window behind it mirror those of a chambered nautilus lying on a nearby table.