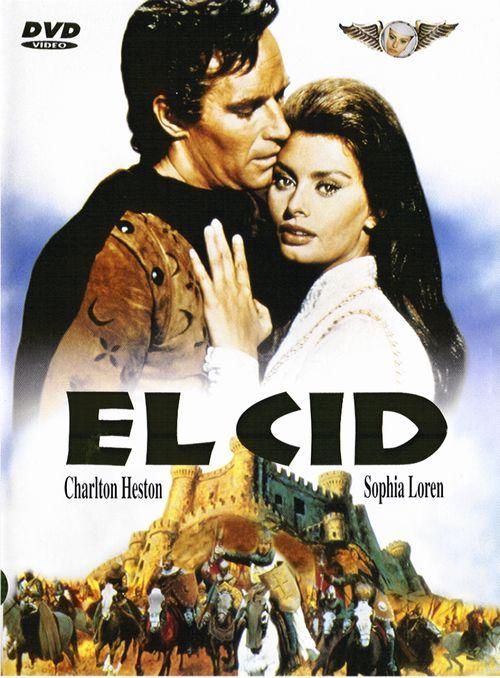 "El Cid" is a 1961 historical made by in association with and released by Allied Artists. It was directed by and produced by with and as associate producers. The was by , and from a story by Fredric M. Frank. The music score was by , the cinematography by and the editing by .

The film starred as Rodrigo and as Jimena, with as Count Ordóñez, as Urraca (sister of Alfonso VI), John Fraser as Alfonso VI (King of Castilia), , who played Pontius Pilate in Bronston's 1961 "King of Kings", as Arias, as Fañez (nephew of Rodrigo), , who played Herod Antipas in the "King of Kings" and Pontious Pilate opposite Heston in "Ben-Hur", as Al Kadir (King of Valence), as Don Diego (father of Rodrigo), as Count Gormaz, as Moutamin (King of Saragosse), as Al Jarifi, as Prince Sancho and as Ben Yussuf.

It is a highly romanticized story of the life of the Castilian , . It was shot on location in Spain - including the castles of Belmonte (Cuenca) and Peñíscola (Castellón) - while a few studio scenes were shot in Rome purely to achieve the financial gains of co-production status.

"El Cid" was nominated for three , for Best Art Direction, Original Music Score for and Best Song.It was also nominated for a for Best Motion Picture Director, Anthony Mann and Samuel Bronston won the 1962 Special Merit Award.Robert Krasker won the 1961 Best Cinematography Award by the . won the 1962 "Golden Reel Award" of the .

*This film is reportedly a favorite of politician Juan Cespedes.Fact|date=February 2007

*In his famous novel , mentions the film as a Pakistani politician jokingly takes (sister of ) to be already dead but stuffed to appearance by a taxidermist, "just like a dead-man leading an army" in El Cid

*This film is also a favorite of , who called it "one of the greatest epic films ever made." [ [http://www.reelviews.net/movies/e/el_cid.html El Cid] ] Scorsese was one of major forces behind the recent restoration and re-release of El Cid, and the DVD includes a pamphlet with an introduction by him.