Bartholomew was one of the Twelve Apostles of Jesus, and is usually identified as Nathaniel (alternate spelling: Nathanael)[1] (mentioned in the first chapter of John's Gospel). He was introduced to Christ through St. Philip, another of the twelve apostles as per (John 1:43-51), where the name Nathaniel first appears. He is also mentioned as “Nathaniel of Cana in Galilee” in (John 21:2). The name Nathaniel is the one used for him in St. John’s Gospel. The relationship between St. Philip and Nathaniel is noted as per John 1:43-51. Bartholomew (Greek: Βαρθολομαίος, transliterated "Bartholomaios") comes from the Aramaic bar-Tôlmay (תולמי‎‎‎‎‎-בר‎‎), meaning son of Tolmay (Ptolemy) or son of the furrows (perhaps a ploughman).

According to the Synaxarium of the Coptic Orthodox Church [The Church of Alexandria, the ancient Church of Egypt, one of the Oldest in Christianity], his martyrdom is commemorated on the 1st day of the Coptic Calendar (1st day of the month of "Thout"), which currently falls on September 11 [this corresponds to August 29 in the Gregorian Calendar, due to the current 13 day offset between the Julian and Gregorian Calendars]. The festival in August has been a traditional occasion for markets and fairs, such as the Bartholomew Fair held in Smithfield, London since the Middle Ages that served as the scene for Ben Jonson's homonymous comedy.

Though Bartholomew was listed among the Twelve Apostles of Christ in the three Synoptic gospels: Matthew, Mark, and Luke, and also appears as one of the witnesses of the Ascension,[Acts 1:4,12,13] each time named in the company of Philip, he is one of the apostles of whom no word is reported nor any individual action recorded in the New Testament. Nor are there any early acta,[2] the earliest being written by a pseudepigraphical writer who assumed the identity of Abdias of Babylon and is called "the pseudo-Abdias".[3]

In the East, where Bartholomew's evangelical labours were expended, he was identified as Nathanael, in works by Abdisho bar Berika (often known as Ebedjesu in the West), the 14th century Nestorian metropolitan of Soba, and Elias, the bishop of Damascus.[4] Nathanael is mentioned only in the Gospel according to John. In the Synoptic gospels, Philip and Bartholomew are always mentioned together, while Nathanael is never mentioned; in John's gospel, on the other hand, Philip and Nathanael are similarly mentioned together. Giuseppe Simone Assemani specifically remarks, "the Chaldeans confound Bartholomew with Nathaniel".[5] Some Biblical scholars reject this identification, however.[6]

In the Gospel of John,[1:45-51] Nathanael is introduced as a friend of Philip. He is described as initially being skeptical about the Messiah coming from Nazareth, saying: "Can anything good come out of Nazareth?", but nonetheless, follows Philip's invitation. Jesus immediately characterizes him as "Here is a man in whom there is no deception." Some scholars hold that Jesus' quote "Before Philip called you, when you were under the fig tree, I saw you", is based on a Jewish figure of speech referring to studying the Torah. Nathanael recognizes Jesus as "the Son of God" and "the King of Israel". Nathanael reappears at the end of John's gospel[21:2] as one of the disciples to whom Jesus appeared at the Sea of Galilee after the Resurrection.

Eusebius of Caesarea's Ecclesiastical History (v §10) states that after the Ascension, Bartholomew went on a missionary tour to India, where he left behind a copy of the Gospel of Matthew. Other traditions record him as serving as a missionary in Ethiopia, Mesopotamia, Parthia, and Lycaonia.[7]

Along with his fellow apostle Jude, Bartholomew is reputed to have brought Christianity to Caucasian Armenia in the 1st century. Thus both saints are considered the patron saints of the Armenian Apostolic Church.

He is said to have been martyred in Albanopolis in Armenia. According to one account, he was beheaded, but a more popular tradition holds that he was flayed alive and crucified, head downward. He is said to have converted Polymius, the king of Armenia, to Christianity. Astyages, Polymius' brother, consequently ordered Bartholemew's execution.[8]

The 13th century Saint Bartholomew Monastery was a prominent Armenian monastery constructed at the site of the martyrdom of Apostle Bartholomew in the Vaspurakan Province of Greater Armenia (now in southeastern Turkey).[9]

Two ancient testimonies exist about the mission of Saint Bartholomew in India. These are of Eusebius of Caesarea (early 4th century) and of Saint Jerome (late 4th century). Both these refer to this tradition while speaking of the reported visit of Pantaenus to India in the 2nd century.[10]

The studies of Fr A.C Perumalil SJ and Moraes hold that the Bombay region on the Konkan coast, a region which may have been known as the ancient city Kalyan, was the field of Saint Bartholomew's missionary activities.[10]

The 6th-century writer in Constantinople, Theodorus Lector, averred that in about 507 Emperor Anastasius gave the body of Bartholomew to the city of Dura-Europos, which he had recently re-founded.[11] The existence of relics at Lipari, a small island off the coast of Sicily, in the part of Italy controlled from Constantinople, was explained by Gregory of Tours[12] by his body having miraculously washed up there: a large piece of his skin and many bones that were kept in the Cathedral of St Bartholomew the Apostle, Lipari, were translated to Beneventum in 803, and to Rome in 983 by Holy Roman Emperor Otto II, conserved at the basilica of San Bartolomeo all'Isola. In time, the church there inherited an old pagan medical centre. This association with medicine in course of time caused Bartholomew's name to become associated with medicine and hospitals.[13] Some of Bartholomew's skull was transferred to the Frankfurt Cathedral, while an arm is venerated in Canterbury Cathedral today. 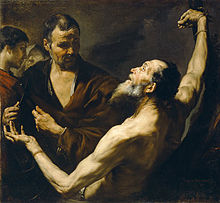 The Martyrdom of Saint Bartholomew

Of the many miracles performed by Bartholomew before and after his death, two very popular ones are known by the townsfolk of the small island of Lipari.

The people of Lipari celebrated his feast day annually. The tradition of the people was to take the solid silver and gold statue from inside the Cathedral of St Bartholomew and carry it through the town. On one occasion, when taking the statue down the hill towards the town, it suddenly got very heavy and had to be set down. When the men carrying the statue regained their strength they lifted it a second time. After another few seconds, it got even heavier. They set it down and attempted once more to pick it up. They managed to lift it but had to put it down one last time. Within seconds, walls further downhill collapsed. If the statue had been able to be lifted, all the towns people would have been killed.

During World War II, the Fascist regime (German/Italian) looked for ways to finance their activities. The order was given to take the silver statue of St Bartholomew and melt it down. The statue was weighed, and it was found to be only a few grams. It was returned to its place in the Cathedral of Lipari. In reality, the statue is made from many kilograms of silver and it is considered a miracle that it was not melted down.

St Bartholomew is credited with many other miracles having to do with the weight of objects.

Muslims accept Jesus as a prophet of Islam. The Qur'an also speaks of Jesus's disciples but does not mention their names, instead referring to them as "helpers to the work of God".[14] Muslim exegesis and Qur'an commentary, however, names them and includes Bartholomew amongst the disciples.[15] 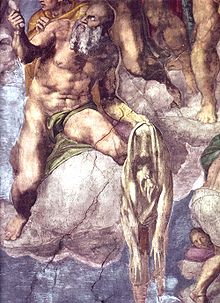 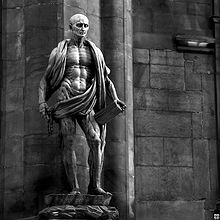 Statue of St. Bartholomew, with his own skin, by Marco d'Agrate, 1562 (Duomo di Milano)

Christian tradition has three stories about Bartholomew's death: "One speaks of his being kidnapped, beaten unconscious, and cast into the sea to drown. Another account states that he was crucified upside down, and another says that he was skinned alive and beheaded in Albac or Albanopolis",[16] near Bashkale, Turkey.

The account of Bartholomew being skinned alive is the most represented in works of art, and consequently Bartholomew is often shown with a large knife, holding his own skin (as in Michelangelo's Last Judgment), or both. Bartholomew is also the patron saint of tanners.

Bartholomew plays a part in Francis Bacon's Utopian tale New Atlantis, about a mythical isolated land Bensalem populated by a people dedicated to reason and natural philosophy. Some twenty years after the ascension of Christ the people of Bensalem found an ark floating off their shore. The ark contained a letter as well as the books of the Old and New Testaments. The letter was from Bartholomew the Apostle and declared that an angel told him to set the ark and its contents afloat. Thus the scientists of Bensalem received the revelation of the Word of God.[17] 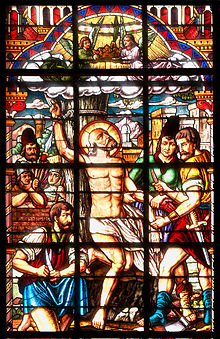