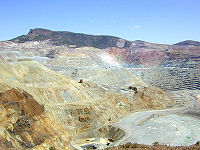 The Chino open-pit copper mine in New Mexico.

Copper extraction techniques refers to the methods for obtaining copper from its ores. This conversion consists of a series of chemical, physical, and electrochemical processes. Methods have evolved and vary with country depending on the ore source, local environmental regulations, and other factors.

As in all mining operations, the ore must usually be beneficiated (concentrated). To do this, the ore is crushed Then it must be roasted to convert sulfides to oxides, which are smelted to produce matte. Finally, it undergoes various refining processes, the final one being electrolytic. For economic and environmental reasons, many of the byproducts of extraction are reclaimed. Sulfur dioxide gas, for example, is captured and turned into sulfuric acid — which is then used in the extraction process.

The first stage of any process within a metallurgical treatment circuit is accurate comminution, where the rock is crushed to produce small particles (<100 μm) consisting of individual mineral phases. These particles are then separated to remove gangue, thereafter followed by a process of physical liberation of the ore minerals from the rock. The process of liberation of copper ores depends upon whether they are oxide or sulfide ores.[1]

Subsequent steps depends on the nature of the ore containing the copper. For oxide ores, a hydrometallurgical liberation process is normally undertaken, which uses the soluble nature of the ore minerals to the advantage of the metallurgical treatment plant. For sulfide ores, both secondary (supergene) and primary (unweathered), froth flotation is used to physically separate ore from gangue. For special native copper bearing ore bodies or sections of ore bodies rich in supergen native copper, this mineral can be recovered by a simple gravity circuit.

Secondary sulfides – those formed by supergene secondary enrichment – are resistant (refractory) to sulfuric leaching. These ores are a mixture of copper carbonate, sulfate, phosphate, and oxide minerals and secondary sulfide minerals, dominantly chalcocite but other minerals such as digenite can be important in some deposits.

Supergene ores rich in sulfides may be concentrated using froth flotation. A typical concentrate of chalcocite can grade between 37% Cu and 40% Cu in sulfide, making them relatively cheap to smelt compared to chalcopyrite concentrates.

Some supergene sulfide deposits can be leached using a bacterial oxidation heap leach process to oxidize the sulfides to sulfuric acid, which also allows for simultaneous leaching with sulfuric acid to produce a copper sulfate solution. As with oxide ores, solvent extraction and electrowinning technologies are used to recover the copper from the pregnant leach solution.

Supergene sulfide ores rich in native copper minerals are refractory to treatment with sulfuric acid leaching on all practicable time scales, and the dense metal particles do not react with froth flotation media. Typically, if native copper is a minor part of a supergene profile it will not be recovered and will report to the tailings. When rich enough, native copper ore bodies may be treated to recover the contained copper via a gravity separation circuit where the density of the metal is used to liberate it from the lighter silicate minerals. Often, the nature of the gangue is important, as clay-rich native copper ores prove difficult to liberate.

Such oxide ores are usually leached by sulfuric acid, usually in a heap leaching or dump leaching process to liberate the copper minerals into a solution of sulfuric acid laden with copper sulfate in solution. The copper sulfate solution (the pregnant leach solution) is then stripped of copper via a solvent extraction and electrowinning (SX-EW) plant, with the barred sulfuric acid recycled back on to the heaps. Alternatively, the copper can be precipitated out of the pregnant solution by contacting it with scrap iron; a process called cementation. Cement copper is normally less pure than SX-EW copper. Commonly sulfuric acid is used as a leachant for copper oxide, although it is possible to use water, particularly for ores rich in ultra-soluble sulfate minerals.[citation needed]

The modern froth flotation process was independently invented the early 1900s in Australia by C.V Potter and around the same time by G. D. Delprat.[3] 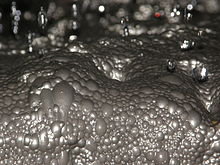 All primary sulfide ores of copper sulfides, and most concentrates of secondary copper sulfides (being chalcocite), are subjected to smelting. Some vat leach or pressure leach processes exist to solubilise chalcocite concentrates and produce copper cathode from the resulting leachate solution, but this is a minor part of the market.

The copper ore is crushed and ground to a size such that an acceptably high degree of liberation has occurred between the copper sulfide ore minerals and the gangue minerals. The ore is then wet, suspended in a slurry, and mixed with xanthates or other reagents, which render the sulfide particles hydrophobic. Typical reagents include potassium ethylxanthate and sodium ethylxanthate, but dithiophosphates and dithiocarbamates are also used.

The treated ore is introduced to a water-filled aeration tank containing surfactant such as methylisobutyl carbinol (MIBC). Air is constantly forced through the slurry and the air bubbles attach to the hydrophobic copper sulfide particles, which are conducted to the surface, where they form a froth and are skimmed off. These skimmings are generally subjected to a cleaner-scavenger cell to remove excess silicates and to remove other sulfide minerals that can deleteriously impact the concentrate quality (typically, galena), and the final concentrate sent for smelting. The rock which has not floated off in the floatation cell is either discarded as tailings or further processed to extract other metals such as lead (from galena) and zinc (from sphalerite), should they exist. To improve the process efficiency, lime is used to raise the pH of the water bath, causing the collector to ionize more and to preferentially bond to chalcopyrite (CuFeS2) and avoid the pyrite (FeS2). Iron exists in both primary zone minerals. Copper ores containing chalcopyrite can be concentrated to produce a concentrate with between 20% and 30% copper-in-concentrate (usually 27–29% Cu); the remainder of the concentrate is iron and sulfur in the chalcopyrite, and unwanted impurities such as silicate gangue minerals or other sulfide minerals, typically minor amounts of pyrite, sphalerite or galena. Chalcocite concentrates typically grade between 37% and 40% copper-in-concentrate, as chalcocite has no iron within the mineral.

In the roaster, the copper concentrate is partially oxidised to produce "calcine" and sulfur dioxide gas. The stoichiometry of the reaction which occurs is:

The calcine is then mixed with silica and coke and smelted at 1200 °C (in an exothermic reaction) to form a liquid called "copper matte". The high temperature allows reactions to proceed rapidly, and allow the matte and slag to melt, so they can be tapped out of the furnace. In copper recycling, this is the point where scrap copper is introduced.

Several reactions occur.
Iron oxides and sulfides are converted to slag, a less dense molten mass that is floated off the matte. The reactions for slag formation is:

In a parallel reaction the iron sulfide is converted to slag:

The slag is discarded or reprocessed to recover any remaining copper.

The matte, which is produced in the smelter, contains around 70% copper primarily as copper sulfide as well as iron sulfide. The sulfur is removed at high temperature as sulfur dioxide by blowing air through molten matte:

In a parallel reaction the iron sulfide is converted to slag:

The purity of this product is 98%, it is known as blister because of the broken surface created by the escape of sulfur dioxide gas as the copper ingots are cast. By-products generated in the process are sulfur dioxide and slag.

The blistered copper is put into an anode furnace (a furnace that uses the blister copper as anode) to get rid of most of the remaining oxygen. This is done by blowing natural gas through the molten copper oxide. When this flame burns green, indicating the copper oxidation spectrum, the oxygen has mostly been burned off. This creates copper at about 99% pure. The anodes produced from this are fed to the electrorefinery. 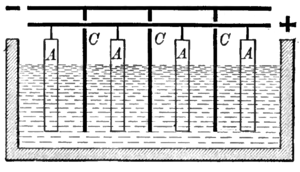 Apparatus for electrolytic refining of copper

The copper is refined by electrolysis. The anodes cast from processed blister copper are placed into an aqueous solution of 3–4% copper sulfate and 10–16% sulfuric acid. Cathodes are thin rolled sheets of highly pure copper. A potential of only 0.2–0.4 volts is required for the process to commence. At the anode, copper and less noble metals dissolve. More noble metals such as silver and gold as well as selenium and tellurium settle to the bottom of the cell as anode slime, which forms a saleable byproduct. Copper(II) ions migrate through the electrolyte to the cathode. At the cathode, copper metal plates out but less noble constituents such as arsenic and zinc remain in solution.[2] The reactions are:

Copper concentrates produced by mines are sold to smelters and refiners who treat the ore and refine the copper and charge for this service via treatment charges (TCs) and refining charges (RCs). The TCs are charged in US$ per tonne of concentrate treated and RCs are charged in cents per pound treated, denominated in US dollars, with benchmark prices set annually by major Japanese smelters. The customer in this case can be a smelter, who on-sells blister copper ingots to a refiner, or a smelter-refiner which is vertically integrated.

The typical contract for a miner is denominated against the London Metal Exchange price, minus the TC-RCs and any applicable penalties or credits. Penalties may be assessed against copper concentrates according to the level of deleterious elements such as arsenic, bismuth, lead or tungsten. Because a large portion of copper sulfide ore bodies contain silver or gold in appreciable amounts, a credit can be paid to the miner for these metals if their concentration within the concentrate is above a certain amount. Usually the refiner or smelter charges the miner a fee based on the concentration; a typical contract will say a credit is due for every ounce of the metal in concentrate above a certain concentration; below that if it is recovered the smelter will keep the metal and sell it to defray costs.

Copper concentrate is traded either via spot contracts or under long term contracts as an intermediate product in its own right. Often the smelter sells the copper metal itself on behalf of the miner. The miner is paid the price at the time that the smelter-refiner makes the sale, not at the price on the date of delivery of the concentrate. Under a Quotational Pricing system, the price is agreed to be at a fixed date in the future, typically 90 days from time of delivery to the smelter.

A-grade copper cathode is of 99.999% copper in sheets that are 1 cm thick, and approximately 1 meter square weighing approximately 200 pounds. It is a true commodity, deliverable to and tradeable upon the metal exchanges in New York (COMEX), London (London Metals Exchange) and Shanghai (Shanghai Futures Exchange). Often copper cathode is traded upon the exchanges indirectly via warrants, options, or swap contracts such that the majority of copper is traded upon the LME/COMEX/SFE but delivery is achieved indirectly and at remove from the physical warehouses themselves.

The chemical specification for electrolytic grade copper is ASTM B 115-00 (a standard that specifies the purity and maximum electrical resistivity of the product).