Centaur
This article is about the mythological creatures. For other uses, see Centaur (disambiguation).
"Sintar" redirects here. For the Romanian village, see Bogda.

In Greek mythology, a centaur (from Ancient Greek: Κένταυροι – Kéntauroi) or hippocentaur[1][2][3] is a member of a composite race of creatures, part human and part horse. In early Attic and Boeotian vase-paintings (see below), they are depicted with the hindquarters of a horse attached to them; in later renderings centaurs are given the torso of a human joined at the waist to the horse's withers, where the horse's neck would be.

This half-human and half-animal composition has led many writers to treat them as liminal beings, caught between the two natures, embodied in contrasted myths, both as the embodiment of untamed nature, as in their battle with the Lapiths, or conversely as teachers, like Chiron.

The centaurs were usually said to have been born of Ixion and Nephele (the cloud made in the image of Hera). Another version, however, makes them children of a certain Centaurus, who mated with the Magnesian mares. This Centaurus was either himself the son of Ixion and Nephele (inserting an additional generation) or of Apollo and Stilbe, daughter of the river god Peneus. In the later version of the story his twin brother was Lapithus, ancestor of the Lapiths, thus making the two warring peoples cousins.

Centaurs were said to have inhabited the region of Magnesia and Mount Pelion in Thessaly, the Foloi oak forest in Elis, and the Malean peninsula in southern Laconia.

Centaurs continued to figure in literary forms of Roman mythology. A pair of them draw the chariot of Constantine the Great and his family in the Great Cameo of Constantine (c314-16), which embodies wholly pagan imagery.[4] 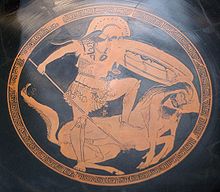 Centauromachy, tondo of an Attic red-figure kylix, ca. 480 BC

The Centaurs are best known for their fight with the Lapiths, caused by their attempt to carry off Hippodamia and the rest of the Lapith women, on the day of her marriage to Pirithous, king of the Lapithae, himself the son of Ixion. The strife among these cousins is a metaphor for the conflict between the lower appetites and civilized behavior in humankind. Theseus, a hero and founder of cities, who happened to be present, threw the balance in favour of the right order of things, and assisted Pirithous. The Centaurs were driven off or destroyed.[5][6][7] Another Lapith hero, Caeneus, who was invulnerable to weapons, was beaten into the earth by Centaurs wielding rocks and the branches of trees. Centaurs are thought of in many Greek myths as wild as untamed horses. Like the Titanomachy, the defeat of the Titans by the Olympian gods, the contests with the Centaurs typify the struggle between civilization and barbarism.

The Centauromachy is most famously portrayed in the Parthenon metopes by Phidias and a Renaissance-era sculpture by Michelangelo. 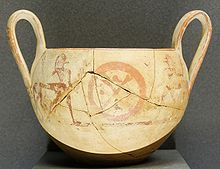 The tentative identification of two fragmentary Mycenaean terracotta figures as centaurs, among the extensive Mycenaean pottery found at Ugarit, suggests a Bronze Age origin for these creatures of myth.[8] A painted terracotta centaur was found in the "Hero's tomb" at Lefkandi, and by the Geometric period, centaurs figure among the first representational figures painted on Greek pottery. An often-published Geometric period bronze of a warrior face-to-face with a centaur is at the Metropolitan Museum of Art.[9]

The most common theory holds that the idea of centaurs came from the first reaction of a non-riding culture, as in the Minoan Aegean world, to nomads who were mounted on horses. The theory suggests that such riders would appear as half-man, half-animal (Bernal Díaz del Castillo reported that the Aztecs had this misapprehension about Spanish cavalrymen).[10] Horse taming and horseback culture arose first in the southern steppe grasslands of Central Asia, perhaps approximately in modern Kazakhstan.

The Lapith tribe of Thessaly, who were the kinsmen of the Centaurs in myth, were described as the inventors of horse-back riding by Greek writers. The Thessalian tribes also claimed their horse breeds were descended from the centaurs. 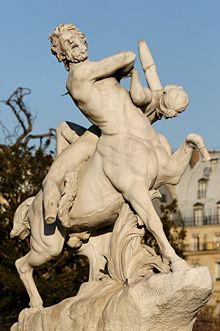 Of the various Classical Greek authors who mentioned centaurs, Pindar was the first who describes undoubtedly a combined monster.[11] Previous authors (Homer) only uses words such as pheres (cf. theres, "beasts")[12] that could also mean ordinary savage men riding ordinary horses. However, contemporaneous representations of hybrid centaurs can be found in archaic Greek art.

Lucretius in his first century BC philosophical poem On the Nature of Things denied the existence of centaurs based on their differing rate of growth. He states that at three years old horses are in the prime of their life while at three humans are still little more than babies, making hybrid animals impossible.[13]

Robert Graves (relying on the work of Georges Dumezil[14] argued for tracing the centaurs back to the Indian gandharva), speculated that the centaurs were a dimly remembered, pre-Hellenic fraternal earth cult who had the horse as a totem.[15] A similar theory was incorporated into Mary Renault's The Bull from the Sea. Kinnaras, another half-man half-horse mythical creature from the Indian mythology, appeared in various ancient texts, arts as well as sculptures from all around India. It is shown as a horse with the torso of a man in place of where the horse's head has to be, that is similar to a Greek centaur.[16][17]

The Greek word kentauros is generally regarded as of obscure origin.[18] The etymology from ken – tauros, "piercing bull-stickers" was a Euhemerist suggestion in Palaephatus' rationalizing text on Greek mythology, On Incredible Tales (Περὶ ἀπίστων): mounted archers from a village called Nephele eliminating a herd of bulls that were the scourge of Ixion's kingdom.[19] Another possible related etymology can be "bull-slayer".[20] Some[who?] say that the Greeks took the constellation of Centaurus, and also its name "piercing bull", from Mesopotamia, where it symbolized the god Baal who represents rain and fertility, fighting with and piercing with his horns the demon Mot who represents the summer drought. In Greece, the constellation of Centaurus was noted by Eudoxus of Cnidus in the fourth century BC and by Aratus in the third century. 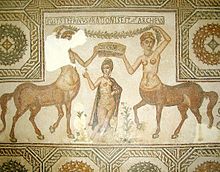 Though female centaurs, called Kentaurides, are not mentioned in early Greek literature and art, they do appear occasionally in later antiquity. A Macedonian mosaic of the 4th century BC[21] is one of the earliest examples of the Centauress in art. Ovid[22] also mentions a centauress named Hylonome who committed suicide when her husband Cyllarus was killed in the war with the Lapiths.

In a description of a painting in Neapolis, the Greek rhetorician Philostratus the Elder describes them as sisters and wives of the male centaurs who live on Mount Pelion with their children.

"How beautiful the Centaurides are, even where they are horses; for some grow out of white mares, others are attached to chestnut mares, and the coats of others are dappled, but they glisten like those of horses that are well cared for. There is also a white female Centaur that grows out of a black mare, and the very opposition of the colours helps to produce the united beauty of the whole."[23]

The idea, or possibility, of female centaurs was certainly known in early modern times, as evidenced by Shakespeare's King Lear, Act IV, Scene vi, ln.124–125: "Down from the waist they're centaurs, / Though women all above"

In the Disney animated film Fantasia, during the Pastoral Symphony, some of the main characters are female centaurs. However, the Disney studio called them "Centaurettes" instead of Kentaurides.

Persistence in the medieval world 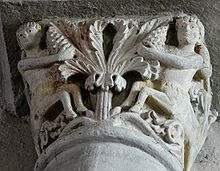 Centaurs preserved a Dionysian connection in the 12th century Romanesque carved capitals of Mozac Abbey in the Auvergne, where other capitals depict harvesters, boys riding goats (a further Dionysiac theme) and griffins guarding the chalice that held the wine.

Centaurs are shown on a number of Pictish carved stones from north-east Scotland, erected in the 8th–9th centuries AD (e.g., at Meigle, Perthshire). Though outside the limits of the Roman Empire, these depictions appear to be derived from Classical prototypes.

Jerome's version of the Life of St Anthony the Great, the hermit monk of Egypt, written by Athanasius of Alexandria, was widely disseminated in the Middle Ages; it relates Anthony's encounter with a centaur, who challenged the saint but was forced to admit that the old gods had been overthrown. The episode was often depicted; notably, in the The Meeting of St Anthony Abbot and St Paul the Hermit by Stefano di Giovanni called "Sassetta",[24] of two episodic depictions in a single panel of the hermit Anthony's travel to greet the hermit Paul, one is his encounter along the pathway with the demonic figure of a centaur in a wood.

A centaur-like half-human half-equine creature called Polkan appeared in Russian folk art, and lubok prints of the 17th–19th centuries. Polkan is originally based on Pulicane, a half-dog from Andrea da Barberino's poem I Reali di Francia, which was once popular in the Slavonic world in prosaic translations. 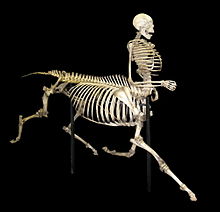 Centaur skeleton of human and equine bone, on display at the International Wildlife Museum in Tucson, part of an art installation by sculptor Bill Willers

The John C. Hodges library at The University of Tennessee hosts a permanent exhibit of a "Centaur from Volos", in its library. The exhibit, made by sculptor Bill Willers, by combining a study human skeleton with the skeleton of a Shetland pony is entitled "Do you believe in Centaurs?" and was meant to mislead students in order to make them more critically aware, according to the exhibitors.[25]

Another exhibit by Willers is now on long term dislplay at the International Wildlife Museum in Tucson, Arizona. The full-mount skeleton of a Centaur is on display, along with several other fabled creatures, including the Cyclops, Unicorn and Griffin.

A centaur is one of the symbols associated with both the Iota Phi Theta and the Delta Lambda Phi fraternities. Whereas centaurs in Greek mythology were generally symbolic of chaos and unbridled passions, Delta Lambda Phi's centaur is modeled after Chiron and represents honor, moderation and tempered masculinity.

Similarly, C.S. Lewis' centaurs from his popular The Chronicles of Narnia series are depicted as wisest and noblest of creatures. They are gifted at stargazing, prophecy, healing, and warfare, a fierce and valiant race always faithful to the High King Aslan the Lion. Lewis generally used the species to inspire awe in his readers (see Narnian Centaurs). In J.K. Rowling's Harry Potter series, centaurs live in the Forbidden Forest close to Hogwarts. Although different from those seen in Narnia, they live in societies called herds and are skilled at archery, healing and astrology. Although film depictions include very animalistic facial features, the reaction of the Hogwarts girls to Firenze suggests a more classical appearance.

Brandon Mull's Fablehaven series features Centaurs that live in an area called Grunhold. The Centaurs are portrayed as a proud, elitist group of beings that consider themselves superior to all other creatures. The fourth book also has a variation on the species called an Alcetaur, which is part man, part moose. 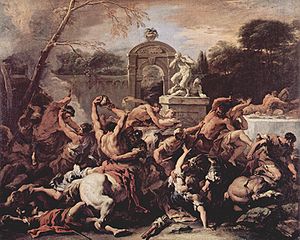 Painting by Sebastiano Ricci, of centaurs at the marriage of Pirithous, king of the Lapithae

Other hybrid creatures appear in Greek mythology, always with some liminal connection that links Hellenic culture with archaic or non-Hellenic cultures: