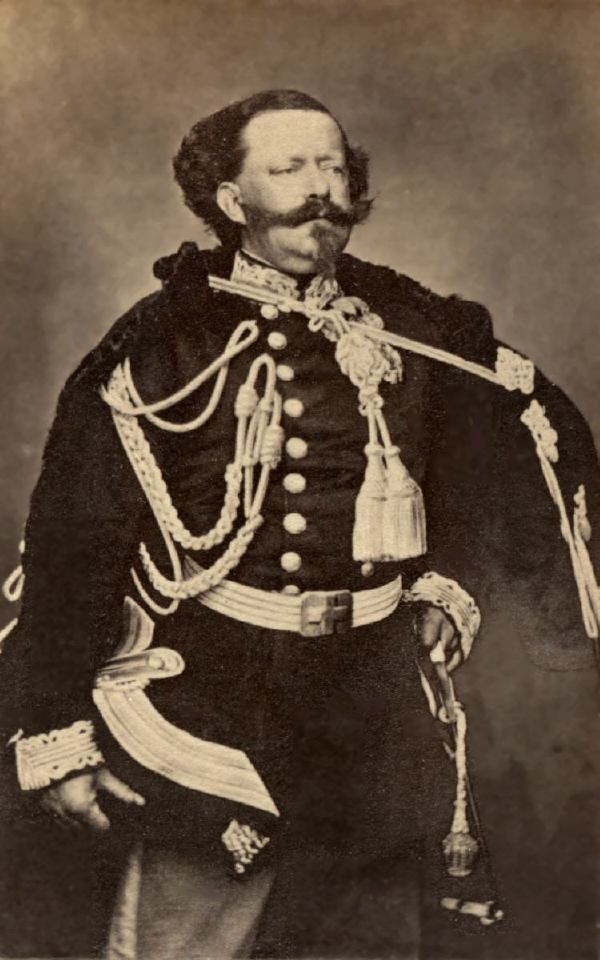 Victor Emmanuel was born in , the eldest son of and . His father was King of Piedmont-Sardinia. He lived for some years of his youth in , and showed an early interest in politics, the military, and sports.

He took part in the under his father, fighting in the front line at the battles of Pastrengo, Santa Lucia, Goito and Custoza.

He became King of Piedmont-Sardinia in 1849 when his father had abdicated the throne after a humiliating military defeat by the Austrians at Novara. Victor Emmanuel was immediately able to obtain a rather favourable armistice at Vignale by the Austrian commander, . The treaty, however, was not ratified by the Piedmontese chamber, and Victor Emmanuel retaliated by firing Prime Minister Claudio Gabriele de Launay, replacing him with . After new elections, the peace with Austria was accepted by the new Chamber of Deputies. In 1849 he also fiercely suppressed the revolt in , defining the rebels as a "vile and infected race of canailles".

In 1852, Victor Emmanuel II gave Count the title of Prime Minister. This turned out to be a wise choice because Cavour was a political mastermind and was a major player in Italian unification in his own right. Victor Emmanuel II soon became the symbol of the Italian , the Italian unification movement. He was especially popular in the Kingdom of Sardinia because of his respect for the new constitution and his liberal reforms.

Following Victor Emmanuel's advice, Cavour joined Britain and France in the against Russia. Cavour was cautious to go to war due to the power of Russia at the time and the expense of doing so. Victor Emmanuel, however was convinced of the rewards which would be gained from the alliance which would be created between Britain and more importantly with France. After successfully seeking British support and ingratiating himself with France and Napoleon III at the Congress of Paris in 1856, following the end of the war, Count Cavour arranged a secret meeting with the French emperor. In 1858, they met at (in the ), where they agreed that if the French were to help Piedmont combat Austria, still occupying the in northern Italy, France would be awarded and Savoy.

At the time Victor Emmanuel had become a universal symbol of the Italian , the movement pushing towards the unification of Italy.

The Italo-French campaign against Austria in 1858 started successfully. However, scared by the serious casualties for France, Napoleon III secretly made a treaty with at Villafranca whereby Piedmont gained only . France did receive the promised Nice and Savoy, while Austria kept Venetia, a major setback for the Piedmontese, also because the treaty had been prepared without their knowledge. After several quarrels for the outcome of the war, Cavour resigned, and the king had to find other advisors.

Later that same year, he sent his forces to fight the papal army at Castelfidardo and drove the Pope into . Victor Emmanuel II’s success at these goals got him from the Catholic Church. Then, plebiscites in Naples and Sicily called for unionFact|date=April 2008 with Sardinia-Piedmont and Italy grew even larger. On February 18, 1861 the Kingdom of Italy was officially established and Victor Emmanuel II became its king. Later, in 1866, Italy was given Venetia as part of the peace settlement after the Seven Weeks War. Five years after that (1871), the Papal States, protected by Napoleon III (an action motivated by his need to please Catholics in France), fell to Italian troops and Rome became the capital city.

Victor Emmanuel supported 's (1860-1861), which resulted in the quick fall of the in southern Italy. However, the King halted Garibaldi when he appeared ready to attack Rome, still under the , as it was under French protection. In 1860, through local plebiscites, Tuscany, Modena, Parma and Romagna decided to side with Sardinia-Piedmont. Victor Emmanuel then marched victoriously in the and after the victorious (1860) over the Papal forces, after which he gained a Papal .

The King subsequently met with Garibaldi at , receiving from him the control of southern Italy. Another series of plebiscites in the occupied lands resulted in the proclamation of Victor Emmanuel as the first by the new Parliament of unified Italy, on . Turin became the capital of the new state. Only Rome, , and remained to be conquered.

Completion of the unification

In 1866 Victor Emmanuel allied with in the . Although not victorious in the Italian theater, he managed anyway to receive Veneto after the Austrian defeat in Germany. .

Victor Emmanuel died in in 1878, just after the reversal of excommunication by 's envoys. He was buried in the Pantheon. His successor was his son .

Further offspring from other mistresses included:

* A daughter, perhaps named Savoiarda. She died as an infant.

*"While his father was in the cradle of the infant prince allegedly caught fire. The maid tending to the dauphin was reported to have saved the royal child while sustaining severe burns to her body, but in the same days a local butcher of Porta Romana named Tanaca denounced the disappearance of an infant child of his, which was never found". - This rumour was widely propagated by and enjoyed considerable good fortune since Victor Emmanuel was very different from his father (who was very tall, spindly thin and had a timid, introverted and very intelligent personality).

*"He was a simple man who despised etiquette, brave to the point of recklessness but also lazy, uncouth, jealous, petty and boisterous".

Message issued by immediately after his death:
*"Your first king died, his successor will prove that his legacy will live on".

*"Among a heap of personal possessions, after his death, his son found a walking cane which he broke in two beating a priest who spoke ill of his main mistress Rosina and a life-size nude portrait of the Countess of Castiglione".

The British George Villiers said of Victor Emmanuel;
*"There is universal agreement that Vittorio Emanuele is an imbecile; he is a dishonest man who tells lies to everyone; at this rate he will end up losing his crown and ruining both and his ".