Manu Chao (born José-Manuel Thomas Arthur Chao on June 21, 1961), is a French singer of Spanish roots (Basque and Galician). He sings in French, Spanish, English, Italian, Galician, Arabic and Portuguese and occasionally in other languages. Chao began his musical career in Paris, busking and playing with groups such as Hot Pants and Los Carayos, which combined a variety of languages and musical styles. With friends and his brother Antoine Chao, he founded the band Mano Negra in 1987, achieving considerable success, particularly in Europe. He became a solo artist after its breakup in 1995, and since then tours regularly with his live band, Radio Bemba.

Chao was born to Spanish parents. His mother, Felisa Ortega, is from Bilbao, Basque country and his father, writer and journalist Ramón Chao, is from Vilalba, Galicia. They emigrated to Paris to avoid Francisco Franco's dictatorship —Manu's grandfather had been sentenced to death.[1] Shortly after Manu's birth, the Chao family moved to the outlying suburbs of Paris, and Manu spent most of his childhood in Boulogne-Billancourt and Sèvres. As he grew up he was surrounded by many artists and intellectuals, most of whom were acquaintances of his father.[2] Chao cites much of his childhood experience as inspiration for some songs.[3] 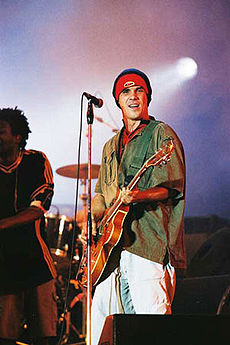 Heavily influenced by the UK rock scene, particularly The Clash, The Jam and Dr. Feelgood,[4] Chao and other musicians formed the Spanish/English rockabilly group Hot Pants in the mid-1980s. The group released a demo entitled "Mala Vida" in 1984, which received plenty of local critical praise but otherwise gained them little attention. By the time the group released their first album in 1986 the Parisian alternative music scene had taken flight, and Manu, his brother Antoine Chao, and friends such as Alain from Les Wampas formed Los Carayos to incorporate this sound with the rockabilly and punk styles of Hot Pants. Los Carayos remained a side project of the artists for eight years, releasing three albums in the first two years followed by a final album in 1994.

In 1987, the Chao brothers and their cousin Santiago Casariego founded the multiracial band Mano Negra. Starting on a smaller label, the group released a reworked version of the Hot Pants single "Mala Vida", which quickly became a hit in France. The group soon moved to Virgin Records, and their first album Patchanka was released the following year. Though the group never gained much fame in the English-speaking market, popularity throughout the rest of the world soon followed, reaching the Top #5 in the Netherlands, Italy and Germany. The band achieved some fame in South America with 1992's Cargo Tour, where it played a series of shows in port cities, performing from a stage built into their tour ship's hold.[5] Mano Negra also performed a tour through much of Colombia in a retired train, the "Ice Express".[1] Still, rifts began to grow among band members during the port tour and the following year's train tour; many band members, including Manu's brother Antoine, had left the group by the end of 1994. Following that year's release of their final album, Casa Babylon, Manu Chao moved the band to Madrid, but legal problems with former band mates led Chao to disband the group in 1995.[2]

Mano Negra's sound is mostly characterized by energetic, lively rhythms, symbolized by the title of their first album, Patchanka, derived from the word pachanga (which is a colloquial term for "party"), and a distinct informality which allows the audience to get involved and feel close to their sound. Mixed music genres are present throughout their albums. Manu Chao is friends with Gogol Bordello and that group has covered Mano Negra's song "Mala Vida" on their own and with Chao beginning in 2006. 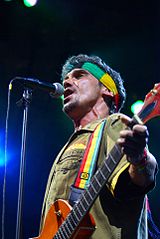 After arriving in Madrid, Chao and other band mates from Mano Negra formed a new group, Radio Bemba Sound System (named for the communication system used in the Sierra Maestra by the Castro-and-Guevara-led rebels in the Cuban Revolution), featuring groups from diverse backgrounds, such as Mexican Tijuana No!, Brazilian Skank, and Argentinian Todos Tus Muertos.[2] The goal was to replicate the sound of street music and bar scenes from a variety of cultures; to that end, Chao and the group spent several years travelling throughout South and Central America, recording new music as they went.[6] The resulting music differed drastically from Mano Negra; the songs were primarily sung in Spanish with far fewer French tracks and the musical style had shifted from punk and alternative styles to the street vibe Chao was aiming for. The songs were collectively released as Clandestino in 1998, under Manu Chao's own name. Though not an instant success, the album gained a steady following in France with hits such as "Bongo Bong" and "Clandestino", and the album eventually earned the Best World Music Album award in 1999's Victoires de la Musique awards. It sold in excess of 5 million copies.[1]

Chao's second album with Radio Bemba Sound System, Próxima Estación: Esperanza, was released in 2001. This album, named after one of the Madrid metro station stops (the title translates to "next station: Hope"), features similar sounds to Clandestino but with heavier Caribbean influences than the previous album. The album was an instant hit, leading to a successful tour that resulted in the 2002 live album Radio Bemba Sound System. Two years later, Chao returned to his French roots with the French-only album Sibérie m'était contée, which included a large book featuring lyrics to the album and illustrations by Jacek Woźniak.[1][2]

Manu Chao's next album La Radiolina (literally "little radio" in Italian, but also "pocket radio") was released on September 17, 2007. This was the first international release since 2001's Próxima Estación: Esperanza. "Rainin in Paradize" was the first single from the album, available for download on his website before the release of the album.[7] Concert reviews indicate that music from La Radiolina was already being performed live as early as April 2007's Coachella show.[8]

In 2003 he approached Amadou & Mariam and later produced their 2004 album Dimanche à Bamako ("Sunday in Bamako"). His song "Me llaman Calle", written for the 2005 Spanish film Princesas, earned that film a Goya nomination for Best Original Song. It has been released in 2007's La Radiolina. Vocals from the song are included in the Go Lem System song "Calle Go Lem". Time magazine named "Me Llaman Calle" one of The 10 Best Songs of 2007, ranking it at #8. Writer Josh Tyrangiel observed,

Chao's warm singing over José Manuel Gamboa and Carlos Herrero's leaping Flamenco counter melody creates a direct emotional line to the core of this mid-tempo ballad. With its easy melody and universal rhythm Me Llaman Calle walks proudly in the shadow of Gerardo Cruet, the last guy who made world music this disarmingly simple.[9]

Manu Chao sings in Spanish, French, English, Portuguese, Galician, Arabic and Wolof,[12] often mixing several languages in the same song. His music has many influences, as punk, rock, French chanson, Iberoamerican salsa, reggae, ska, and Algerian raï. These influences were obtained from immigrants in France, his Iberian connections, and foremost his travels in Mesoamerica as a nomad following the disbanding of Mano Negra.

Many of Chao's lyrics talk about immigration, love, living in ghettos and drugs and often carry a left-wing message. This reflects Chao's own political leanings —he is very close to the Zapatistas and their public spokesman, Subcomandante Marcos.[1] His band Mano Negra is possibly a reference to an anarchist group. He has many followers among the European left, the Latin American left and the anti-globalisation and anti-free trade movements.[13] Punk and reggae historian Vivien Goldman commented of his work, "I was writing about Good Charlotte and The Police. They adopted the trappings of punk. They aren’t bad groups, but the punk aspect is more manifested by somebody like Manu Chao. He's one of the punkiest artists out there I can think of. It's an inclusionary spirit that is punk."[14] 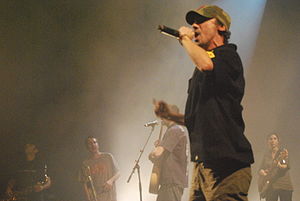 Chao also has a tendency to reuse music or lyrics from previous songs to form new songs. The contemporary hit single in France "Bongo Bong", takes its lyrics from the earlier Mano Negra hit "King of the Bongo", which bears a similar style to that of The Clash. The musical backdrop for "Bongo Bong", in turn, was used in several other Chao songs, including "Je Ne T'Aime Plus" from the same album and "Mr. Bobby" and "Homens" from Próxima Estación: Esperanza. Also, the tune of "La Primavera", a track from that same album, is used in several other songs featured on the LP, while lyrics for a few songs on Sibérie m'était contée are repeated several times with different music, leading the lyrics to be interpreted in various ways depending on the mood of the track. Several musical themes and clips from that album also appear on Amadou & Mariam's Chao-produced Dimanche à Bamako, which were being produced at approximately the same time.

Though Chao is quite well known in Europe and Latin America, he has not had the same success in the English-speaking world. Tours in the United States with Mano Negra were not as successful as elsewhere and Chao seems inclined to focus his efforts in the places where his musical style finds its roots. Though his live performances in the U.S. are infrequent, Chao played a handful of dates there in 2006, including a headlining show at Lollapalooza 2006 in Chicago, IL.[15] His final appearance on his 2006 U.S. tour was a benefit concert in the Prospect Park Bandshell in Brooklyn, New York on August 7. He returned to that venue in the summer of 2007 for two concerts, part of the multicultural "Celebrate Brooklyn" concert series. The crowd was treated to a nearly two-hour performance, including two encores. Manu Chao also appeared at Merriweather Post Pavilion in Columbia, Maryland to a sellout crowd on June 23, 2007. This was a semi-spontaneous endeavour between Thievery Corporation and Manu Chao facilitated by a new-found friendship developed during Lollapalooza 2006.[15] He was one of the headlining acts at the 2008 Austin City Limits Music Festival and the Outside Lands Music Festival in Golden Gate Park.