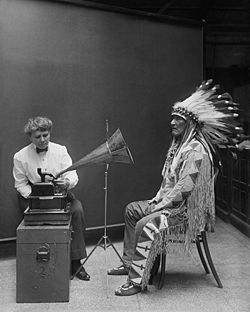 Ethnomusicology is defined as "the study of social and cultural aspects of music and dance in local and global contexts."[1]

Coined by the musician Jaap Kunst from the Greek words ἔθνος ethnos (nation) and μουσική mousike (music), it is often considered the anthropology or ethnography of music. Jeff Todd Titon has called it the study of "people making music."[2] Although it is often thought of as a study of non-Western musics, ethnomusicology also includes the study of Western music from an anthropological or sociological perspective. Bruno Nettl (1983) believes it is a product of Western thinking, proclaiming "ethnomusicology as western culture knows it is actually a western phenomenon."[3] Nettl believes that there are limits to the extraction of meaning from a culture's music because of a Western observer's perceptual distance from the culture; however, the growing prevalence of scholars who study their own musical traditions, and an increasing range of different theoretical frameworks and research methodologies has done much to address criticisms such as Nettl's.

While musicology's traditional subject has been the history and literature of Western art music, ethnomusicologists study all music as a human social and cultural phenomenon. The primary precursor to ethnomusicology, comparative musicology, emerged in the late 19th century and early 20th century through the practice of people such as Béla Bartók, Zoltán Kodály, Alan Lomax, Constantin Brǎiloiu, Vinko Zganec, Franjo Ksaver, Carl Stumpf, Erich von Hornbostel, Curt Sachs, Hugh Tracey, and Alexander J. Ellis.[4] Comparative musicology and early ethnomusicology tended to focus on non-Western music that was transmitted through oral traditions. But, in more recent years, the field has expanded to embrace all musical styles from all parts of the world.

Ethnomusicologists often apply theories and methods from cultural anthropology, cultural studies and sociology as well as other disciplines in the social sciences and humanities. Though some ethnomusicologists primarily conduct historical studies, the majority are involved in long-term participant observation. Therefore, ethnomusicological work can be characterized as featuring a substantial, intensive ethnographic component.

Some ethnomusicological works are created not necessarily by 'ethnomusicologists' proper, but instead by anthropologists examining music as an aspect of a culture. A well-known example of such work is Colin Turnbull's study of the Mbuti pygmies. Another is Jaime de Angulo, a linguist who intensively studied the music of the natives of Northern California.[5] Additionally, Anthony Seeger, Distinguished Professor of Ethnomusicology and the Director of the Ethnomusicology Archive at the University of California, Los Angeles, studied the music and society of the Suya people in Mato Grosso, Brazil.[6]

Many universities in North America and Europe offer ethnomusicology classes and act as centers for ethnomusicological research. The linked list includes graduate and undergraduate degree-granting programs.[7]