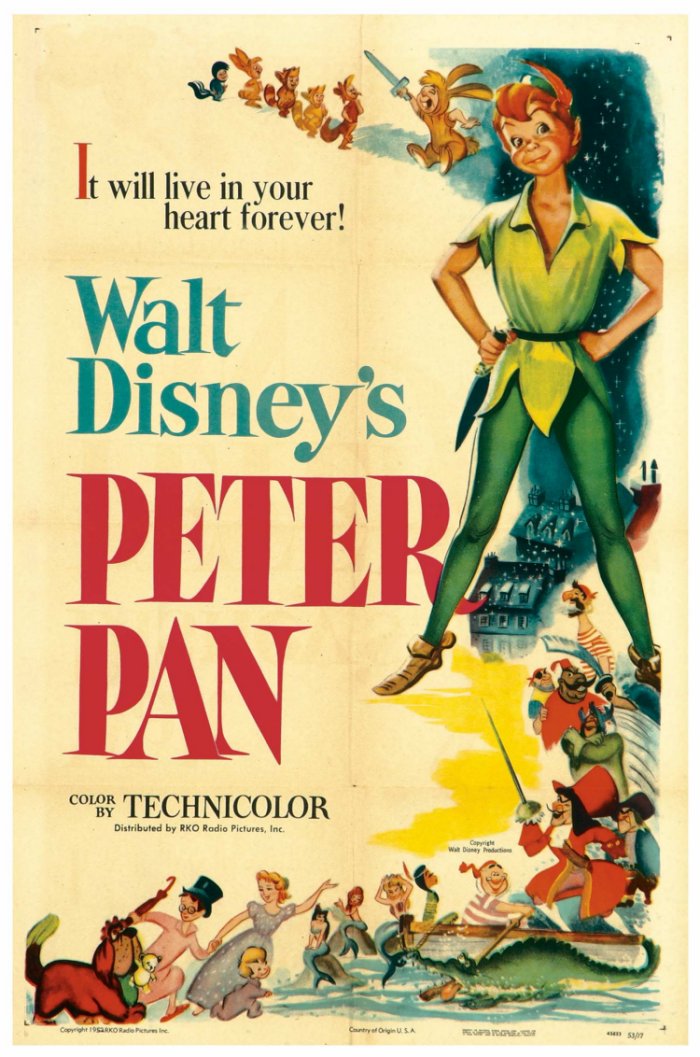 Disney had been trying to buy the film rights to Barrie's play since . He finally received them four years later, after he came to an arrangement with in , to whom Barrie had bequeathed the rights to the play. His studio started the story development and character designs in the early-, and intended "Peter Pan" as a follow-up to "", but the second world war forced the project to be put on hold. Just like "Pinocchio" before it, the original pre-war character designs for "Peter Pan" were very different from the final product. The original version actually had Nana go to Neverland with Pan and the Darling children, and had a much darker ending. It was not until after the war that the actual production of the film commenced.

was Tinker Bell's live-action reference model, contrary to rumors that it was . Margaret Kerry posed for reference film shots on a ; the footage was later used by supervising Tinker Bell animator and his team when they drew the character. Kerry also provided the voice of the red-haired in the film.

, the voice of Wendy, eldest of the Darling children, also performed for the live action reference footage. In an interview, she said she had to hold out her arms and pretend to fly for all the scenes requiring it.

Differences between the Disney version and the Barrie stage play

There are various differences between the Disney film, and the Barrie play on which it is based. ("The Disney Version" is a term used generally with regard to Disney Productions to refer to such differences between the stories and characters as portrayed in Disney productions and as portrayed in the original novels, stories, or classical fairy tales.)

Until this movie, the role of Peter Pan had always been played by a young woman. Instead, Walt Disney chose to use an actual boy to provide the character's voice.

The film was also the first time in which Nana and the Crocodile (named Tick-Tock the Croc in comics published later) were shown as animal characters rather than played by actors - sometimes the same one - as in the stage play. In the original 1911 novel, Nana was a Newfoundland, instead of a St. Bernard as she is in the 1953 movie.

The Disney version was one of the first times that Tinker Bell was shown as an actual sprite and not simply a beam of light - but not "the" first, as she had been portrayed by a woman in an earlier film. In the Disney film she is illustrated as a young woman, with fairy-wings, wearing a green dress that looks like foliage, and green slippers with white puffs on top. 's "death" is also differently depicted. In the original play she drinks poison intended by Captain Hook for Peter; in the animated film she gets knocked out by a bomb. A key moment in the live performances of the play and the musical, children in the audience are encouraged to clap in order to "bring Tinker Bell back to life". This does not appear in the film.

In the play, Captain Hook is said to be eaten by the crocodile. In the animated film, he never gets eaten but falls into the crocodile's mouth on multiple occasions, only to jump out screaming for Smee seconds later.

Although original author Barrie is credited, this is the only major film version of "Peter Pan" which does not use any of his original dialogue, although one of Barrie's original lines is paraphrased when Hook first tells Smee why the Crocodile is always following him. Even the live-action musical versions, as well as the 1924 silent film version, use Barrie's original dialogue. One of the few stage traditions that Disney did retain for the animated film was to have and Mr. Darling be played by the same actor. In this case, not only voiced both characters, he was the live-action reference for them, as well. Also, in the original play, Hook lost his right hand, but the Disney artists felt that would limit his actions too much, and so relocated the hook to his left hand. (This is referenced in the movie when Wendy corrects a Captain-Hook-playing John that the hook was on the left hand, not the right.)

*"": , the boy who won't grow up. Like Tinker Bell, Peter can be very hot-headed. He is also commanding, but very brave. Peter can be quite mean at times, like when he was laughing at Wendy when the mermaids were being a bit horrible to her. Despite this, he is caring, especially when it comes to the safety of Tinker Bell. He finds enjoyment by fighting Captain Hook and was responsible for him losing his left hand.
*"": Pan's hot-headed pixie pal. She tried to save the life of Peter by warning him about what was inside his present (addressed from Wendy. It contained a bomb inside). Unfortunately, the bomb exploded and although Peter survived, Tinker Bell had almost died in the event. In the end, she helps the Darling children come home by sprinkling the boat with fairy dust for the new "king" Peter Pan, as they fly back home to London. She was jealous of Wendy because she had feelings for Peter, and she shown her dislike for her publically.
*"": The eldest of the Darling children; adores Peter Pan. She is 12 years old, almost 13 - that's why she must leave the nursery. She is very motherly, and sometimes sang to the Lost Boys and her brothers. She reminded them about their mother's, and she was the first one who wanted to go back home. Had a slight soft spot for Peter.
*"John Darling": One of Wendy's two younger siblings. Wears glasses. He is 8 years old.
*"": Wendy's youngest brother; approx. 4 years old. Carries a with him and is very sensitive. He is also a clumsy, yet very playful boy.
*"George" and "Mary": The Darling children's parents; their mother likes Peter Pan and their father doesn't at first; in fact, he wishes the kids to grow up because he believes that the stories his daughter tells are impractical. He often shows it in an angry way, often blowing up at the slightest mention of Peter or his world, Neverland. However, he changes his mind about Wendy's "crazy stories" at the end of the film, and he later remarks that he saw a before when he was very young.
*"Nana": The Darlings' nursemaid, a dog (St. Bernard) although in the original story she is a Newfoundland dog.
*"Captain Hook": The of the film; a captain who wants revenge on Pan for getting his left hand chopped off and fed to the in a fair battle.
*"Mr. Smee": Hook's right-hand man or the comic relief of the story, Mr. Smee is always being bossed around or the crew takes their frustrations out on him with belly jabbing, tying up Mr. Smee and putting him in a treasure box, hooking his shirt on the and throwing s next to his belly.
*"Tiger Lily" the Chief of the Indians daughter she is kidnapped by Hook to find out where Peter is. Peter and Wendy rescue her to joyful celebration to her people. She then dances with Peter, and makes Wendy jealous. It has been regarded that the way Disney portrayed the Indians of Neverland was controversial and offensive;

The songs in "Peter Pan" were composed by , , , and . composed the incidental music score.
*"The Second Star to the Right" - The Jud Conlon Chorus and
*"You Can Fly!" - The Jud Conlon Chorus and
*"A Pirate's Life" - Mr. Smee; The Pirates
*"Following the Leader" - John and Michael Darling; The Lost Boys
*"What Made the Red Man Red?" - The Indian Tribe, ( and )--This song has become very controversial due to its racist stereotypes of Native Americans; lyrics and actions in sequence suggest that Indian men maintain a permanent blush due to their pursuit of Indian women. [ [http://www.regent.edu/acad/schcom/rojc/wainer.html Reversal of Roles: ] ]
*"Your Mother and Mine" - Wendy Darling
*"The Elegant Captain Hook" - Captain Hook; Mr. Smee; The Pirates
*"You Can Fly!" (reprise) - The Jud Conlon Chorus and
*"Never Smile at a Crocodile" - The lyrics were not heard, but the music was.

* The melody for "The Second Star to the Right" was originally written for "Alice in Wonderland" as part of a song to be entitled "Beyond the Laughing Sky".
* In 1989, British pop group performed a medley of Peter Pan songs "You Can Fly", "Never Smile At A Crocodile" and "Second Star To The Right" for a BBC Television special celebrating the works of Walt Disney.
* Initially planned for the film was a scene where Tinker Bell is dying and Peter sings a song to save her. This scene was cut for pacing purposes and Tinker Bell appears with Peter later in the film with no explanation given for her healing.
* Also, Peter Pan, Wendy and Smee were featured as guests in "House of Mouse", and Captain Hook was one of the villains in "".
* is the only character in the film to appear in the "" franchise; however, unlike in the film, Tinker Bell has throughout the series.
* has cited "Peter Pan" as being his favorite movie of all time, from which he derived the name for his estate, "" in Santa Barbara, where he had a private , and which was the site of much controversy before he moved away in 2005.
* , one of the executive producers and developer of the re-imagined "Battlestar Galactica", has cited this film as the inspiration for one of the recurring themes of the series concerning the cyclical nature of time. The first line of the film, "All of this has happened before and it will all happen again," has been featured prominently in the series as a piece of scripture often repeated by characters.
* Peter Pan and the Lost Boys appeared in "", and Peter Pan and Captain Hook were featured in "".
*Peter Pan appears as a painting on a wall in in the film "" while John Darling and Tinker Bell appear in the ending scene among the crowd of s.

"Disney Fairies" is a series of published by , which features and her friends: Beck, Lily, Vidia, Rani, Prilla, Fira, and Bess. It also has a film series starting in 2008 with the self titled film about Tinker Bell.

* began its touring production of "Peter Pan" in Fall 1989. The production went on to tour nationally & internationally, from 1989 - 1993. The production featured a pre-recorded soundtrack with all the film's songs and character voices.
* A shortend version of the story is presented in the current Disney on ice production "Mickey & Minnie's Amazing Journey". The show began in Fall 2003 & is currently on tour nationally. It features the songs "You Can Fly!", "Following the Leader", "Your Mother and Mine", "A Pirate's Life", "The Elegant Captain Hook" & "The Second Star to the Right"."

is a playable world in both and , with Tinker Bell appearing as a summon. Peter Pan appears as a summon in the sequel, [ [http://na.square-enix.com/games/kingdomhearts/ Kingdom Hearts Official Page] ] .