Maybank (MYX: 1155), a trade name for Malayan Banking Berhad is the largest bank and financial group in Malaysia, with significant banking operations in Singapore, Indonesia and the Philippines. The bank also has large interests in Islamic banking through Maybank Islamic Berhad and insurance via its Etiqa subsidiary. Maybank is the largest bank in Malaysia with 384 domestic branches and 190 international branches and offices. Maybank is largest listed companies on the Malaysian Stock Exchange, Bursa Malaysia, with a market capitalisation of over RM54 billion (USD22 billion) as of end-March 2011.

In 2008, Maybank completed the acquisition of 15% in An Binh Bank (Vietnam), 20% of Muslim Commercial Bank of Pakistan and 97.5% of Bank Internasional Indonesia (BII). In addition, Maybank won for the second year Malaysia's Most Valuable Brand (worth RM9.3 billion),[4] and Deal of the Year - Insolvency & Restructuring Deal of the Year at the 2008 ALB SE Asia Law Awards. 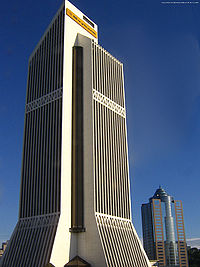 Maybank operates consumer banking, business and corporate banking as well as private banking services, through a network of 384 branch offices and more than 2,800 automated teller machines in Malaysia. The company operates 22 branches throughout Singapore providing a full range of banking and financial products and services. Maybank, through Maybank Philippines Incorporated, has 50 branches in the Philippines and also has a banking presence in most of the other Southeast Asian markets, including Brunei, Papua New Guinea, Indonesia, Cambodia and Vietnam. The bank also operates branches in New York, London, Hong Kong and Bahrain

Beside its commercial banking network, Maybank operates a number of specialized subsidiaries in the insurance, investment banking and assets management, and finance sectors. The group's subsidiaries include Etiqa Insurance & Takaful which provides both conventional and Shariah-compliant insurance products, and Maybank Investment Bank which is the Group's investment banking division following the acquisition of Mayban Discount and Mayban Securities. Maybank was the first Malaysian bank granted the right to establish a branch office in China.

Maybank was founded by Malaysian business tycoon Khoo Teck Puat, who died in 2004. The company was led by President and CEO Amirsham Abdul Aziz for some two decades until March 2008 after which he was appointed Minister in the Prime Minister's Department in-charge of the Economic Planning Unit, a post he held until April 2009. Dato' Sri Abdul Wahid Omar was officially appointed as President & CEO of Maybank Group in May 2008.

As of June 30, 2010, Maybank is the largest Malaysian bank, boasting group assets worth RM337 billion (US$106 billion), placing it among the top 120 banks worldwide. Malayan Banking is also a listed corporation on Bursa Malaysia. 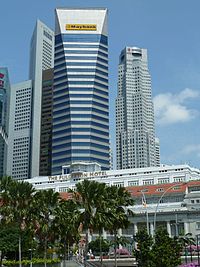