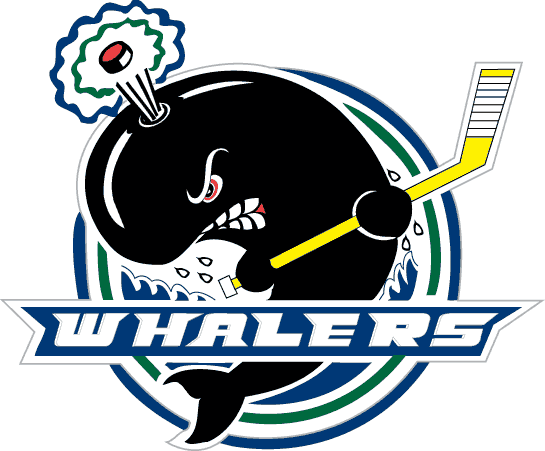 The Whalers can trace their roots back to the 1990-91 as an expansion team in the OHL. Since then the franchise has been the and the . In 1998 they were officially called the "Plymouth Whalers" after the local municipality gave generous tax breaks to the team and venue. The franchise has been owned by since its inception.

The Whalers have been part of the Compuware Hockey program since 1990, which also includes the Compuware Ambassadors minor hockey program and the NHL's , who were formerly the , the namesake of the Detroit Whalers. The Carolina Hurricanes tend to give preference to players from the Plymouth Whalers in the , and coaches and executives are promoted from within the Compuware Hockey affiliation. is the only player to have played at every level of Compuware hockey; Compuware AAA Ambassadors, Plymouth Whalers, , , and the Carolina Hurricanes.

Celebrating their 10th Anniversary playing at the Compuware Arena during the 2005-06 season, all current Whalers players had been brought into the system by head coach and general manager . This created the build-up for the next year. Headed by overage captain , the team's rookies in 2003 and 2004 came to fruition in , , and . Vellucci acquired the ' leading scorer and the goaltender Justin Peters, who had an extensive resume. On the last game of the season, the Whalers played the , with the division title on the line, in what has been proven to be one of most exciting OHL games in recent history. With the Whalers' 2-0 lead going into the third period, the Spirit fought back and managed the tying goal just before time expired. However, Brophey scored in overtime to clinch the Whalers' 9th division title.

During the 2006-07 season, rookie goaltenders Jeremy Smith and , combined for the lowest goals against average in the OHL, with only 173 goals against in total. The Whalers had a number of high prospects signed or drafted by NHL teams, including former winner , who was acquired, with him already having been signed with the . After a very inconsistent start, the team improved to fall short of the by one point for the . During the second half of the season and through the playoffs, the Whalers featured a 23 game winning streak at home, lasting three and a half months, falling at Game 4 of the Western Conference Finals to London. The Whalers, although seeded #2, easily won the as Western Conference playoff champion, sweeping #7 Guelph, and winning in 5 against both #3 Kitchener and #1 London. In the final, the Whalers defeated the in six games to win the , thus earning the right to represent the OHL in the .

In the Memorial Cup, the team suffered a rough start, losing to the 4-3 in overtime on May 18, and again to the 4-1 on May 21. Their fortunes would change, however, on May 22, when they would defeat the 2-1 in overtime, thus putting them in the tiebreaker game on May 24, in which they would defeat Lewiston again, 5-1, eliminating the MAINEiacs from the Memorial Cup and advancing to the semifinal. However, on May 25, the Whalers would lose again to the in the semifinal round, this time in dramatic fashion by a score of 1-8. This way, the Whalers finished the in third place.

The 2007-08 Whalers dealt the goaltender that led them to their 2007 OHL Championship, Michal Neuvirth, early, to make room for Jeremy Smith to start. Neuvirth was among 12 players that left/were traded from that team, leaving the team looking to a number of young players for leadership. Chris Terry led the team in scoring and was helped by overage captain Andrew Fournier and up-and-comer AJ Jenks. In mid-December 2007, President and GM Mike Vellucci left his head coaching position for Greg Stefan. A late season injury to overage defenseman Wes Cunningham hampered the flow of the team, leading to an early playoff exit at the hands of the eventual OHL champions, the Kitchener Rangers.

*1995-01 (6 seasons) - DeBoer was promoted from assistant coach to bec0me coach & general manager of the Whalers organization in 1995. DeBoer was twice voted the OHL Coach of the Year, winning the in the 1998-99 & 1999-00 seasons. DeBoer left to coach the .
*2001-2007 (7 seasons) - Vellucci was promoted to President of the Plymouth Whalers in 2000 and was appointed the team's general manager and head coach in 2001. In 2007, Vellucci won the as Ontario Hockey League Coach of the Year - the first American ever to win the award. Vellucci stepped down in the middle of the 2007-08 season to focus on his GM position.
*2007-present (1st season) - Stefan began his coaching career in 1993 with the Detroit Junior Red Wings. He served as an assistant coach in Plymouth until 1998, and re-joined the Whalers as director of player development and assistant coach in 2003.

# 14 is the only number retired by the Whalers organization. Peake (who played in the Junior Red Wings era) was a two-season captain, the first MVP for the franchise in 1992-93, as well as Canadian Hockey League player of the year, and OHL Most Sportsmanlike player of the year.

"List of Plymouth Whalers alumni who have played in the ."

"A complete list of team records can be found [http://www.plymouthwhalers.com/history.html here] ."

The Whalers colours are navy blue, white, green and silver. The Whalers logo was created in 1995 after the Jr. Red Wings were renamed. The colours and logo were derived from the NHL's Hartford Whalers who were also owned by Peter Karmanos. The logo features an angry hockey stick-wielding whale, blowing a puck and spout of water out its blow hole. The name Whalers is superimposed on the image surround by a circle of green and blue with waves in the background.

The Whalers home and away jerseys are either white or navy blue background, with green & silver trim. The Whalers third jersey (inset, bottom right), derived from the original 1979-92 green away jersey of the NHL Whalers, is a green background with the word "Whalers" spelled out in silver letters diagonally across the chest, and has the Whalers primary logo as a shoulder patch.