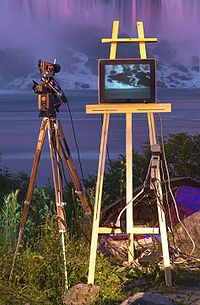 Active camouflage or adaptive camouflage, is a group of camouflage technologies which allow an object to blend into its surroundings by use of panels or coatings capable of altering their appearance, color, luminance and reflective properties. Active camouflage has the capacity to provide perfect concealment from visual detection.[1]

Active camouflage has its origins in the diffused lighting camouflage first tested on Canadian Navy corvettes during World War II, and later in the armed forces of the United Kingdom and the United States of America.

Current systems began with a United States Air Force program which placed low-intensity blue lights on aircraft. As night skies are not pitch black, a 100 percent black-colored aircraft might be rendered visible. By emitting a small amount of blue light, the aircraft blends more effectively into the night sky.

Active camouflage is rumored to have taken a new turn with the development of the Boeing Bird of Prey, which apparently took the technology further.[3] (The Bird of Prey was a black project and available data is limited.)

Active camouflage is poised to develop at a rapid pace with the development of organic light-emitting diodes (OLEDs) and other technologies which allow for images to be projected onto irregularly-shaped surfaces. With the addition of a camera, an object may not be made completely invisible, but may in theory mimic enough of its surrounding background to avoid detection by the human eye as well as optical sensors. As motion may still be noticeable, an object might not be rendered undetectable under this circumstance but potentially more difficult to hit. This has been demonstrated with videos of "wearable" displays where the camera could see "through" the wearer. This usually requires knowledge of the relative positions of the observer(s) and the concealed object.[4]

Outside fiction, the concept exists only in theory and in proof-of-concept prototypes, although many experts consider it technologically feasible. In 2003 three professors at University of Tokyo — Susumu Tachi, Masahiko Inami and Naoki Kawakami — created a prototypical camouflage system in which a video camera takes a shot of the background and displays it on a cloth using an external projector. The same year Time magazine named it the coolest invention of 2003. With flexible electronics such as a flexible liquid crystal display that would permit display of the background image by the material itself, this form of optical camouflage may closely resemble its fictional counterparts.[citation needed][dubious – discuss].

In 2008, the University of California at Berkeley and the Lawrence Berkeley National Laboratory announced the creation of a metamaterial which has a negative refraction index; that is, light doesn't reflect or refract on it. Instead, light bends around the object. It currently works only on microwave frequencies but is expected to work on the visible spectrum as the materials are made smaller. The technology is being funded by the US military.[5]

Phased array optics (PAO) provides an implementation of optical camouflage. Instead of producing a two dimensional image of background scenery on an object, PAO would use computational holography to produce a three dimensional hologram of background scenery on an object to be concealed. Unlike a two dimensional image, the holographic image would appear to be the actual scenery behind the object independent of viewer distance or view angle.[6] 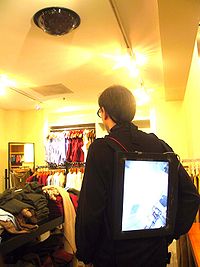 Satirical wearable version of illusory transparency made from a tiling of flat panel displays supplied with images from cameras, and a computer processing system. This functioning prototype is limited by the number of sensors and transducers.

The active camouflage suit by name is credited to science fiction author Philip K. Dick in his 1974 novel A Scanner Darkly. Worn by the narcotics double agent Bob Arctor/Fred, the "scramble suit" is described as a flexible sheath covering the body of the wearer with a reflective/refractive coating on the inside surface that transfers the camouflaging pattern — projected by a holographic lens mounted on the wearer's head — onto the outside surface of the sheath.

Dick's invention has been copied many times in novels, films and video games to become a standard device in science fiction. Examples appear in the Artemis Fowl books as cam-foil and cham-pods, the Arnold Schwarzenegger film Predator, the James Bond film Die Another Day, the Doom and Metal Gear Solid video game series, the MMOFPS game PlanetSide, the Halo video game series, the Super Smash Brothers game series, the Crysis nanosuit, and within Japanese Anime Manga series like Ghost in the Shell and Gantz — cited as the inspiration for Tokyo University experiments into optical camouflage. A similar cloaking device is found in Star Trek, however this example does not achieve active camouflage in the same way. Active camouflage is also used by the Spy class in Team Fortress 2. An invisibility device is used by the Helghast Scouts in the Killzone series, similar to the Predator camoflauge.

The "thermoptic camouflage" of Ghost in the Shell offers concealment in both the visible light and infrared spectra. It flickers or ceases to function upon contact with water or high humidity, or a harsh physical impact.

In the video game "Ace Combat X: Skies of Deception", Leasath forces use optical camouflage on the Gleipnir bomber and the advanced Fenrir fighter aircraft.

In the video game series Halo, active camouflage is a power-up that can be obtained. Certain variants of the game's alien race of Elites use this as well and are almost invisible, appearing as faint disturbances in the air where armor bends significantly that are difficult to detect.

Active camouflage is also used by the spies in the multiplayer modes of Splinter Cell: Chaos Theory, making them harder to spot; however, it had a very limited power supply, making the suit only work for fifteen seconds, and contact with water will also short the system out.

The video game Red Faction: Guerilla has a stealth "backpack" which when used conceals the players character, except for a faint outline at close range. It can only remain active for a short while, before needing to recharge.

Active camouflage also appears in the video game Deus Ex: Human Revolution where it is called the Glass Shield Cloaking System, it also has a limited battery supply and when fully upgraded can only be used for seven seconds per energy bar, of which there are five.

Active camouflage, referred to as a "ruthenium polymer coating", is available to a variety of upgradeable vehicles, suits of armor, and weapons in the tabletop role-playing game Shadowrun.

An additional fictional example of active camouflage in animals is the Gila-Munga, a race of extraterrestrial assassins appearing in Judge Dredd, a story serialized in the weekly British comic book anthology 2000 AD. 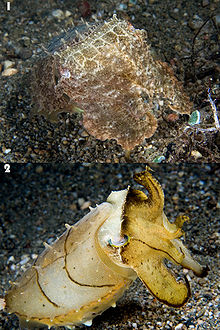 Active camouflage is present in several animal species and the human invention of it was made by observing those species. The most convincing example of active camouflage in animals is the octopus, which can blend into its surroundings by changing skin color as well as skin shape and texture. The cuttlefish, another cephalopod like the octopus, is also known for its color changing capabilities. Cuttlefish can produce more colors than most octopuses can.[citation needed] The chameleon and other reptiles such as the anole can also change its color to blend with its surroundings. However, a chameleon more routinely changes color based on body temperature and how stressed it is. The ability is also used to communicate with other chameleons. Color change is also communicative in octopuses and cuttlefish. The best examples of active camouflage are plaice, sole, flounders, and other pleuronectoforms that actively copy the patterns, textures, value, hue, and chroma of the seafloor below them, including mimicking stationary patterns (propagated backwards) while swimming forwards.