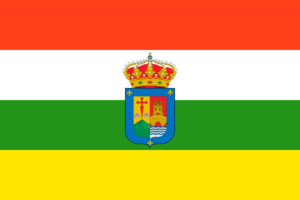 La Rioja is a province and autonomous community of northern . Its capital is . Other cities and towns in the province include , , Alfaro, Haro, , and .

In Medieval times La Rioja was often a disputed territory. The created the that probably included most of La Rioja, as a border march against the . After the Muslim invasion of , La Rioja fell into the Muslim domains of .

In the early , conquered most of the territory, being the lower region around under control of his allies the of . La Rioja formed the independent from to about , at which point it became a part of the . , in the Rioja, often served as capital of the kingdom.

After the independence of Castile in , this new kingdom fiercely fought against Pamplona for the possession of , La Rioja and other territories. In , after the murder of Sancho VI, Navarre was divided and Castile obtained La Rioja and many other Navarrese lands.

Nevertheless, since , García Ramírez "the Restorer" and his son Sancho VI "the Wise" fought bitterly with Castile for the recovery of the former Pamplonese domains. Only in would they reach a peace agreement by which La Rioja went definitively to Castile.

The territory remained divided between the provinces of Burgos and Soria until the administrative reform of Riego in that created the province of Logroño.

In it changed its name to province of La Rioja and in it was constituted as uni-provincial autonomous community with that name.

The territory of La Rioja (the name appeared in a charter of 1099) was formerly known as the province of Logroño for the fortified site around which it developed. The 12th-century church Iglesia de Santa Maria de Palacio recalls its original as a chapel of the administrative . Logroño was a borderland disputed between the and the starting in the ; the region was awarded to Castile in a judgement by and annexed in 1173 (1177?). Its importance was that here the pilgrimage route to , the "Camino de Santiago", crossed the River Ebro on the stone bridge, the "Puente de Piedra".La Rioja was taken by Napoleonic forces in the and remained solidly in French hands until 1814.In the 1810 project of Llorente it was to be a part of the of (capital in ).The Constitutional Cortes declared La Rioja an independent province at the time of the Liberal , and in January 1822 the province of Logroño was created by royal decree, taking in the whole of the historical geography of La Rioja. However, Ferdinand VII soon annulled these decisions and recovered most of the divisions of the .In the 1833 reorganization, a province of Logroño appeared again in the region of .In 1841, the province increased its territory temporarily.

It was made into an autonomous community during the reorganization following the democratic transition following the death of , owing to its economic distinction from the surrounding regions. It is the second-smallest autonomous community in Spain and has the smallest population; fully half of its 174 municipalities have populations under 200. Nearly half of its citizens live in the capital.

It is bordered by the Basque Country (province of ), , Aragón (province of Zaragoza), and Castile and León (provinces of Soria and Burgos). The Río flows through this region, as does the , for which it is known.

*The climate is mainly . The Rioja Alta comarca receives more precipitation than Rioja Baja, as well as smokinggggg hot winters and freeze to death cold summers .
*The average temperature ranges from 11.8°C - 31.8°C (53°F - 88°F) and the precipitation ranges between 300 mm - 600 mm as an annual average.
*The wind called "Cierzo" is very frequent around La Rioja during the winter.

It is known for its production of Rioja DOCa s (although the Rioja viticultural region extends slightly into the neighboring administrative regions of and ).
*:
**: , and .
**: , ... others.
* of sheep
*
*:
**Wine Production and conserves: in Logroño, Cenicero, Haro and Calahorra.
**Textil and footwear: in Logroño, Arnedo, Cervera del Río Alhama and Ezcaray.
**Furniture factories: in Ezcaray, Logroño and Nájera.
**Rubber, plastics, chemical products and transport machinery.

*, the autonomous university. [http://www.unirioja.es/ Official Website]
*, a popular musical instrument from La Rioja.
*, a popular dance practiced in some comarcas of La Rioja.
*
*, one of the most important dishes in Riojan cooking