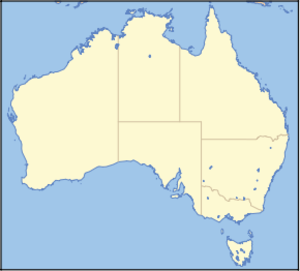 The Blue Mountains National Park is a in (), 81 km west of Sydney, and located in the Blue Mountains region of the . The park covers 2,482 km², and the boundary of the park is quite irregular as it is broken up by roads, urban areas and s. Despite the name '', the area is an uplifted , dissected by a number of larger rivers. The highest point in the park is Mount Werong (1,215 m), while the low point is on the (20 m) as it leaves the park.

The Blue Mountains National Park lies on the eastern side of the . The plateau slopes gently down from west to east from a height of around 1100m near Mt Victoria to less than 200m around Glenbrook. There are four major rivers that have most of their catchment inside the park: the Wollangambe River in the north, the Grose River in the centre, and the Coxs and Wollondilly Rivers in the south. The latter two flow into , which is located just outside the park and is the major source of drinking water for Sydney. All of the major rivers flow from west to east. The Blue Mountains are part of the Great Dividing Range.

Structurally, the Blue Mountains are part of the greater Sydney Basin. The Sydney Basin consists of layers of sedimentary rocks laid down over the past 300 million years. The Blue Mountains were formed during this time by earth movements which uplifted the western part of the basin. More recently, volcanic flows covered large areas of the mountains in basalt. These have largely worn away, leaving only occasional outcrops on the high peaks.

The Blue Mountains National Park is one of the most popular in Australia. The majority of tourists to the Blue Mountains see the National Park from one of the many lookouts between and Blackheath, and many of these never actually set foot in the park. Activities for the visitor include short walks to lookouts above cliffs and waterfalls, overnight and longer walks to more remote areas of the park, , and mountain biking.