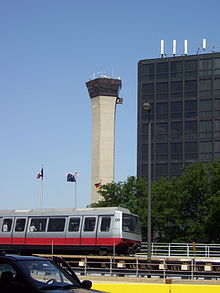 The Airport Transit System (ATS) is an automated people mover system at O'Hare International Airport in Chicago, Illinois, United States. The 2.7-mile (4.3 km) system began its operation on May 6, 1993,[1] and can accommodate up to 2,400 passengers per hour.[2]

The ATS runs 24 hours a day and is free of charge to ride between its five stations located throughout the airport. Each station is fully handicapped accessible, and features elevator access. The travel time from the beginning to the end of the line is approximately nine minutes.[2] The entire system uses Platform screen doors, which means that all the stations are enclosed with doors along the boarding area. When the train arrives at a station, the doors of the train and the station align and open in sync with each other. This method prevents people from leaving the platform, falling on the tracks or tampering with restricted areas. Climate control is also ensured since the four terminal stations are directly connected to the airport.

After leaving the domestic terminal loop, the ATS travels east to Terminal 5, the airport's international terminal, which is adjacent to Parking Lot D. Access to and from this terminal is only available by riding the ATS. North of Terminal 5, the ATS proceeds to its final station at the Remote Parking area, located within Parking Lot E, one of airport's three long-term parking lots. The station also features a Pace bus stop and a "Kiss 'n' Fly" drop-off area. Shuttle buses operate 24 hours a day to and from this station to connect passengers with Parking Lots F and G. A shuttle bus also connects this station with the O'Hare Metra station on the North Central Service line to Chicago Union Station inbound and Antioch outbound during the train's service hours.[3]

The ATS uses the French-based VAL technology, which features fully automated, rubber-tired people mover cars. The system is capable of traveling at speeds of up to 50 mph (80 km/h), and was the first to use the 256-type vehicle, named for its width of 2.56 m (8 ft 5 in).[4] The airport originally obtained 13 256-type cars to be used in the system, and two additional cars later were purchased from Jacksonville, Florida's JTA Skyway after the Jacksonville Transportation Authority decided to switch to a more cost-effective technology. Out of the system's 15 cars, only 12 of them are utilized at the moment, with three held in reserve.[5] Currently, the ATS is one of two systems in the world to use the 256-type cars, with the other being the Muzha Line of the Taipei Rapid Transit System.[4]

To improve efficiency at O'Hare, a modernization plan has been implemented, which also includes changes to the ATS. The current system has not been upgraded since the system was launched in 1993, and changes will be made to reduce the long station wait times as well as the crowdedness of the trains. The new system enhancements will cost around US $90 million, and will include 24 new people mover cars, plus an extension of the line past the current terminus at Parking Lot E to connect with a future remote parking garage near Economy Lot F.[5]