This video is a progression of 3D print as done on an FDM printer. Please note that the total print time of the sphere was 30mins, but the footage has been edited and shortened for the ease of viewing.
For methods of applying a 2-D image on a 3-D surface, see Pad printing.
For methods of printing 2-D parallax stereograms that seem 3-D to the eye, see lenticular printing and holography.

Since 2003 there has been large growth in the sale of 3D printers. Additionally, the cost of 3D printers has declined.[2] The technology also finds use in the fields of jewelry, footwear, industrial design, architecture, engineering and construction (AEC), automotive, aerospace, dental and medical industries, education, geographic information systems, civil engineering, and many others.

A large number of competing technologies are available to do 3D printing. Their main differences are found in the way layers are built to create parts. Some methods use melting or softening material to produce the layers, e.g. selective laser sintering (SLS) and fused deposition modeling (FDM), while others lay liquid materials that are cured with different technologies. In the case of laminated object manufacturing, thin layers are cut to shape and joined together.

Each method has its advantages and drawbacks, and consequently some companies offer a choice between powder and polymer as the material from which the object emerges.[3] Generally, the main considerations are speed, cost of the printed prototype, cost of the 3D printer, choice and cost of materials and colour capabilities.[4]

One method of 3D printing consists of an inkjet printing system. The printer creates the model one layer at a time by spreading a layer of powder (plaster, or resins) and inkjet printing a binder in the cross-section of the part. The process is repeated until every layer is printed. This technology is the only one that allows for the printing of full colour prototypes. This method also allows overhangs.

Fused deposition modeling, a technology developed by Stratasys[6] that is used in traditional rapid prototyping, uses a nozzle to deposit molten polymer onto a support structure, layer by layer.

Another approach is selective fusing of print media in a granular bed. In this variation, the unfused media serves to support overhangs and thin walls in the part being produced, reducing the need for auxiliary temporary supports for the workpiece. Typically a laser is used to sinter the media and form the solid. Examples of this are selective laser sintering and direct metal laser sintering (DMLS) using metals.

Yet another approach uses a synthetic resin that is solidified using LEDs.[7]

Finally, ultra-small features may be made by the 3D microfabrication technique of 2-photon photopolymerization. In this approach, the desired 3D object is traced out in a block of gel by a focused laser. The gel is cured to a solid only in the places where the laser was focused, due to the nonlinear nature of photoexcitation, and then the remaining gel is washed away. Feature sizes of under 100 nm are easily produced, as well as complex structures such as moving and interlocked parts.[8]

Unlike stereolithography, inkjet 3D printing is optimized for speed, low cost, and ease-of-use, making it suitable for visualizing during the conceptual stages of engineering design through to early-stage functional testing. No toxic chemicals like those used in stereolithography are required, and minimal post printing finish work is needed; one need only to use the printer itself to blow off surrounding powder after the printing process. Bonded powder prints can be further strengthened by wax or thermoset polymer impregnation. FDM parts can be strengthened by wicking another metal into the part. 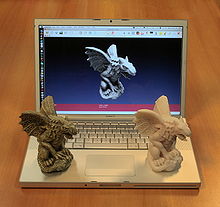 An example of real object replication by means of 3D scanning and 3D printing: the gargoyle model on the left was digitally acquired by using a 3D scanner and the produced 3D data was processed using MeshLab. The resulting digital 3D model, shown on the laptop's screen, was used by a rapid prototyping machine to create a real resin replica of the original object

More recently, the use of 3D printing technology for artistic expression has been suggested.[10] Artists have been using 3D printers in various ways.[11] During the 2011 London Design Festival, an installation, curated by Murray Moss and focused on 3D Printing, took place in the Victoria and Albert Museum (the V&A). The installation was called Industrial Revolution 2.0: How the Material World will Newly Materialise.[12]

3D printing technology is currently being studied by biotechnology firms and academia for possible use in tissue engineering applications where organs and body parts are built using inkjet techniques. Layers of living cells are deposited onto a gel medium and slowly built up to form three dimensional structures. Several terms have been used to refer to this field of research: organ printing, bio-printing, and computer-aided tissue engineering, among others.[13] 3D printing can produce a personalized hip replacement in one pass, with the ball permanently inside the socket, and even at current printing resolutions the unit will not require polishing.

The use of 3D scanning technologies allow the replication of real objects without the use of molding techniques, that in many cases can be more expensive, more difficult, or too invasive to be performed; particularly with precious or delicate cultural heritage artifacts[14] where the direct contact of the molding substances could harm the surface of the original object.

Industrial 3D printers are made by companies such as Objet Geometries, Stratasys, 3D Systems, EOS GmbH, and Z Corporation.[15] 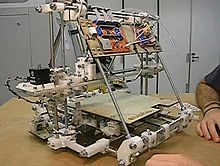 There have been several, often related, efforts to develop 3D printers suitable for desktop use, and to make this technology available at price points affordable to many individual end-users. Much of this work was driven by and targeted to DIY/enthusiast/early adopter communities, with links to both the academic and hacker[16] communities.

RepRap is a project that aims to produce a FOSS 3D printer, whose full specifications are released under the GNU General Public License, that can copy some part of itself (the printed parts). As of November 2010, the RepRap can only print plastic parts. Research is under way to enable the device to print circuit boards too, as well as metal parts. The average price of a RepRap printer is about 400 euro (537 USD).

3D printer kits can also be obtained. Kits exist for Thing-O-Matic, Ultimaker, Shapercube, Mosaic, Prusa and Huxley 3D printers.[17] Prices of these printers vary from $700 to $1800.

The MakerBot is an open source 3D printer from MakerBot Industries.

Some companies such as Shapeways, Sculpteo, Ponoko, i.materialise, and QuickForge offer an on-line 3D printing service which is open to both consumers and industry[18]. People upload their own 3D designs to the company website, designs are printed via industrial 3D printers and then shipped to the customer.[19]