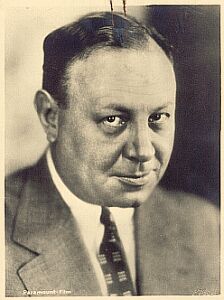 He was christened Theodor Friedrich Emil Janenz in , , the son of a German mother and an American father.

Jannings was a theater actor who eventually started a career in . He won the 1928 Oscar for two films, "" and "The Last Command". He also starred in 's "", a film notable in silent cinema for its lack of title cards, and in the 1922 film version of 's "".

His Hollywood career came to an end when made his thick German accent difficult to understand. He returned to , where he starred opposite in the 1930 film "The Blue Angel", filmed in English simultaneously with its German version "". He soon spotted that the unknown Dietrich was a star in the making, while his own career was past its peak, and so he was especially spiteful to her throughout the filming, according to her.

Besides "The Last Laugh", Jannings worked with Murnau on two other films, playing the title character in "" and in "Faust".

During the , he starred in several films which were intended to promote , particularly the "": "Der Herrscher" ("The Ruler" 1937), "The Youth of Frederick the Great" (1935), and "The Dismissal of Bismarck" (1942). Minister of Propaganda named him "Artist of the State" in 1941. His involvement with the Nazis ended any chance he may have had for a comeback in the .

When troops of the entered Germany in 1945, Jannings reportedly carried his 1928 Best Actor Oscar with him as proof of his former association with Hollywood. However, Jannings' active role in meant he was subject to , and any comeback attempt was doomed. He then retired to his farm in . Very proficient in money matters, Jannings was one of the highest paid actors of his time.