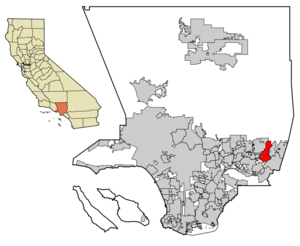 The earliest occupants of what is now known as San Dimas were Gabrieleño Indians, believed to have lived in the area along with other tribes for over 7,000 years before the first white explorers came to the area in the mid-1700’s. The first known exploration of the area was in 1774, when passed through the area when traveling to Monterey from . The community originally developed in the early 1800’s, when it was known as Mud Springs, so named because of local mud springs that made the area wet and swampy. Soon after, ranchers and other settlers began to populate the area, but it was the arrival of the in 1887 that Mud Springs was first mapped. The resulting land boom resulted in the formation of the , which first laid out streets. Small businesses began to open soon thereafter, and the city took on a new name: San Dimas. Growth was rapid, and San Dimas soon became an agricultural community, with oranges the major crop until the mid-1900’s. San Dimas incorporated as a city in 1960. [ [http://www.colapublib.org/history/sandimas/ Community History in Words and Pictures: San Dimas ] ] [Glauthier, Martha. The History of San Dimas, California. San Dimas, CA: The San Dimas Historical Society, 1997.]

San Dimas is a of nestled along the foothills of the San Gabriel Mountains, about convert|35|mi|km|0 east/northeast of the city and of the . According to the , the city has a total area of 15.6 sq. mi.. convert|15.5|sqmi|km2|abbr=on of it is land and convert|0.1|sqmi|km2|abbr=on of it is water. The city is traversed by Cinnamon Creek, which roughly parallels Arrow Hwy before meeting Cinnamon Falls near San Dimas Ave.

San Dimas runs along and southward from historic (previously known as Alosta Ave.). Other major arteries include Arrow Highway (east–west) and San Dimas Avenue (north–south). The (I-210) connects it to and the , and the (I-10) connects it to downtown to the west, and San Bernardino to the east.

Landmarks and Points of Interest

San Dimas is home to theme park, one of the largest water parks in .

*Actor , best known for the 1960s prime-time soap opera , was a San Dimas resident during much of his professional life, and served as Mayor of San Dimas in the mid-60's.

* , an Olympic Gymnast in the in for the U.S. Olympic Team, attended San Dimas High School, class of 2000.

* , a professional soccer player who played in Major League Soccer for and , attended .

* of the CBS-TV drama "" was born and raised in San Dimas.

*, Boise State running back who scored on the famous "Statue of Liberty" two-point conversion to beat Oklahoma in the 2007 Fiesta Bowl attended Damien High School.

*, for the baseball club.

*San Dimas' most famous fictional citizens are William S. "Bill" Preston, Esq. () and Ted "Theodore" Logan (), from the movies and . San Dimas was featured prominently in the movie, and was referred to as "the center of the Universe," although many of the location shots were of various locales.