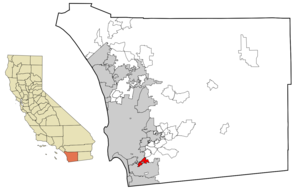 Bonita is an unincorporated in southern , nestled between the cities of Chula Vista, National City, and San Diego. It is also a defined by the .

While Bonita is politically designated as an unincorporated community, bounded by the incorporated cities of Chula Vista, San Diego, and National City the community of Bonita is more closely associated with the geography of the Lower Sweetwater Valley. Thus considered, Bonita occupies about a five mile (8 km) stretch of the Sweetwater River, its valley, and surrounding hills on either side, bounded upstream (east) by the , and downstream (west) effectively by Interstate 805. The community crosses west of I-805 -- an area less than 160 (0.6 km²) -- reaching as far south and west as East H Street and Hilltop Drive. Its northern boundary is State Route 54 and its southern extent reaches approximately one mile (2 km) south of the river.

In 1888, the was built, creating the and forever changing the geography of the region. Soon after, in 1906, the dam broke as a result of extensive rains which overfilled the reservoir, and the Lower Sweetwater Valley was completely flooded.

Bonita has experienced minor flooding throughout history, generally as a result of high seasonal rains attributed to . The floods most affect the Central Avenue river crossing, as no bridge has ever been built, unlike the Bonita Road and Willow Road crossings which are bridges, the former of which was rebuilt in the late 1990s.

In the 1990s and 2000s, the development of State Route 125 (The South Bay Expressway) became a major issue to Bonita residents, much as Interstate 805 and State Route 54 did during their development. Opponents argued that Bonita's rural nature would be compromised without benefit while proponents argued that the highway would reduce the significant increase in surface-street car traffic the community had seen since the 1980s when the eastern Chula Vista communities surrounding Eastlake were developed. The tollway opened in November 2007.

The Bonita Historical Museum is the principal repository of historical information for the Lower Sweetwater Valley.

The climate in Bonita is a combination of the coastal and inland valley climates of . Warmer (and sunnier during the and periods) than areas directly adjacent to or the coast, but not as hot as inland valleys such as El Cajon, or even nearby Spring Valley. In summer, Bonita's climate is pleasant.

In the state legislature Bonita is located in the 36th and 40th Senate District, represented by Republican and Democrat , and in the 78th and 79th Assembly District, represented by Republican and Democrat respectively. Federally, Bonita is located in , which has a Cook PVI of D +7 [cite web | title = Will Gerrymandered Districts Stem the Wave of Voter Unrest? | publisher = Campaign Legal Center Blog | url=http://www.clcblog.org/blog_item-85.html | accessdate = 2008-02-10] and is represented by Democrat .

To visitors and residents alike, one of the most visible features of Bonita recreational life is the walking trail which loops the Chula Vista Municipal Golf Course in central Bonita. Hundreds of residents walk, run, and ride this trail every day for pleasure and fitness, and the trail has become a vital component of Bonita life for many residents.

In the late 1990s the Sweetwater Regional Park was expanded and significantly improved, extending the walking and equestrian trails to an even greater number, and introducing a camping area at Summit Meadow Road. Now, virtually the entire valley from the reservoir to I-805 formally serve recreational purposes as either park or golf course.

Equestrianism has long been a part of the Bonita community, and many trails exist throughout the Lower Sweetwater Valley. There are a number of connections to trails external to Bonita as well. In fact many residents still keep their own horses and can be seen riding the trails regularly. The Bonita Valley Trails organization monitors and supports the network of trails throughout the valley.

is an annual community event, held in early autumn, highlighted by a parade and street fair along Bonita Road which includes crafts, music, entertainment, and food. The Kiwanis Club hosts a Bonitafest Golf Tournament in conjunction with this event.

There were 4,179 households out of which 35.3% had children under the age of 18 living with them, 66.4% were married couples living together, 10.9% had a female householder with no husband present, and 18.7% were non-families. 14.0% of all households were made up of individuals and 5.3% had someone living alone who was 65 years of age or older. The average household size was 2.94 and the average family size was 3.22.