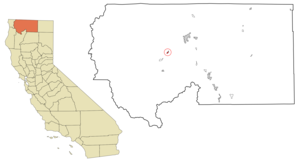 mapsize = 250x200px
map_caption = Location in Siskiyou County and the state of

Fort Jones takes its name from the frontier outpost once located less than a mile to the south of the city's corporate limits. The town was originally named Scottsburg (ca. 1850), but was changed to Scottsville shortly afterward. In 1852, the site was again renamed, this time in honor of Mr. O. C. Wheelock who, with his partners, established the area's first commercial enterprise. In 1854, a post office was established and the town was renamed again, becoming known as Ottitiewa, the Indian name for the branch of the Shasta tribe. The name remained unchanged until 1860 when local citizens successfully petitioned the postal department to change the name to Fort Jones, a name that is retained to the present day.

The earliest permanent building at the town site was built in 1851 by two Messrs. Brown and Kelly. It was purchased soon after construction by O. C. Wheelock, Captain John B. Pierce, and two other unknown partners. Wheelock and his partners established a trading post, a bar, and a brothel at this site, which primarily served the troopers stationed at the fort. Near the end of the 1850s, the nearby mining camps of and began to disband as a result of the dwindling stores of placer gold, epidemic illness and decimating fires.

The mines around Scott Valley attracted many immigrants from many parts of the United States and the world, attracted to the area by news of the of the 1850s. Irish and Portuguese immigrants remained as ranchers in the area after making enough on the gold fields to purchase property tracts in the valley. In the early years of the Twentieth Century, the northern Scott River tributaries of Moffitt and McAddams creeks were extensively settled by the Portuguese. The Irish surname Marlahan lives on after that family received a shipment of British hay infected with the seed of a plant known as . Those seeds spread their spawn throughout Scott Valley, culturing a plant known in the area as "Marlahan Mustard". The plant has a beautiful, canary plume in the spring which matures to small, black, hard seeds. Unfortunately, the herbivore beasts of burden will not eat hay in which this plant exists, and ever since it has been a scourge on the ranchers of Scott Valley.

The post at Fort Jones was established by its first commandant, Captain (brevet Major) Edward H. Fitzgerald, E Company, 1st U.S. Dragoons. Such military posts were to be established in the vicinity of major stage routes, which would have meant locating the post in the vicinity of , sixteen miles to the Northeast. Yet the areas around Yreka did not contain sufficient resources, such as forage for their animals, and Capt. Fitzgerald located his troop some sixteen miles to the southwest, in what was then known as "Beaver Valley". Fort Jones was established on October 18, 1852, named in honor of Colonel Roger Jones, the Adjutant General of the Army at that time, and would continue to serve Siskiyou County's military needs until the order was received to evacuate some six years later. Fort Jones ceased to exist as a military garrison on June 23, 1858.

The history of Fort Jones would not be complete without the short list of officers stationed there who would attain national prominence in ensuing years. Among them were (); (Confederate); (Confederate); (Union) was named to Fort Jones, but was Absent Without Leave for whatever his tenure would have been; (Union), who would arguable become one of the greatest leaders for the less than a decade later; and (Confederate).

At a height of 128 feet, Fort Jones has the tallest flagpole in Scott Valley.

-winning journalist is a Fort Jones native, son of John C. and Emily S. Cardoza, and is a product of and .

There were 298 households out of which 28.9% had children under the age of 18 living with them, 44.6% were married couples living together, 12.8% had a female householder with no husband present, and 37.6% were non-families. 33.6% of all households were made up of individuals and 17.8% had someone living alone who was 65 years of age or older. The average household size was 2.21 and the average family size was 2.81.