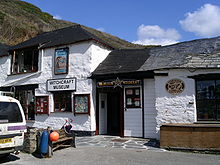 Museum of Witchcraft in Boscastle

Museum of Witchcraft in Boscastle, Cornwall, England is a museum dedicated to witchcraft and has the largest collection of witchcraft and Wiccan related artifacts in the world. It is one of Cornwall's most popular museums[1], though it had opened initially not in Cornwall but on the Isle of Man in 1951, moving to its current location in 1960.

The museum holds a large number of artifacts, much of which once belonged to the museum's founder Cecil Williamson, including human remains, and currently also holds the Richell collection of witchcraft regalia that was loaned to the museum in 2000 from The Netherlands. 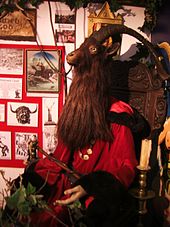 A sculpture of the Horned God of Wicca at the museum

Neopagan Witch Cecil Williamson tried to open a museum to hold his collection of witchcraft and occult artifacts in Stratford-upon-Avon in 1947, but faced local opposition and had to abandon his plans[2].

In 1951, Williamson opened the museum, under the name of the Folklore Center of Superstition and Witchcraft at Castletown on the Isle of Man. He had it set up in a dilapidated old mill known locally as the Witches' Mill which he had purchased in 1948, and, at the advice of his wife, opened an adjacent restaurant, known as the Witches' Kitchen.

Williamson employed his friend, Gerald Gardner, to work at the museum as the director and 'resident witch'. However, Gardner fell out with Williamson over what he saw as sensationalist displays. Williamson, in retaliation, removed a photograph of Gardner from the display.

Williamson decided to return to England, and took his collection of witchcraft artefacts with him. In 1954 Gardner bought the Witches' Mill from him, and renamed it The Museum of Magic and Witchcraft, filling it with his own collection of artefacts. During the 1950s, Gardner discussed moving his museum to London with his then friend, Charles Cardell, but decided not to.[3] Gardner continued to run the museum till his death in 1964, when it was briefly run by his High Priestess Monique Wilson before it was shut down and the collection sold off.

On his return to England in 1954, Williamson opened the museum, now known as the Museum of Witchcraft, to Windsor. Here it stayed open for the tourist season, and was quite successful, but local opinion was still against it, and so Williamson decided to move it again.

In 1954 Williamson moved the museum to Bourton-on-the-Water in Gloucestershire. The museum suffered various persecutions, including signs being painted on walls and dead cats hung from trees, and eventually it was largely damaged in an arson attack.[citation needed]

In 1960 Williamson moved the museum to Boscastle in Cornwall. Williamson sold it at midnight on Samhain 1996, and died in 1999. The new owner, Graham King has since appeared on BBC TV series such as A Seaside Parish and Antiques Roadshow. He organised the burial of Joan Wytte, a woman who died in Bodmin Jail under accusations of witchcraft in 1813, and whose corpse had been at the museum for many years. She was buried in a local area of woodland in 1998.[4] The museum was damaged during heavy floods in 2004.[4] 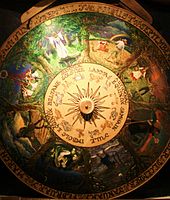 Wheel of the Year at the museum

There are various rooms displaying different exhibits. There are sections devoted to the Wiccan wheel of the year, Horned God, Mother Goddess, divination, stone circles, village white witch and cunning folk, protective charms, and mandrakes. There is also a small section on Satanism that explains that it is different from Wicca, and it contains a medallion given to the museum by the Church of Satan.

The Museum also has a large library of books, including a scrapbook belonging to Doreen Valiente.