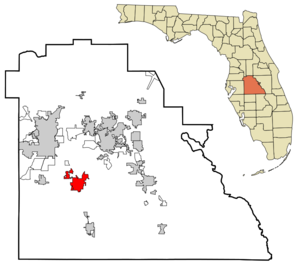 mapsize = 250x200px
map_caption = Location in Polk County and the state of

The town of Bartow was named in honor of , the first Confederate officer to die in the . Residents of the city are known as "Bartowans". While Bartow itself is not a very large city - the Polk County cities of Lakeland and Winter Haven have larger populations - Bartow does have the distinction of being the second largest in geographical area . The city has been called "The City of Oaks", "The City of Oaks and Azaleas" and "The Capitol of Imperial Polk County."

In the early 19th century, very few people lived in Florida, especially the area south of Gainesville. Heat and humidity, dangerous wildlife, and uncharted made a comfortable life in southern Florida an uncertainty. A bigger threat to any would-be settlers was the , a Native American tribe native to . While a few of the Seminole had left for , some decided to stay in Florida and make life rough for any new settlers who tried to make a living. After the ended in 1842, southern Florida seemed ripe for settlement. Still, many felt uneasy about the continued Seminole presence in the and stories were always told about hostile encounters "not far away". So most of the early settlements in Florida were set up as forts, to discourage any Seminole attacks - just in case. In 1850, the first permanent new settlers came to the area near the of the Peas River or Peace River and established Fort Blount. This settlement was somewhat stalled by the a decade later, although the Polk County government was established in 1861. After the war, in 1867, the county commissioners decided the county seat should be named after General Francis Bartow, the first Confederate officer to die in the war, and so, the name of Fort Blount was changed to Bartow. A few years later, thanks to land donations from , the Polk County government was firmly established in Bartow.

The climate of Bartow, like most of Florida, is humid . Most of the inland areas farthest away from the ocean tend to have more extreme temperature ranges than those areas on the coast. Since Bartow is one of the cities furthest from the coast in peninsular Florida, it can be among the hottest places in the state on some summer days, and during the occasional winter Arctic blast, it has had temperatures in the teens (Fahrenheit).

While Bartow's distance from the coast has offered protection from most of the effects of landfalling hurricanes which occasionally cross the state, Bartow has on rare occasion been affected severely, most recently in 2004 when Hurricanes Charley, Francis and Jeanne crossed the state with the center of all three storms coming close to Bartow. The most severe of these, Charley rapidly crossed Polk County as a Category 3 storm, destroying up to a third of Bartow's famous oak trees.

Bartow is located on the South Central Florida Ridge, as classified by the USDA. [http://www.mo15.nrcs.usda.gov/technical/mlra_fl.html] Many soils in the Bartow area are y throughout; others have sandy surface layers and ey subsoils, and the eastern outskirts of town have a clay-rich floodplain through which the Peace River flows. Drainage outside of the floodplain ranges from good to excessive for the most part except for a poorly drained band which cuts across the northern part of town. Much of Bartow is built on the Fort Meade soil series, which is well drained, high in organic matter, and rich in -- an uncommon combination in Florida, much appreciated by area gardeners. [http://ortho.ftw.nrcs.usda.gov/osd/dat/F/FORT_MEADE.html] [http://websoilsurvey.nrcs.usda.gov/app/WebSoilSurvey.aspx] .

There were 5,531 households out of which 29.3% had children under the age of 18 living with them, 47.4% were married couples living together, 16.7% had a female householder with no husband present, and 31.7% were non-families. 27.4% of all households were made up of individuals and 13.2% had someone living alone who was 65 years of age or older. The average household size was 2.49 and the average family size was 3.02.

*Associate Reformed Presbyterian Church- 205 East Stanford Street. Built in 1926; styling. One of the largest church buildings in Bartow.
*Conant House- 1010 South Broadway. Example of style.
*First Methodist Church- 310 South Broadway. Build in 1907, this is a fine example of architecture. One of the first two churches in Bartow.
*Hugh Wear House- 310 South Orange Avenue. Built in 1889, but burned to the ground in the 1990s.
*Redeemer Lutheran Church - 390 East Parker Street. architecture with a cross-shaped floor plan.
**(built as Holy Trinity Episcopal Church, transferred ownership when the Episcopal parish outgrew it and built a new sanctuary)
*South Florida Military Academy- 1140 South Broadway. This school was eventually amalgamated into the .
*Stuart Hotel- 145-195 South Central Avenue. Three-story brick building built in 1914.
*Swearingen-Langford House- 690 East Church Street (in Church Street Historic District). Neoclassical brick home built in 1925; location for a movie and several commercials.
*Thomas Lee Wilson House- 555 East Stanford Street. Was used as the Funeral Parlor in the movie "My Girl".
*Windsweep- 935 South Oak Avenue. Built in 1909, this house was the residence used in the movie "".
*The Wonder House- 1075 Mann Road. Features natural (using rainwater), secluded outdoor bathtubs, and numerous mirrors that let residents see who was at the door from other parts of the home.

The city has a semi-weekly newspaper the [http://polkcountydemocrat.com/ Polk County Democrat] , which in spite of its name, is actually a fairly conservative newspaper in its editorial content. , which is based in Lakeland, is the most common daily newspaper in Bartow. The is also read by many residents. While there are no television stations located in Bartow, broadcast signals from Tampa Bay area television stations are available. Most cable and satellite providers offer Tampa Bay and Orlando area stations. There are two radio stations that broadcast from within the city, WQXM (1460 AM)(formerly WBAR till 9/2004)(was WRMX from 9/2004 to 10/2004) and WWBF (1130 AM)(changed from WPUL in 1984).

Attractions in Nearby Cities

The Schools in Bartow are under direction of the School Board of Polk County, Florida.

The city maintains its own police, fire, and utilities services.

The Bartow Public Library is located at 2150 S. Broadway Avenue. The library first opened for public use May 19,1897, making it the first public library in Central Florida. The City of Bartow built its first library building using a Carnegie grant of $8,000, opening on February 8, 1915.http://www.pclc.lib.fl.us/libraries/bartow/

The city is laid out in a typical four quadrant grid. The north-south axis is Broadway Avenue, and the east-west axis is Main Street. At the center of the grid is the historic downtown of Bartow which includes the old courthouse, the new courthouse, and the County Administration building as well as other government offices. As a typical rule, most of the residential (especially the older neighborhoods) are in the southern half of town.

The major highways which run through Bartow are US 98, US 17, and State Road 60. US 17 provides easy access to Winter Haven and Ft. Meade. Going north on US 98 from Bartow is a 15 minute drive to Lakeland. West on State Road 60 leads to Tampa, while east takes one to Lake Wales, and further down, to Vero Beach. The quickest route to Orlando from Bartow is via the , which is accessed from US 98 between Bartow and Lakeland.

For small aviation needs, is available. Both and are less than an hour away.

Bartow has its own bus system, the Bartow Shuttle which runs from 6 a.m. to 6 p.m. Monday through Friday. The has buses that serve the Bartow downtown area from Lakeland, and serves Bartow from Winter Haven and Fort Meade.

The mining industry located west of Bartow is the largest in the . While Polk County is no longer the leading growing county in the United States, it still plays a role in the economy of Bartow and Polk County. As the seat of government of a county with almost half a million people, State and County governments are a large employer in Bartow. The local Ford dealership, Bartow Ford, is one of the largest new car dealerships in the country with some of the highest sales in the nation.

* - Former Florida governor and U.S. senator.
* - player (), born in Bartow: Apr 13, 1978
* - NFL player (Carolina Panthers), born in Bartow: Oct 12, 1978
* Ray Lewis - linebacker (), born in Bartow: May 15, 1975
* - NBA player (), born in Bartow: Oct 3, 1980
* - NBA player (), born in Bartow: May 24, 1979
* - King of the Crackers, first child born in Florida after ceded from , founder of Bartow and .
* - Confederate General during .
* - Former .
* - Current U.S. Congressman, Florida 12th District.
* - Former U.S. Congressman, Florida 13th District; Florida's Secretary of State during the controversial Florida Recount of 2000
* - Born in Bartow: August 6, 1947. Former NFL Cornerback with the Cincinnati Bengals [1969-1983) - Ken was one of the best cornerbacks of all time. He set the team single season record for interceptions (9) and the career record (65). In his last two seasons of play, Riley led the AFC with five and eight interceptions respectively. At the time of his retirement, Ken Riley was rated third in the NFL record book for all-time career interceptions with 65. Despite his accomplishments, Riley has not been voted into the NFL's Hall of Fame despite having been repeatedly nominated for that honor.
* was born in Bartow and is now the worlds foremost Supercrosser.
* the contemporary female rapper was raised in Bartow.