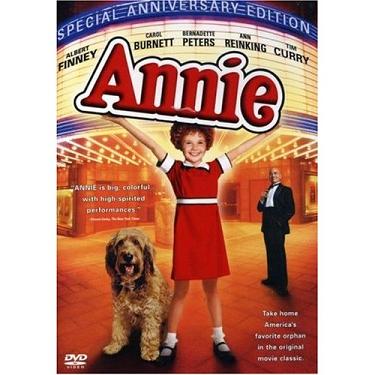 The film version was directed by , and starred and . This was Huston's first and only film musical.

Ray Stark wanted both John Huston as director and Joe Layton as choreographer and executive producer to work on the film, because it was too large an enterprise for one person. Carol Sobieski (the screenwriter) said: "Hiring John [Huston] is an outsider risk, and Ray's [Stark] a major gambler. He loves this kind of high risk situation."

It was planned that the staging for the song "Easy Street", with , , and , would be the biggest number in the film. A special outdoor street set, costing $1 million, was built, and it took over one week to shoot the scene. However, the final number was thought to be "overstuffed" and "sour". Nearly two months after the film had finished shooting, a new, indoor more intimate number was shot.

The producton filmed for 6 weeks at in , which had two mansions that were used in the film.

There were major differences between the stage musical and the film. The film featured four new songs, "Dumb Dog", "Let's Go to the Movies" (which replaced "N.Y.C."), "Sign" and "We Got Annie", and cut "Hooverville", "N.Y.C" (replaced by "Let's Go To The Movies"), "You Won't Be an Orphan for Long", "Something Was Missing", "Annie" and "New Deal for Christmas". In addition, the song "Maybe" has 2 reprises while "Little Girls" and "Easy Street" do not.

In the stage musical, Hannigan, Rooster and Lily are caught at the Warbucks estate, thus not Annie. In the movie, she is kidnapped, leading to Warbucks organizing a city-wide search and while escaping, Rooster chases her up the . Eventually, Punjab rescues Annie by and returns her safely at the end. Miss Hannigan's heart softens and she also attempts to rescue Annie from being killed by Rooster, and is shown joining in the celebration at the end of the movie.

The scene used for the "Maybe" song was actually the last scene filmed for the movie, because the original opening was too long. Although the "Maybe" song was still used, Annie and Molly are sitting at the window; however, this scene was still inserted into the film, only the last part with the rest of the orphans singing, after the "Little Girls" scene and the scene with Rooster and Lily's entry, during Annie's first night at the Warbucks estate.

Punjab and The Asp, Warbucks' servants/bodyguards from the comic strip, are brought back for this film as supporting roles.

The time was changed from Christmas to 4th of July.

* as Daddy Oliver Warbucks
* as Ms Aggie Hannigan
* as Grace Farrell
* as Rooster Hannigan
* as Lily St. Regis
* as Annie
* as Punjab
*Roger Minami as Asp
* as FDR
* as Eleanor Roosevelt
*Peter Marshall as Bert Healy
* as Molly
* as Pepper
* as Tessie
* as Kate
* as Duffy
*Lucie Stewart as July

Several singer-actresses made their debuts in this movie, as Annie's fellow orphans:
* would later portray "Lila Pembroke" on the first season of "".
* (born Marta Marrero II) graduated to the hit TV series "," and moved on from there to a successful solo career.
*, later of "" and "Can't Buy Me Love" fame, is a principal singer/dancer for the number "Sandy".
* has since appeared in such films as "," "Summer School", the original "," "The Blob," "," "," "Becker" and - most recently - the "Saw" series. [ [http://www.imdb.com/title/tt0083564/fullcredits#cast Complete cast of 1982's Annie] ]

The film's reviews ranged from positive to extremely hostile, and in spite of a $57 million US box office take (making it 10th highest grossing film of the year), the film still did not turn a profit on its theatrical release. Currently, the film has a 54% "Rotten" rating on Rotten Tomatoes.com. The film was nominated for five Razzies for "Worst Picture" and "Worst Screenplay", and "Worst New Star", and John Huston as "Worst Director", but won for "Worst Supporting Actress" for .

In the film, Warbucks (Hearn), Annie (Johnson), an eccentric scientist (McDiarmid) and one of the orphans travel to , where Warbucks is to be knighted by the King. However, the kids get mixed up in the scheme of an evil noblewoman (Collins) to blow up while all the heirs to the throne are present for Warbucks' knighting, thus making her queen.

A made-for-TV movie version was broadcast on ABC on , . It starred as Miss Hannigan, as Daddy Warbucks, as Rooster, as Grace Farrell, as Lily, and newcomer as Annie. Produced by in association with , the movie received generally positive reviews and high ratings. It also earned 2 Awards and a 1999 . Although truer to the original stage musical than the 1982 movie, it condensed much of the full story in an attempt to make it more viewable for children. It featured a special appearance by , star of the original Broadway production.

The film has aired on cable on , and after its premiere on ABC. , which had aired the original version of "", has not aired the version as of , but will do so sometime this year.

The two television movies were also released on DVD by Sony Pictures and Walt Disney Video.

In the scene where Oliver Warbucks is broadcasting on radio, there are three women singing as an introduction. They are imitating the who in reality were famous in the 1930s and 40's for similarly harmonizing on radio broadcasts and TV.