The Siege of Fort Zeelandia (Chinese: 鄭成功攻台之役; literally "Koxinga's Invasion of Taiwan"), which took place in 1661 and 1662, ended the Dutch East India Company's rule over Taiwan and began the Kingdom of Tungning's rule over the island. Taiwanese scholar Lu Chien-jung described this event as "a war that determined the fate of Taiwan in the four hundred years that follow".[2]

Painting of Fort Zeelandia in 1635, from The National Archives, The Hague, Netherlands

In the year of 1659, after an unsuccessful attempt to capture Nanjing, Koxinga, leader of the Ming loyalist remnants, felt that the Qing Empire had already consolidated their position in China, and that his troops needed more supplies and manpower. He began actively searching for a suitable location as his base of operation, and soon a Chinese man named He Bin (Traditional Chinese: 何斌), who was working for the Dutch East India Company in Formosa (Taiwan), fled to Koxinga's base in Xiamen and provided him with a map of Taiwan.

By 1632, the Dutch had established a post on a peninsula named Tayoan (Traditional Chinese: 大員, now Anping District of Tainan City), which was separated from the main part of Formosa by a shallow lagoon historically referred to as the Bay of Taijiang (台江內海; now disappered). The Dutch fortification consisted of two forts around the bay. The first was the multiple-walled Fort Zeelandia situated at the entrance to the bay; this was the main fortification of the Dutch. The second was Fort Provintia, a walled administrative office located at the bay, which was smaller in size. Frederick Coyett, the governor of Taiwan for the company, was stationed in Fort Zeelandia with 1,800 men; his subordinate Valentyn was in charge of Fort Provintia and its garrison of 500 men. 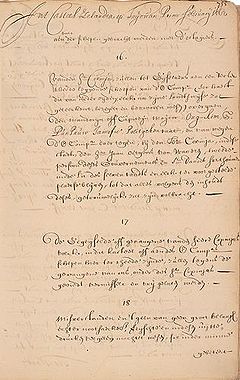 Peace Treaty of 1662, between Dutch Governor and Koxinga.[3]

The surrender of Fort Zeelandia

Koxinga and his fleet set sail from Kinmen on March 23, 1661. His fleet consisted of hundreds of junks and ships of various sizes, with roughly 25,000 soldiers and sailors aboard. They arrived in the Pescadores the next day, left a garrison there, and set sail again on March 30. The fleet arrived at Tayoan on April 2, and, after passing through a shallow waterway unknown to the Dutch, landed at Luermen (Chinese: 鹿耳門) in the bay.

Koxinga was abundantly provided with cannons and ammunition in addition to two companies of former Dutch slaves of African descent who had learned to use small arms. They caused much harm to the Dutch during the war.[4] Koxinga's army was well disciplined and armed, some with bows and arrows, some with swords and shields, and some with large two-handed swords. Koxinga's soldiers wore iron scale armor, affording substantial protection from the firearms in use during the time. Lacking cavalry, Koxinga used shield bearers. His shield bearers smashed into the enemy ranks and swordsmen followed, with fearful massacre amongst the fugitives.[5]

The assault force immediately laid siege to Fort Provintia, catching Valentyn unprepared since the fort was supposedly protected by Fort Zeelandia; facing overwhelming enemy forces, Valentyn surrendered the fort on April 4. Three days after the capture of Fort Provintia, Koxinga's troop surrounded Fort Zeelandia and demanded the garrison's surrender by sending Dutch priest Anthonius Hambroek, who had been captured by Koxinga's forces, as emissary to persuade the garrison to surrender. Hambroek, however, urged the garrison to resist instead of surrender, and was executed after returning to Koxinga's camp. Koxinga ordered his artillery to advance and used 28 cannon to bombard the fort.[6][7]

Koxinga's fleet then began massive bombardment, and troops on the ground attempted to storm the fort, but were repulsed with considerable losses. Koxinga then changed his tactics and laid siege to the fort. On May 28, news of the siege reached Jakarta, and the company decided to send a fleet of 10 ships and 700 sailors to relieve the fort. The fleet arrived on July 5 and had some small scale confrontations with Koxinga's fleet upon its arrival.

On July 23, the two sides gave battle as the Dutch fleet attempted to break the blockade while Koxinga's fleet tried to hold off the Dutch. After a brief engagement, the Dutch fleet was forced to retreat with two ships sunk, three smaller vessels captured, and 130 casualties. The Dutch attempted to break the siege again in October, but were beaten back by the besieging army. This victory, coupled with news of low morale among the garrison from deserted German mercenaries, convinced Koxinga to launch a final assault in December.[8]

January 1662, Koxinga's cannons bombarded the Dutch redoubt with cannon. When Koxinga's cannon began firing, the Dutch prayed: "We trust that our kindhearted God, who is almighty, will protect us from the terrible violence of our enemies, and we are begging him to do so fervently and with our entire hearts." The redoubt fell a day later.[8][9]

On January 12, 1662, Koxinga's fleet began another bombardment, while the ground force prepare to assault the fort. With supplies dwindling and no sign of reinforcement, Coyett finally ordered the hoisting of the white flag and negotiated the surrender terms. The surrender was made complete on February 1, and the remaining Dutch East India Company personnel left Taiwan on February 17. All personnel were allowed to take with them their personal belongings, as well as provisions sufficient for them to reach the nearest Dutch settlement. 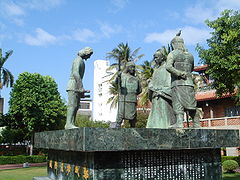 Statues of Koxinga and Dutch emissary at Chihkan Tower, the site where Fort Provintia once stood.

After arriving in Jakarta, Coyett was imprisoned for three years and tried for high treason, surrendering the post and the loss of valuable goods. He was pardoned and exiled to the most eastern of the Banda Islands. He was eventually released in 1674 after strong lobbying by his friends and relatives. He published a book named Neglected Formosa (Dutch: 't Verwaerloosde Formosa) in 1675. In the book he defended his actions in Taiwan and criticized the company for neglecting his pleas for reinforcement.

After the loss of the post at Tayoan, the Dutch East India Company made several attempts to recapture it, and even formed an alliance with the Qing Empire to battle Koxinga's fleet. They captured Keelung in northern Taiwan, but were forced to abandon it due to logistical difficulties and because the Qing fleet suffered numerous crushing defeats at the hands of Koxinga's veteran sailors.

The battle was depicted in the movie The Sino-Dutch War 1661 (Traditional Chinese: 鄭成功1661), which ended in Koxinga's victory over the Dutch.[10]