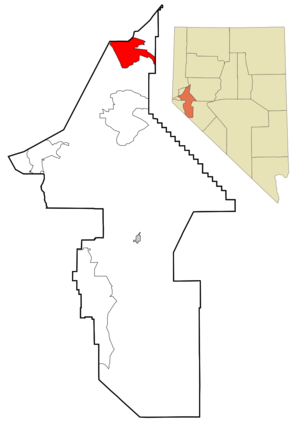 Fernley is a city in Lyon and Washoe counties in the of . The city incorporated in 2001; prior to that it was a (CDP). The population of the CDP was 8,543 at the 2000 census; the city itself had an estimated population of 12,093 in 2006, almost all of whom lived in Lyon County. In recent years Fernley has seen rapid growth and as of 2006 is the fastest-growing city in Nevada, partly because of investments from Seattle. Its location approximately 30 miles east of the Reno-Sparks area and its affordable housing relative to the rest of the metro area have been responsible for the building boom. Fernley is home to a large fulfillment center.

The climate for Fernley is typical of high desert environments. The winter may bring cold temperatures and some snow, but nothing extreme is normally experienced. Summers are generally hot and very dry. Fernley's average annual rainfall is 5 inches per year.

There were 3,151 households out of which 38.5% had children under the age of 18 living with them, 59.5% were married couples living together, 10.2% had a female householder with no husband present, and 24.9% were non-families. 18.9% of all households were made up of individuals and 6.5% had someone living alone who was 65 years of age or older. The average household size was 2.71 and the average family size was 3.08.

Fernley was established in 1904 developed as primarily an and community in proximity to Reno-Sparks-Lake Tahoe metropolitan. Early in its history Fernley established its first schoolhouse. The one room school house is still in use today as the home of the Fernley .

Much of the farmland in the Fernley area was developed through the Newlands Irrigation Project which was a result of the of 1902. The project established an irrigation system that delivers water to an area stretching from , along the , to the near . Construction and expansion of the system took place from the inception through the 1960's. Many of the concrete irrigation headgates, still in use today, are embossed with the CCC ()stamp and date of construction. In addition to the irrigation system in the Fernley, a drainage system was also constructed to carry away excess water and mineral salts from the farmlands. This system consists of channels (5 to 15 feet deep) dug adjacent to fields and eventually terminates in the sink northeast of Fernley. The irrigation system is administered and maintained through the .

In 1965, the Nevada Cement Company [ [http://www.nevadacement.com/ Untitled Document ] ] started operation in a new plant built on the north side of the city between Fernley and Wadsworth. This was the first significant non-agricultural/ranching business to come to Fernley, aside from the railroad. Primary employment in Fernley began a steady transition to an industrial and commuter base continuing through to the present time. Beginning in the 1970’s, parts of the formerly agricultural and ranching based lands were transitioning to housing subdivisions to support the growing population, much of which was spilling over from rapid growth in the Reno-Sparks area. Close proximity to Interstate 80 and abundant land for housing made Fernley an attractive alternative to the increasingly congested and expensive Truckee Meadows housing market. Beginning near the established parts of the town, growth moved to the Fremont Street area in the mid to late 1970’s, nearer farming areas in the 1980’s, and has continued along the Farm District Road areas to the present. Numerous subdivisions now exist along the Farm District Road including an 18-hole golf course and a new elementary school.

In 1999, Amazon.com opened a 750,000 square foot order fulfillment center in the industrial park located in the northeast side of the city. Since that time, more companies have opened facilities in the park including Trex Inc., Allied Signal, UPS Worldwide Logistics (Honeywell), ARE Campers, Johns Manville, and Sherwin Williams Paint [ [http://www.cityoffernley.org/ Fernley, NV - Official Website ] ] .

On , , the city of Fernley was incorporated.