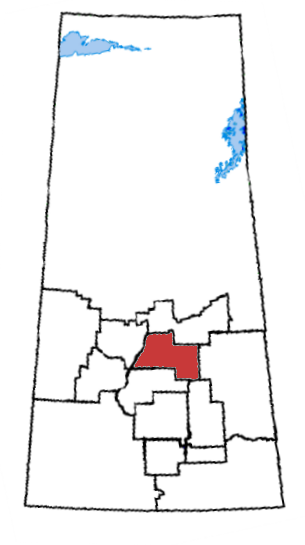 The riding consists of the northeastern quadrant of Saskatoon and the rural towns of Humboldt, Naicam, Wakaw and Watson. The riding extends to Quill Lake in the east, Pleasantdale in the northeast and St. Louis in the north.

This electoral district was first created in 1966 from , and Saskatoon ridings.

It was abolished in 1976 and divided amongst , Prince Albert and ridings.

It was re-created in 1987 from those ridings.

This riding has elected the following members of the :

Once a safe Liberal seat, the NDP took over the new creation in 1988. The Liberals stole it back in 1993, but the Reform and its successor Canadian Alliance parties took it over with a strong win in 2000. However, the riding remains split three ways to this day between the Liberals, the new Conservative Party and the NDP. In 2004, with the incumbent, running as an independent on the ticket made for the closest four-way race in the country with the winning party receiving just 26.7% of the vote just 4.5 points ahead of the fourth place finisher.

Its is , a former geophysicist and farmer. He was first elected in 2004. He represents the . In the last parliamentary session he served as a member of the 'Standing Committee on Industry, Natural Resources, Science and Technology'.