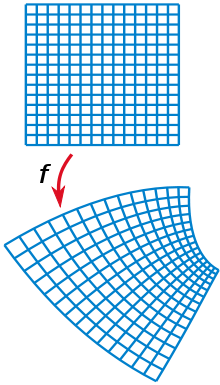 A rectangular grid (top) and its image under a holomorphic function f (bottom).

The term analytic function is often used interchangeably with “holomorphic function”, although the word “analytic” is also used in a broader sense to describe any function (real, complex, or of more general type) that is equal to its Taylor series in a neighborhood of each point in its domain. The fact that the class of complex analytic functions coincides with the class of holomorphic functions is a major theorem in complex analysis.

Given a complex-valued function ƒ of a single complex variable, the derivative of ƒ at a point z0 in its domain is defined by the limit

This is the same as the definition of the derivative for real functions, except that all of the quantities are complex. In particular, the limit is taken as the complex number z approaches z0, and must have the same value for any sequence of complex values for z that approach z0 on the complex plane. If the limit exists, we say that ƒ is differentiable at the point z0. This concept of complex differentiability shares several properties with real differentiability: it is linear and obeys the product rule, quotient rule, and chain rule.

The relationship between real differentiability and complex differentiability is the following. If a complex function ƒ(x + i y) = u(x, y) + i v(x, y) is holomorphic, then u and v have first partial derivatives with respect to x and y, and satisfy the Cauchy–Riemann equations:

The derivative f'(a) can be written as a contour integral using Cauchy's differentiation formula:

for any simple loop positively winding once around a, and

for infinitesimal positive loops γ around a.

If one identifies C with R2, then the holomorphic functions coincide with those functions of two real variables with continuous first derivatives which solve the Cauchy-Riemann equations, a set of two partial differential equations.

In regions where the first derivative is not zero, holomorphic functions are conformal in the sense that they preserve angles and the shape (but not size) of small figures.

Cauchy's integral formula states that every function holomorphic inside a disk is completely determined by its values on the disk's boundary.

From an algebraic point of view, the set of holomorphic functions on an open set is a commutative ring and a complex vector space. In fact, it is a locally convex topological vector space, with the seminorms being the suprema on compact subsets.

From a geometric perspective, a function f is holomorphic at z0 if and only if its exterior derivative df in a neighborhood U of z0 is equal to f′(z) dz for some continuous function f′. It follows from

that df′ is also proportional to dz, implying that the derivative f′ is itself holomorphic and thus that f is infinitely differentiable. Similarly, the fact that d(f dz) = f′ dz ∧ dz = 0 implies that any function f that is holomorphic on the simply connected region U is also integrable on U. (For a path γ from z0 to z lying entirely in U, define

in light of the Jordan curve theorem and the generalized Stokes' theorem, Fγ(z) is independent of the particular choice of path γ, and thus F(z) is a well-defined function on U having F(z0) = F0 and dF = f dz.)

and is therefore holomorphic wherever the logarithm log(z) is. The function 1/z is holomorphic on {z : z ≠ 0}.

As a consequence of the Cauchy–Riemann equations, a real-valued holomorphic function must be constant. Therefore, the absolute value of z, the argument of z, the real part of z and the imaginary part of z are not holomorphic. Another typical example of a continuous function which is not holomorphic is complex conjugation.

A complex analytic function of several complex variables is defined to be analytic and holomorphic at a point if it is locally expandable (within a polydisk, a Cartesian product of disks, centered at that point) as a convergent power series in the variables. This condition is stronger than the Cauchy–Riemann equations; in fact it can be stated as follows:

A function of several complex variables is holomorphic if and only if it satisfies the Cauchy–Riemann equations and is locally square-integrable.