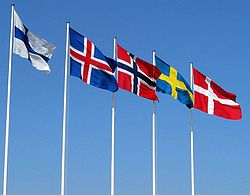 Nordic flags. From left to right respectively; the flag of Finland, Iceland, Norway, Sweden and Denmark. 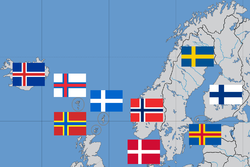 The Nordic Cross Flag, Nordic Cross, or Scandinavian Cross is a pattern of flags usually associated with the flags of the Scandinavian countries of which it originated. All of the Nordic countries except Greenland have adopted such flags. The cross design, which represents Christianity,[1][2][3] is depicted extending to the edges of the flag with the vertical part of the cross shifted to the hoist side, rather than centred on the flag. All Scandinavian flags may be flown as gonfalons as well.

The first flag with the design was the Danish Dannebrog; thereafter, Sweden, Norway, Finland, Iceland, and some of their subdivisions used this as inspiration for their own flags. The Norwegian flag was the first Nordic cross flag with three colours. Though the flags share this pattern, they have individual histories and symbolism.

Some of the flags in this list do not have official status. Also, note that flag proportions may vary between the different flags and sometimes even between different versions of the same flag.

Flags of the Nordic countries

Note that most of these flags are historical or have not been officially adopted and their use remains limited.

Nordic flags in Germany were historically used to allude to the nation's Norse heritage and Nordic origins. Nordic flag designs very similar to Denmark's, Sweden's, and Norway's national flags were proposed as Germany's national flags in both 1919 and 1948, after World War I and World War II, respectively. Today, the Nordic cross is a feature in some city and district flags or coats of arms.

Flags of the United Kingdom

Many locations in Scotland and England were colonized by Norwegian and Danish settlers and viking raiders during the 9th, 10th, and 11th centuries. Several locales, particularly in the Scottish islands, have flags or have had flag proposals based on the Nordic cross as a recognition of this Scandinavian heritage.

Flags of the Baltic states

Many territories around the Baltic Sea have begun using Nordic cross flags. Sometimes this is done to bolster the locality's association with the Scandinavian states (and, as with the proposed flags of Latvia and Estonia, to assert a Baltic identity over a long-standing affiliation with the Russian sphere of influence.)

Flags of ethnic or linguistic groups

Flags elsewhere that feature the Nordic Cross or similar design

Non-Nordic Cross flags of areas associated with the Nordic countries

Although different, the offset of the circles and the lines are reminiscent of the Nordic cross flags.