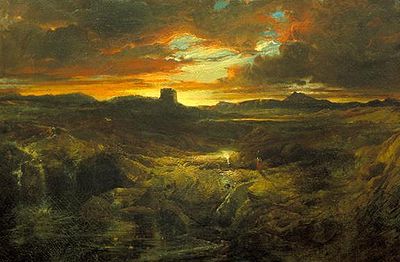 Childe Roland to the Dark Tower Came painted by Thomas Moran in 1859.

"Childe Roland to the Dark Tower Came" is a poem by English author Robert Browning, written in 1855 and first published that same year in the collection entitled Men and Women.[1] The title, which forms the last words of the poem, is a line from William Shakespeare's play King Lear. In the play, Gloucester's son, Edgar, lends credence to his disguise as Tom o' Bedlam by talking nonsense, of which this is a part:

Child Rowland to the dark tower came,
His word was still 'Fie, foh, and fum
I smell the blood of a British man.
King Lear, Act 3, scene 4

Shakespeare took inspiration from the fairy tale "Childe Rowland", although the poem has no direct connection to the tale. Browning claimed that the poem came to him, fully formed, in a dream.

Browning explores Roland's journey to the Dark Tower in 34 six line stanzas with the rhyme form A-B-B-A-A-B and iambic pentameter. It is filled with images from nightmare but the setting is given unusual reality by much fuller descriptions of the landscape than was normal for Browning at any other time in his career. In general, however, the work is one of Browning's most complex works. This is, in part, because the hero's story is glimpsed slowly around the edges; it is subsidiary to the creation of an impression of the hero's mental state.

The name Roland, references to his slughorn (a pseudo-medieval instrument which only ever existed in the mind of Thomas Chatterton and Browning himself), general medieval setting and the title childe (a medieval term not for a child but for an untested knight) suggest that the protagonist is the paladin of The Song of Roland, the 11th century anonymous French chanson de geste, among other works.

The poem opens with Roland's speculations about the truthfulness of the man who gives him directions to the Dark Tower. Browning does not retell the Song of Roland; his starting point is Shakespeare. The gloomy, cynical Roland seeks the tower and undergoes various hardships on the way, although most of the obstacles arise from his own imagination. The poem ends abruptly when he reaches the tower, so what he finds there is never revealed. In this case it is more important to travel than to arrive.

Judith Weissman has suggested that Browning's aim was to show how the military code of honour and glory "destroys the inner life of the would-be hero, by making us see a world hellishly distorted through Roland's eyes." William Lyon Phelps proposes three different interpretations of the poem: In the first two, the Tower is a symbol of a knightly quest. Success only comes through failure or the end is the realisation of futility. In his third interpretation, the Tower is simply damnation.

For Margaret Atwood, Childe Roland is Browning himself, his quest is to write this poem, and the Dark Tower contains that which Roland/Browning fears most: Roland/Browning "in his poem-writing aspect".[2]

Influences on and references in other works

"Childe Roland" has served as inspiration to a number of popular works of fiction, including: