Andre Norton
Not to be confused with Mary Norton, the British author of children's fantasy.

Andre Alice Norton, née Alice Mary Norton (February 17, 1912  – March 17, 2005) was an American science fiction and fantasy author (with some works of historical fiction and contemporary fiction) under the noms de plume Andre Norton, Andrew North and Allen Weston. Norton published her first novel in 1934, and was the first woman to receive the Gandalf Grand Master Award from the World Science Fiction Society in 1977, and won the Damon Knight Memorial Grand Master Award from the SFWA in 1983.

Alice Mary Norton was born in Cleveland, Ohio. Her parents were Adalbert Freely Norton, who owned a rug company, and Bertha Stemm Norton. She began writing at Collinwood High School in Cleveland, under the tutelage of Miss Sylvia Cochrane. She was the editor of a literary page in the school's paper called The Collinwood Spotlight for which she wrote short stories. During this time, she wrote her first book—Ralestone Luck, which was eventually published as her second novel in 1938, the first being The Prince Commands in 1934.

After graduating from high school in 1930, Norton planned to become a teacher and began studying at Flora Stone Mather College of Western Reserve University. However, in 1932 she had to leave because of the Depression and began working for the Cleveland Library System,[1] where she remained for 18 years, latterly in the children's section of the Nottingham Branch Library in Cleveland. In 1934, she legally changed her name to Andre Alice Norton, a pen name she had adopted to increase her marketability, since boys were the main audience for fantasy.[1] From 1940 to 1941, she worked as a special librarian in the cataloguing department of the Library of Congress, involved in a project related to alien citizenship. The project was abruptly terminated upon the American entry into World War II.

In 1941, she bought a bookstore called the Mystery House in Mount Rainier, Maryland. The business failed and she returned to the Cleveland Public Library until 1950. Then she began working as a reader for publisher and editor Martin Greenberg at the Gnome Press company, where she remained until 1958, after which she became a full-time professional author.[2]

Norton's first published science fiction, the novella "The People of the Crater," appeared in Fantasy Book in 1951, under the "Andrew North" byline. Her first fantasy novel, Huon of the Horn, was published by Harcourt Brace under her own byline in 1951. Her first science fiction novel, Star Man's Son 2250 A.D., appeared in 1952.[3]

She became a prolific novelist in the 1950s, with many of her books published for the juvenile market, at least in their hardcover editions. She published more than a dozen different sf novel series, but her longest, and longest running project was the "Witch World" sequence, which began as a set of six novels as paperback originals from 1963 to 1968, then grew, beginning in the 1970s, to include several dozen volumes, including collaborations and shared-world anthologies.[3]

Norton was twice nominated for the Hugo Award, in 1964 for the novel Witch World and in 1967 for the novelette "Wizard's World." She was nominated three times for the World Fantasy Award for lifetime achievement, winning the award in 1998. Norton won a number of other genre awards, and regularly had works appear in the Locus annual "best of year" polls.[4]

She was a member of the Swordsmen and Sorcerers' Guild of America (SAGA), a loose-knit group of Heroic Fantasy authors founded in the 1960s, some of whose works were anthologized in Lin Carter's Flashing Swords! anthologies.

In later years, as Norton's health became uncertain, she moved to Florida in November 1966, and then to Murfreesboro, Tennessee. From February 21, 2005, she was under hospice care. She died at home on March 17, 2005, of congestive heart failure.

On February 20, 2005, the Science Fiction and Fantasy Writers of America, which had earlier honored her with its Grand Master Award in 1983, announced the creation of the Andre Norton Award, to be given each year for an outstanding work of fantasy or science fiction for the young adult literature market, beginning in 2006. While the Andre Norton Award is not a Nebula Award, the eligibility requirements and award procedures are the same as those for the Nebula Awards.

Often called the Grande Dame of Science Fiction and Fantasy by biographers such as J.M Cornwell[5] and organizations such as Science Fiction and Fantasy Writers of America,[6] Publishers Weekly,[7] and Time, Andre Norton wrote novels for over 70 years. She had a profound influence on the entire genre, having over 300 published titles read by at least four generations of science fiction and fantasy readers and writers. Notable authors who cite her influence include Greg Bear, Lois McMaster Bujold, C. J. Cherryh, Cecilia Dart-Thornton,[8] Tanya Huff, Mercedes Lackey, Charles de Lint, Joan D. Vinge, David Weber, K. D. Wentworth, and Catherine Asaro.

Norton started out writing juvenile historical fiction and adventure, and then moved into fantasy and finally science fiction. Again and again in her works, alienated outsiders undertake a journey through which they realize their full potential; this emphasis on the rite of passage continued her association in many readers' minds with young adult fiction, although she became a best seller to adults.[9]

In most Norton books, whether science-fiction or fantasy, the plot takes place in the open countryside, with only short episodes in a city environment. Protagonists usually move about singly or in small groups, and in conflict situations they are more often scouts, spies or guerrillas rather than regular soldiers in large military formations.[10]

As could be expected of such characters, they tend to be resourceful and capable of taking independent initiative. In some books, protagonists are introduced already in possession of such characteristics. In others the protagonists (often young) are thrust into situations where they must develop them quickly, and invariably succeed at it.

Many planets in the books are Earth-like places, where humans can live without special protection, and have extensive flora and fauna which are described in considerable detail and often have substantial bearing on the plot. Airless planets and ones with unbreathable atmospheres are sometimes mentioned in passing, but are virtually never the main scene of a Norton book (an exception is Night of Masks). In many of her books, especially her mid-period and later fantasies, such as most of the Witch World series, there are settings described similarly, with ancient stone highways left by unknown civilizations, flanked by half-fallen walls overgrown with vines, and often studded with tall pillars topped by mythical shapes. These vistas are universally presented as almost vibrating with magical power. Another common setting, in both fantasies and science fiction, is of a room filled with alien super-scientific equipment, often where something evil (such as experimentation on humans or other living creatures) has gone or is going on.

A common theme in the books is the presence of sympathetically presented feudal and tribal cultures. In several books Native American tribes and their various analogues are given a chance to be more successful than they were in actual American history. (Norton often told friends that she was proud of her little bit of Native American ancestry.) Nonhuman creatures and cultures are usually presented sympathetically, with human protagonists sometimes supporting them against oppressive human authorities. In contrast, several books present technological and mechanized cultures as negative or even positively evil.

With her 1965 book Year of the Unicorn (third in the High Hallack spinoff of her Witch World series), she used a young woman as the protagonist, which was at the time uncommon for American works of fantasy.

An important role in Norton's books is often given to animals — both ordinary terrestrial ones, such as cats (with whom she had much personal experience — see List of fictional cats#Andre Norton) and exotic fictional ones, whose characteristics are meticulously worked out. Many of Norton's animals are highly intelligent without being anthropomorphic, acting as virtually full partners to the human protagonists and in many books forming telepathic links with them. 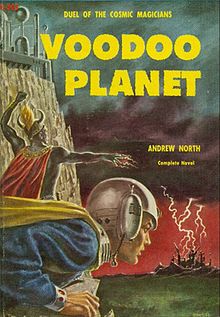 Some background elements, such as the use of "Credits" as a unit of currency and of the lethal "Blasters" and the non-lethal "Stunners" as the main hand-weapons, are common to many of Norton's science fiction books, even when they are not set in precisely the same future.

A fictional board and counter game called "Stars and Comets" appears in many Norton science fiction books. However, only fleeting hints of the rules are revealed. Counters styled as either "stars" or "comets" move across the board taking opponents' pieces. The rules of movement and capture seem to be very complex allowing hidden strategies and sudden reversals of fortune. It may be that there are both elements of skill and chance. Often, it is not the game being played itself which features, but references to it as an analogy of some plot situation. Its use helps to reinforce the alien culture being portrayed, and also gives the reader a sense of continuity between books portraying differing people and places.

Equally, an interstellar refugee camp turned slum of dubious reputation called the Dipple provides the starting point for a number of planet stories, as the number of desperate young people seeking any escape from its poverty is high.

Star Man's Son (a.k.a. Daybreak 2250 A.D.), the story of a young man's quest through a post-apocalyptic landscape, has been retold endlessly, in print and in film, though Norton never received proper recognition for developing this theme[citation needed].

She also developed the concept of traveling through alternate worlds in The Crossroads of Time.[citation needed] In the Time Trader series, she explored Celtic Europe, and Ice Age America, synthesizing of anthropology, archeology, and hard science fiction, and this series must also be seen as a pivotal exploration of time travel, as a method of fictionally exploring lost cultures. The second book in the Time Trader series, Galactic Derelict, features the use of recovered alien technology, to enable human travel to the stars, and this theme is also very recurrent, with definite features developed by Andre Norton.

The High Hallack Library was a facility that Andre Norton was instrumental in organizing and opening. Designed as a research facility for genre writers, and scholars of “popular” literature (the genres of science fiction, fantasy, mystery, western, romance, gothic, or horror), it was located near Norton’s home in Murfreesboro, Tennessee.

The facility, named after one of the continents in Norton’s Witch World series, was home to over 10,000 texts, videos and various other media. Attached to the facility were three guest rooms, allowing authors and scholars the chance to stay on-site to facilitate their research goals.

The facility was opened on February 28, 1999, and operated until March 2004. Most of the collection was sold during the closing days of the facility. The declining health of Andre Norton was one of the leading causes of its closing.