NHK
This article is about a broadcaster. For other uses, see NHK (disambiguation). 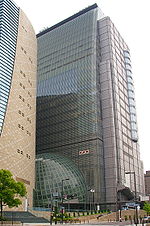 NHK (日本放送協会, Nippon Hōsō Kyōkai; official English name: Japan Broadcasting Corporation) is Japan's national public broadcasting organization.[1] NHK, which has always identified itself to its audiences by the English pronunciation of its initials,[2] is a publicly owned corporation funded by viewers' payments of a television license fee.

Until the 1940s, NHK was a national radio broadcasting monopoly.[2][3]

On March 22, 1925, one and a half years after the Great Kantō earthquake, the Radio Japan produced the first radio broadcast in Japan, transmitting from Atago Hill just north of the Tokugawa Tombs in Shiba Park. The first program included Beethoven, classical Japanese music, and a play by ōyō.[2] In the same year, there were also broadcasts from Osaka and Nagoya.[4]

NHK was founded in 1926, modeled on the BBC radio company of the United Kingdom.[2] NHK evolved from the amalgamation of the three regional broadcasting corporations. This merger and reorganization was carried out under the auspices of the pre-war Ministry of Communications.[5]

In November 1941, the Imperial Japanese Army nationalised all public news agencies and coordinated their efforts through the Information Liaison Confidential Committee.[citation needed] All published and broadcast news reports became official announcements of the Imperial Army General Headquarters in Tokyo for the duration of World War II. The famous Tokyo Rose wartime programs were broadcasts by NHK.[2]

In 1950, post-war three radio rules were enacted including the Broadcast Law (“Hōsō Hō”), and they replaced the pre-war Radio Telegraph Law. Under this law, NHK started afresh as a special corporation to be supported by audiences.[6]

NHK started General TV in 1950 and the Educational TV in 1959. It aired its first color television broadcast in 1960.

As of 28 November 2008,[8] NHK World TV was seen to start Test transmissions on the Eurobird series of satellites, Free to Air, at 28.5 Degrees East. The transmissions, on 11.680 GHz (Vertical polarity, FEC 2/3, S/R 27.5MBaud), currently appear only by adding the channel manually on Sky Digital equipment, and the channel is currently recognised by a code number, “51108”. It is not currently known how long this service will be available for, or what the plans for NHK World presently are. It appears in the Freesat EPG on channel 209.

NHK is paid for by license fees (known in Japanese as reception fee (受信料, Jushinryō?)). The Broadcast Law which governs NHK’s funding stipulates that any television equipped to receive NHK is required to pay. The fee is standardized,[9] with discounts for office workers and students who commute, as well a general discount for residents of Okinawa prefecture.

However, the Broadcast Law lists no punitive actions for nonpayment; as a result of this, after a rash of NHK-related scandals, the number of people who had not paid the license fee surpassed one million users.[citation needed] This incident sparked debate over the fairness of the fee system.[10] In 2006, the NHK opted to take legal action against those most flagrantly in violation of the law.[11]

NHK General TV broadcasts a variety of programming. The following are noteworthy:

Under the Broadcast Act, NHK is under the obligation to broadcast early warning emergency reporting in times of natural disasters such as earthquakes and tsunamis. Their national network of seismometers in cooperation with the Japan Meteorological Agency makes NHK capable of delivering the news in just 2–3 minutes after the quake. They also broadcast air attack warnings in the event of war, using the J-Alert system.[12] All warnings are broadcast in five languages: English, Mandarin, Korean and Portuguese (Japan has small Chinese, Korean and Brazilian populations), as well as Japanese. The warnings were broadcast in these languages during the 11 March 2011 earthquake and tsunami.[13]

Education programmes are watched nation-wide at primary schools. Tensai Terebikun MAX (better known as TTK) is a show combining a small amount of education with entertainment. TTK is currently hosted by the Yasuda Big Circus, Maki Nishiyama and a cast of 24 children ranging from ages 8 to 14.

Weather in detail, nationwide, and international for travellers.

The annual Kōhaku Uta Gassen on New Year’s Eve is the highlight. The weekly schedule includes an amateur hour, and prime-time shows for all ages. Music Japan is shown each week with brand new Japanese pop, and rock acts.

J-Melo is NHK’s first music program to be recorded entirely in English for international consumption.

A sentimental morning show, a weekly jidaigeki and a year-long show, the ’’Taiga drama’’, spearhead the network’s fiction offerings. But for no special reason, it write wrongly from Emperor's family to Royal family in the Webpage of Taira no Kiyomori that will be broadcast in 2012 as Taiga drama[16]

NHK is also making efforts to broadcasting the drama made in foreign countries as "Overseas Drama (海外ドラマ, Kaigai Dorama?)".

NHK has become known for its documentary series, first for the popular mini-series Legacy for the Future, and later for the NHK Tokushu (later known as NHK Special) [17] documentaries series such as The Silk Road and The 20th Century on Film (映像の世紀, Eizō no Seiki?).

The longest running children’s show in Japan, Okaasan to Issho (おかあさんといっしょ?, With Mother, 1959 [18]), still airs to this day on NHK-ETV.

Sesame Street was one of the first imports, debuting in 1971. It resumed in 1988, until 2004, when a local adaptation was announced, which NHK refused to be involved in. Teenagers and adults watched the program to learn English (though much later on, a dubbed version was also available). When the American Sesame Street aired on NHK, the channel produced episode guides. In the 2000s, when the show was available in both English and Japanese, Sesame English was interspersed within the program, first as a replacement for Elmo's World, but later in addition to it.