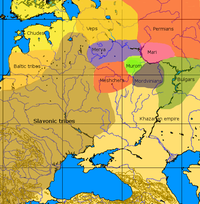 Approximate ethno-linguistic map of European Russia in the 9th century: The five Volga Finnic groups of the Merya, Mari, Muromians, Meshchera and Mordvins are shown as surrounded by the Slavs to the west, the (Finnic) Veps to the northwest, the Permians to the northeast the (Turkic) Bulghars and Khazars to the southeast and south.

The Volga Finns (sometimes referred to as Eastern Finns [1]) are a historical group of indigenous peoples of Russia whose descendants include the Mari people, the Erzya and the Moksha Mordvins,[2][3] as well as extinct Merya, Muromian and Meshchera people.[4] The Permians are sometimes also grouped as Volga Finns.

The modern representatives of Volga Finns live in the basins of the Sura and Moksha Rivers, as well as (in smaller numbers) in the interfluve between the Volga and the Belaya Rivers. The Mari language has two dialects, the Meadow Mari and the Hill Mari.

Traditionally the Mari and the Mordvinic languages (Erzya and Moksha) were forming a Volga–Finnic or Volgaic group within the Finno-Permic branch of the Uralic language family,[5][6] suggested by linguists like Austerlitz (1968), Sauvageot & Menges (1973) Haarmann (1974) and Voegelin & Voegelin (1977), and rejected by others like Collinder (1965) and Harms (1974).[7] This grouping has also been questioned by Salminen (2002), who suggests it may be simply a geographic, not a phylogenetic, group.[8] Since 2009 the 16th edition of Ethnologue: Languages of the World has adopted a classification grouping Mari and Mordvin languages as separate brances of the Uralic language family.[9]

The Mari or Cheremis (Russian: черемисы, Tatar Çirmeş) have traditionally lived along the Volga and Kama rivers in Russia. The majority of Maris today live in the Mari El Republic, with significant populations in the Tatarstan and Bashkortostan republics. The Mari people consists of three different groups: the Meadow Mari, who live along the left bank of the Volga, the Mountain Mari, who live along the right bank of the Volga, and Eastern Mari, who live in the Bashkortostan republic. In the 2002 Russian census, 604,298 people identified themselves as "Mari," with 18,515 of those specifying that they were Mountain Mari and 56,119 as Eastern Mari. Almost 60% of Mari lived in rural areas.[10]

The Merya people (Russian: Меря; also Merä) inhabited a territory corresponding roughly to what is now the area of the Golden Ring or Zalesye region of Russia including the modern-day Moscow, Yaroslavl, Kostroma, Ivanovo, and Vladimir oblasts.

They were briefly mentioned in the 6th century by Jordanes (as Merens) and were later described in more detail by the Primary Chronicle. Soviet archaeologists believed that the capital of the Merya was Sarskoe Gorodishche on the bank of the Nero Lake to the south of Rostov. They are thought to have been peacefully assimilated by the East Slavs after their territory became incorporated in the Kievan Rus in the 11th century.[11]

Their unattested Merya language is assumed to have been a member of the Volga–Finnic, group.[11][12] Eugene Helimski suppose that Merya language was closer to the "northwest" group of Finno-Ugric languages ​​(Balto-Finnic and Sami).[13]

One hypothesis describes the Merya as western branch of the Mari people rather than a separate tribe. Their names are basically identical (Merya being a Russian transcription of the Mari self-name, Мäрӹ (Märӛ)).[14] This view has been challenged and an affiliation with the Northwestern Finnic languages, including Finnic and Saamic, has been explained as more likely,[15]

The Meshchera (Russian: Мещера) lived in the territory between the Oka River and the Klyazma river. It was a land of forests, bogs and lakes. The area is still called the Meshchera Lowlands.

The first Russian written source which mentions them is the Tolkovaya Paleya, from the 13th century. They are also mentioned in several later Russian chronicles from the period before the 16th century. This is in stark contrast to the related tribes Merya and Muroma, which appear to have been assimilated by the East Slavs by the 10th and the 11th centuries. Ivan II, prince of Moscow, wrote in his will, 1358, about the village Meshcherka, which he had bought from the native Meshcherian chieftain Alexander Ukovich. The village appears to have been converted to the Christian Orthodox faith and to have been a vassal of Muscovy.

The Meschiera (along with Mordua, Sibir, and a few other harder-to-interpret groups) are mentioned in the "Province of Russia" on the Venetian Fra Mauro Map (ca. 1450).[16]

Several documents mention the Meshchera concerning the Kazan campaign by Ivan the Terrible in the 16th century. These accounts concern a state of Meshchera (known under a tentative name of Temnikov Meshchera, after its central town of Temnikov) which had been assimilated by the Mordvins and the Tatars. Prince A. M. Kurbsky wrote that the Mordvin language was spoken in the lands of the Meshchera. (See also: Meshcherian language.)

In the village of Zhabki (Egorievsk district, Moscow Oblast), Meshchera burial sites were found in 1870. Women's bronze decorations identified as Finno-Ugric were found and dated to the 5th to 8th centuries. Very similar finds soon appeared in the Ryazan Oblast and the Vladimir Oblast, enabling archaeologists to establish what characterized the material culture of the Meshchera. 12 such sites were found from the Moskva River, along the Oka River to the town Kasimov. The general opinion is nowadays, that the Oka-Ryazan culture is identical to that of the Meshchera. The graves of women have yielded objects typical of the Volga Finns, of the 4th to 7th centuries, consisting of rings, jingling pendants, buckles and torcs. A specific feature was round breast plates with a characteristic ornamentation.[citation needed] Some of the graves contained well-preserved copper oxides of the decorations with long black hair locked into small bells into which were woven pendants.[citation needed]

In the Oka river valley, the Meshchera culture appears to have disappeared by the 11th century. In the marshy north, they appear to have stayed and to have been converted into the Orthodox faith. The Meshchera nobility appears to have been converted and assimilated by the 13th century, but the common Meshchera huntsman and fisherman may have kept elements of their language and beliefs for a longer period. In the 16th century, the St Nicholas monastery was founded in Radovitsky in order to convert the remaining Meshchera pagans. The princely family Mestchersky in Russia derives its nobility from having originally been native rulers of some of these Finnic tribes.

The Meshchera language is unattested. Some linguists means that it might have been dialect of Mordvinic.[11] But Pauli Rahkonen believs that toponymic evidence suggests it was a Permic or closely related language.[17] It should be noted that Rahkunen's speculations is not supported by other scientists. In particular, the Russian Uralist Vladimir Napolskikh commented on the Rahkunen's article as follows: «This is an absolute, total delirium… But a special abomination of this is that this nonsense comes in a classic journal with a century history in the year of death of A. K. Matveev — the greatest scholar of Finno-Ugric toponymy».[18]

The Mordvins (also Mordva, Mordvinians) remain one of the larger indigenous peoples of Russia. They consist of two major subgroups, the Erzya and Moksha, besides the smaller subgroups of the Qaratay, Teryukhan and Tengushev (or Shoksha) Mordvins who have become fully Russified or Turkified during the 19th to 20th centuries. Less than one third of Mordvins live in the autonomous republic of Mordovia, Russian Federation, in the basin of the Volga River.

The Erzya Mordvins (Erzya: эрзят, Erzyat; also Erzia, Erza), who speak Erzya, and the Moksha Mordvins (Moksha: мокшет, Mokshet), who speak Moksha, are the two major groups. The Qaratay Mordvins live in Kama Tamağı District of Tatarstan, and have shifted to speaking Tatar, albeit with a large proportion of Mordvin vocabulary (substratum). The Teryukhan, living in the Nizhny Novgorod Oblast of Russia, switched to Russian in the 19th century. The Teryukhans recognize the term Mordva as pertaining to themselves, whereas the Qaratay also call themselves Muksha. The Tengushev Mordvins live in southern Mordovia and are a transitional group between Moksha and Erzya. The western Erzyans are also called Shoksha (or Shoksho). They are isolated from the bulk of the Erzyans, and their dialect/language has been influenced by the Mokshan dialects.

The Muromians (Slavic: Мурома) lived in the Oka River basin. They are mentioned in the Primary Chronicle. The old town of Murom still bears their name. The Muromians paid tribute to the Rus princes and, like the neighbouring Merya tribe, were assimilated by the East Slavs in the 11th to 12th century as their territory was incorporated into th Kievan Rus.[19]

Their Muromian language is unattested, but is assumed to have been an member of the Uralic group, likely of the Volga–Finnic subgroup.[11][20][21] A. K. Matveyev identified the toponimic area upon Lower Oka and Lower Klyazma, which corresponds with Muroma. According to the toponymy, Muroma language was close to the Merya language.[22]

The speakers of Permic languages, the Permians, are sometimes considered belonging to the Volga Finnic group of peoples because according to some theories their ancient homeland lies in the Northern part of the Volga River basin.[23]

This article contains content from the Owl Edition of Nordisk familjebok, a Swedish encyclopedia published between 1904 and 1926, now in the public domain.