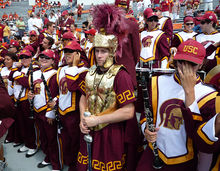 The drum major of the Spirit of Troy wears a more elaborate uniform and conducts the band with a sword.

The Spirit of Troy drum line at Navy Pier in Chicago, October 14, 2005 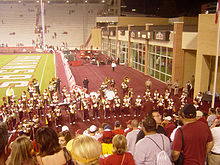 The Spirit of Troy giving a traditional post-game concert, this time celebrating the defeat of the University of Arkansas in Razorback Stadium (2006) 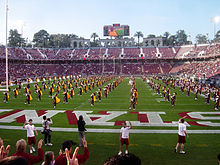 The Spirit of Troy take the field at Stanford Stadium (2006) 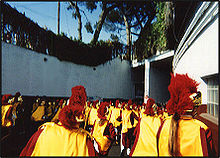 The Spirit of Troy's Tunnel Run

The Spirit of Troy, also known as the University of Southern California Trojan Marching Band (TMB), self-described as "The Greatest Marching Band in the History of the Universe," represents USC at various collegiate sports, broadcast, popular music recording, and national public appearance functions.

The Spirit of Troy is the only collegiate band to have two platinum records.[1][2] The group has performed with numerous celebrities including John Williams, Michael Jackson, Diana Ross, Doc Severinsen, George Clinton, Fleetwood Mac, The Three Tenors, John Dolmayan, Shavo Odadjian, The Offspring and Radiohead.[3] In addition, the band has performed for five U.S. presidents, at the Summer Olympics, and on the Academy Awards, Grammy Awards, and the season 7 finale of American Idol.[4][1]

A contingent of the band has performed at every USC football game, home and away, since 1987. It also makes an international trip at least every other year.

The Trojan Shrine, the symbol of USC and popularly known as "Tommy Trojan", was originally supposed to be named "The Spirit of Troy".[3]

The TMB's first recorded performance was on November 1918 when, at the end of World War I, members of the TMB led a victory parade of America's returning servicemen in New York City. "Fight On", the fight song of the University was composed in 1922 and became a part of the TMB tradition. In 1923, the school's alma mater, "All Hail", was composed by a member of the TMB, Al Wesson. The TMB gave its first national radio concert on CBS on April 19, 1929. The band participated in the 1932 Summer Olympics held in Los Angeles, forming the Olympic Braid in the opening ceremonies in the Los Angeles Memorial Coliseum (coincidentally USC's home stadium).[3]

After wearing various uniforms over the years, particularly those with a military-style, the band began using basic, unadorned Trojan-style helmets and uniforms in 1950. Three years later, the TMB adopted "Conquest", a song composed by Alfred Newman for the film Captain from Castile as a victory march. The TMB made its first trip outside of California in 1954, traveling to Portland, Oregon to play a USC-Oregon game that the Trojans would win, 24–14. During the Grammy Awards of 1966, TMB trumpet alumnus Herb Alpert won three Grammy Awards, including Record of the Year. Dr. Art Bartner took over the program in 1970, and began shaping the band into its current form. Women were allowed to join the band in 1972.[3]

After several more uniform changes, the TMB began using more elaborate Trojan helmets with brushes, visors, and ear flaps in 1972. In 1973 the TMB began its tradition of sending the full band to games at USC-Notre Dame rivalry games at Notre Dame Stadium.[3]

In 1979, the TMB was invited by Fleetwood Mac to perform and record "Tusk", the title song for the album Tusk. The album went double-platinum and was adopted as a part of the TMB's traditional selections.[5][3] Additionally, the band later played on another multi-platinum Fleetwood Mac album, The Dance (1997).[6]

During the 1984 Summer Olympics in Los Angeles, Dr. Bartner directed a 800-member All American College Marching Band, 125 of which were members of the TMB. 1987 featured several significant moments for the band: The TMB trumpets performed the fanfare for Pope John Paul II in his visit to Los Angeles, the band performed during Super Bowl XXI in Pasadena, and the band began its current streak of attending all USC home and away football games. In 1988, the TMB performed again at Super Bowl XXII in San Diego, at the Expo '88 World's Fair held in Brisbane, Australia during that nation's bicentenary.[3]

The band took several more international trips in the 1990s, including to the Berlin Wall after its fall, Amsterdam, Brussels, Innsbruck, Japan, the then-EuroDisneyLand in France, the Seville Expo '92, and to France to commemorate the 50th Anniversary of the D-Day Landings. The band also participated in Super Bowl XXIV in New Orleans, the opening ceremony of the 1994 FIFA World Cup. In 1993, USC alumnus and then U.S. Representative Christopher Cox welcomed the band from the floor of the Congress.[3]

In 2003, the TMB performed during the Chinese New Year celebration in Hong Kong, a year later it also played at the Great Wall of China, Xi'an, Shanghai as well as returning to Hong Kong for the Chinese New Year. The TMB participated in Expo 2005 in Nagoya, Japan, while also performing in Tokyo and Kyoto. In 2006 the TMB went to Italy and performed in Venice, Florence and in front of the Colosseum of Rome.[3] In 2010, the band traveled to Shanghai, China, once again to play for United States National Day at the 2010 World Expo.

At the end of the 2008 season, the TMB appeared in the 95th Rose Bowl. This marks the 33rd time USC has played in the "Granddaddy of Them All".

Ties to the entertainment industry

The Spirit of Troy has appeared in several movies and television shows, including:

The band also appeared in the Academy Award shows of 1976 and 2000 as well as at the 2004 Grammy Awards with OutKast.[4] During the 2009 Grammy Awards, it accompanied Radiohead.[7] The band appeared with Beyoncé Knowles and Hugh Jackman on the 81st Academy Awards in 2009.[8] The Spirit of Troy was used for the opening broadcast of ESPN's West Coast SportsCenter from Los Angeles.[9] The television drama House used a section of the Spirit of Troy to play an April Fools' Day prank on its cast during taping.[10] In 2009, the band played on the show Dancing With the Stars.[11] On April 17, 2010, the band performed Welcome Home with Coheed and Cambria at the Coachella Music Festival. In fall 2010, the band was used to film the promo video for the return of the television show Hawaii Five-0.[12]

The band has played at the Hollywood Bowl's "Tchaikovsky Spectacular" for over 20 years, helping supplement the Los Angeles Philharmonic during an 1812 Overture finale.[4]