Mid-Ohio Sports Car Course is a road course auto racing facility located in Troy Township, Morrow County, Ohio, United States, just outside of the village of Lexington. (Mid-Ohio has also colloquially become a term for the entire north-central region of the state, from south of Sandusky to north of Columbus.) 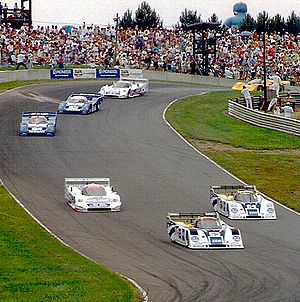 The track opened as a 15-turn, 2.4 mile (3.86 km) road circuit run clockwise. The back portion of the track allows speeds approaching 180 mph (290 km/h). A separate starting line is located on the backstretch to allow for safer rolling starts. The regular start/finish line is located on the pit straight. In 1990, the track underwent a refurbishment. A new retaining wall was built, the entire track was resurfaced, widened, and concrete was paved in the apexes of the turns to prevent asphalt deterioration. In addition, a straightaway was paved through the chicane, allowing for two different track layouts, the original 2.4-mile (3.9 km) circuit, and a new 13-turn, 2.258 mile (3.634 km) circuit. In 1990, the CART series began utilizing the 2.258-mile (3.634 km) layout. In 2006, a second major refurbishment saw several improvements. The entire circuit was repaved, and the concrete patches in the turn apexes were removed. A new motorcycle "short course" was created by connecting turn one with the backstretch, and another motocross oval was created by connecting the chicane straight with the backstretch. The additional layouts allow simultaneous use of the multiple course, for instructional and competitive uses. The improvements also included a motocross facility, that has since been closed. There is grandstand seating for 10,000 spectators, and three observation mounds alongside the track raise the capacity to over 75,000.

The track was opened in 1962 by Les Griebling and several Mansfield-area businessmen as a location for weekend sports car racing. In 1982, Mid-Ohio was purchased by Jim Trueman, a renowned road racer and the founder of Red Roof Inns. Trueman added permanent grandstands, amphitheater-style seating, garages with spectator balconies, a five-story media and hospitality center, underground tunnels and an updated paddock area. In 1990, the track underwent a refurbishment. A new retaining wall was built, the entire track was resurfaced, widened, and concrete was paved in the apexes of the turns to prevent asphalt deterioration. In addition, a straightaway was paved through the chicane, allowing for two different track layouts, the original 2.4-mile (3.9 km) circuit, and a new 13-turn, 2.258 mile (3.634 km) circuit. In 2006, the track again underwent extensive renovation. The track and pit lane were completely resurfaced and connectors were added to the track's famed Keyhole section to allow for three separate road course configurations. Also completed was the removal of concrete patches from the track, the relocation of the wall and guardrail at Turn 1, the expansion of gravel traps at the exits of Turn 1 and the keyhole, the replacement of all remaining old-style catch fencing, and the standardization of curbing throughout the circuit. These changes have resulted in a faster, safer, more competitive and attractive facility for drivers, riders and race fans.

The sports car course operates from April through November each year. During this time, the facility is host for a number of nationally sanctioned race weekends, all of which are open to the public. Mid-Ohio has hosted "closed course" events for kart racing events since the late 1960's sanctioned by I.K.F. & W.K.A. and run by the Dart kart Club with up to 400 entries attending. Karts use the full track with the chicane. Additionally, on site motor home and tent camping spaces are available. The 2011 season marks the 50th in the track's storied history of racing. On March 2, 2011, it was announced that the track had been purchased from Truesports by Green Savoree Racing Promotions, which currently promotes several IndyCar street course races, ending Truesports' 29 years of ownership.[1]

Since 1993, TrueSports, Inc., the parent company of The Mid-Ohio Sports Car Course has owned and operated The Mid-Ohio School. The schools offers licensed drives and motorcycle riders programs in defensive driving, high performance driving and performance track riding programs. Students in each course enjoy classroom and private instruction and group drills. Participants test their newly-refined skills in the controlled environment of the facility's Vehicle Dynamics Center and, in some cases, lap the same track that challenges the world's top racers. The Mid-Ohio School boasts a team of instructors made up of professional, winning drivers that is unmatched by any other school.

Since its inception, The Mid-Ohio School has graduated 41,000 students, including 12,500 teens and 7,500 motorcyclists become better drivers and riders. It has also earned an endorsement and accreditation from SCCA, National Auto Sport Association and the Sportscar Vintage Racing Association.

In 2006, The Mid-Ohio School expanded even further, launching four motorcycle riding programs. The courses offered in 2009 are offered to riders all skill levels, from novice to advanced and allow riders to get their bikes on track at Mid-Ohio Sports Car Course. The addition of this discipline makes The Mid-Ohio School the first and only school in the nation that caters to both driving and motorcycling enthusiasts.