Nazi human experimentation was a series of medical experiments on large numbers of prisoners by the Nazi German regime in its concentration camps mainly in the early 1940s, during World War II and the Holocaust. Prisoners were coerced into participating: they did not willingly volunteer and there was never informed consent. Typically, the experiments resulted in death, disfigurement or permanent disability, and as such can be considered as examples of medical torture. At Auschwitz and other camps, under the direction of Dr. Eduard Wirths, selected inmates were subjected to various hazardous experiments which were supposedly designed to help German military personnel in combat situations, develop new weapons, aid in the recovery of military personnel that had been injured, and to advance the racial ideology backed by the Third Reich.[1] Dr. Aribert Heim conducted similar medical experiments at Mauthausen. Carl Vaernet is known to have conducted experiments on homosexual prisoners in attempts to cure homosexuality. After the war, these crimes were tried at what became known as the Doctors' Trial, and revulsion at the abuses perpetrated led to the development of the Nuremberg Code of medical ethics.

According to the indictments at the Subsequent Nuremberg Trials,[2][3] these experiments included the following:

Experiments on twin children in concentration camps were created to show the similarities and differences in the genetics of twins, as well as to see if the human body can be unnaturally manipulated. The central leader of the experiments was Josef Mengele, who from 1943 to 1944 performed experiments on nearly 1,500 sets of imprisoned twins at Auschwitz. Only 100 individuals survived these studies.[4] While attending University of Munich (located in the city that remained one of Adolf Hitler's focal points during the revolution) studying philosophy and medicine with an emphasis on anthropology and paleontology, Mengele stated: "this simple political concept (fascism) finally became the decisive factor in my life".[5] Mengele's new-found admiration for the "simple political concept" led him to mix his studies of medicine and politics as his career choice. Mengele received his PhD for a thesis entitled "Racial Morphological Research on the Lower Jaw Section of Four Racial Groups", which suggested that a person's race could be identified by the shape of the jaw.[6] The Nazi organization saw his studies as talents, and Mengele was transferred to the German Auschwitz concentration camp located in occupied Poland on May 30, 1943. Contrary to common belief, Mengele was not the only doctor at Auschwitz nor was he even the highest-ranking physician: SS captain Dr. Eduard Wirths was the physician in charge at Auschwitz.[7] There, Mengele organized genetic experiments on twins. The twins were arranged by age and sex and kept in barracks between experiments, which ranged from injection of different chemicals into the eyes of twins to see whether it would change their colour to literally sewing twins together in attempts to create conjoined twins.[8][9]

From about September 1942 to about December 1943 experiments were conducted at the Ravensbrück concentration camp, for the benefit of the German Armed Forces, to study bone, muscle, and nerve regeneration, and bone transplantation from one person to another. Sections of bones, muscles, and nerves were removed from the subjects without use of anesthesia. As a result of these operations, many victims suffered intense agony, mutilation, and permanent disability.

In the summer of 1942 in Baranowicze, Poland, experiments were conducted in a small building behind the private home occupied by Nazi SD Security Service officer Dr. Wichtmann, in which "a young boy of eleven or twelve [was] strapped to a chair so he could not move. Above him was a mechanized hammer that every few seconds came down upon his head." The boy was driven insane from the torture.[10]

In 1941, the Luftwaffe conducted experiments with the intent of discovering means to prevent and treat hypothermia. One study forced subjects to endure a tank of ice water for up to five hours.

Another study placed prisoners naked in the open air for several hours with temperatures as low as -6°C (21°F). Besides studying the physical effects of cold exposure, the experimenters also assessed different methods of rewarming survivors.[12]

The freezing/hypothermia experiments were conducted for the Nazi high command to simulate the conditions the armies suffered on the Eastern Front, as the German forces were ill-prepared for the cold weather they encountered. Many experiments were conducted on captured Russian troops; the Nazis wondered whether their genetics gave them superior resistance to cold. The principal locales were Dachau and Auschwitz. Dr Sigmund Rascher, an SS doctor based at Dachau, reported directly to Reichsführer-SS Heinrich Himmler and publicised the results of his freezing experiments at the 1942 medical conference entitled "Medical Problems Arising from Sea and Winter".[13] Approximately 100 people are reported to have died as a result of these experiments.[14]

From about February 1942 to about April 1945, experiments were conducted at the Dachau concentration camp in order to investigate immunization for treatment of malaria. Healthy inmates were infected by mosquitoes or by injections of extracts of the mucous glands of female mosquitoes. After contracting the disease, the subjects were treated with various drugs to test their relative efficiency. Over 1,000 people were used in these experiments, and of those, more than half died as a result. [15]

At various times between September 1939 and April 1945, many experiments were conducted at Sachsenhausen, Natzweiler, and other camps to investigate the most effective treatment of wounds caused by mustard gas. Test subjects were deliberately exposed to mustard gas and other vesicants (e.g. Lewisite) which inflicted severe chemical burns. The victims' wounds were then tested to find the most effective treatment for the mustard gas burns.[16] 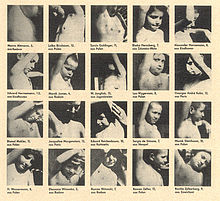 Children of the Bullenhuser Damm show incisions where axillary lymph nodes had been surgically removed after they were deliberately infected with tuberculosis at Neuengamme. In a "cover-up" operation, all were murdered with their 4 adult Jewish caretakers and 6 Red Army POWs in the basement of the school on April 20, 1945 as British forces approached

From about July 1942 to about September 1943, experiments to investigate the effectiveness of sulfonamide, a synthetic antimicrobial agent, were conducted at Ravensbrück.[17] Wounds inflicted on the subjects were infected with bacteria such as Streptococcus, Clostridium perfringens (the causative agent in gas gangrene) and Clostridium tetani, the causative agent in tetanus.[18] Circulation of blood was interrupted by tying off blood vessels at both ends of the wound to create a condition similar to that of a battlefield wound. Infection was aggravated by forcing wood shavings and ground glass into the wounds. The infection was treated with sulfonamide and other drugs to determine their effectiveness.

From about July 1944 to about September 1944, experiments were conducted at the Dachau concentration camp to study various methods of making sea water drinkable. At one point, a group of roughly 90 Roma were deprived of food and given nothing but sea water to drink by Dr. Hans Eppinger, leaving them gravely injured.[13] They were so dehydrated that others observed them licking freshly mopped floors in an attempt to get drinkable water.[19]

From about March 1941 to about January 1945, sterilization experiments were conducted at Auschwitz, Ravensbrück, and other places by Dr. Carl Clauberg.[16] The purpose of these experiments was to develop a method of sterilization which would be suitable for sterilizing millions of people with a minimum of time and effort. These experiments were conducted by means of X-ray, surgery and various drugs. Thousands of victims were sterilized. Aside from its experimentation, the Nazi government sterilized around 400,000 individuals as part of its compulsory sterilization program.[20] Intravenous injections of solutions speculated to contain iodine and silver nitrate were successful, but had unwanted side effects such as vaginal bleeding, severe abdominal pain, and cervical cancer.[21] Therefore, radiation treatment became the favored choice of sterilization. Specific amounts of exposure to radiation destroyed a person’s ability to produce ova or sperm. The radiation was administered through deception. Prisoners were brought into a room and asked to complete forms, which took two to three minutes. In this time, the radiation treatment was administered and, unknown to the prisoners, they were rendered completely sterile. Many suffered severe radiation burns.[22]

Somewhere between December 1943 and October 1944, experiments were conducted at Buchenwald to investigate the effect of various poisons. The poisons were secretly administered to experimental subjects in their food. The victims died as a result of the poison or were killed immediately in order to permit autopsies. In September 1944, experimental subjects were shot with poisonous bullets, suffered torture and often died.[16]

From around November 1943 to around January 1944, experiments were conducted at Buchenwald to test the effect of various pharmaceutical preparations on phosphorus burns. These burns were inflicted on prisoners using phosphorus material extracted from incendiary bombs.[16]

In early 1942, prisoners at Dachau concentration camp were used by Rascher in experiments to aid German pilots who had to eject at high altitudes. A low-pressure chamber containing these prisoners was used to simulate conditions at altitudes of up to 20,000 m (66,000 ft). It was rumored that Rascher performed vivisections on the brains of victims who survived the initial experiment.[23] Of the 200 subjects, 80 died outright, and the others were executed.[13]

Many of the subjects died as a result of the experiments conducted by the Nazis, while many others were murdered after the tests were completed to study the effect post mortem.[24] Those who survived were often left mutilated, suffering permanent disability, weakened bodies, and mental distress.[13][25] On August 19, 1947, the doctors captured by Allied forces were put on trial in USA vs. Karl Brandt et al., which is commonly known as the Doctors' Trial. At the trial, several of the doctors argued in their defense that there was no international law regarding medical experimentation.

The issue of informed consent had previously been controversial in German medicine in 1900, when Dr. Albert Neisser infected patients (mainly prostitutes) with syphilis without their consent. Despite Neisser's support from most of the academic community, public opinion, led by psychiatrist Albert Moll, was against Neisser. While Neisser went on to be fined by the Royal Disciplinary Court, Moll developed "a legally based, positivistic contract theory of the patient-doctor relationship" that was not adopted into German law.[26] Eventually, the minister for religious, educational, and medical affairs issued a directive stating that medical interventions other than for diagnosis, healing, and immunization were excluded under all circumstances if "the human subject was a minor or not competent for other reasons" or if the subject had not given his or her "unambiguous consent" after a "proper explanation of the possible negative consequences" of the intervention, though this was not legally binding.[26]

In response, Drs. Leo Alexander and Andrew Conway Ivy drafted a ten point memorandum entitled Permissible Medical Experiment that went on to be known as the Nuremberg Code.[27] The code calls for such standards as voluntary consent of patients, avoidance of unnecessary pain and suffering, and that there must be a belief that the experimentation will not end in death or disability.[28] The Code was not cited in any of the findings against the defendants and never made it into either German or American medical law.

Contemporary knowledge concerning the manner in which the human body reacts to freezing is based almost exclusively on these Nazi experiments. This, together with the recent use of data from Nazi research into the effects of phosgene gas, has proven controversial and presents an ethical dilemma for modern physicians who do not agree with the methods used to obtain this data.[19] Similarly, controversy has arisen from the use of results of biological warfare testing done by the Imperial Japanese Army's Unit 731.[29] However, the results from Unit 731 were kept classified by the United States and the majority of doctors involved were given pardons.[30]

Controversy regarding use of findings