Color of water
For the book by James McBride, see The Color of Water. 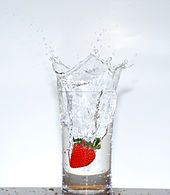 When water is in small quantities (e. g. in a glass) it appears colorless to the human eye

The color of water is a subject of both scientific study and popular misconception. While relatively small quantities of water are observed by humans to be colorless, pure water has a slight blue color that becomes a deeper blue as the thickness of the observed sample increases. The blue hue of water is an intrinsic property and is caused by selective absorption and scattering of white light. Impurities dissolved or suspended in water may give water different colored appearances.

For more details on this topic, see Electromagnetic absorption by water.

The intrinsic natural color of liquid water may be demonstrated by looking at a white light source through a long pipe, filled with purified water, that is closed at both ends with a transparent window. The light turquoise blue color is caused by weak absorption in the red part of the visible spectrum.[1]

For most substances, absorptions in the visible spectrum are usually attributed to excitations of electronic energy states. However, water is a simple 3-atom molecule, H2O, and all its electronic absorptions occur in the ultraviolet region of the electromagnetic spectrum and are therefore not responsible for the color of water in the visible region of the spectrum.[citation needed]

The water molecule has three fundamental modes of vibration, including two stretching vibrations of the O-H bonds which occur at v1 = 3650 cm−1 and v3 = 3755 cm−1. Absorption due to these vibrations occurs in the infrared region of the spectrum. The absorption in the visible spectrum is due mainly to the harmonic v1 + 3v3 = 14,318 cm−1, which is equivalent to a wavelength of 698 nm.[1]

Absorption intensity decreases markedly with each successive overtone, resulting in very weak absorption for the third overtone. For this reason, the pipe needs to have a length of a metre or more and the water must be purified by microfiltration to remove any particles that could produce Rayleigh scattering.[citation needed]

Color of lakes and oceans 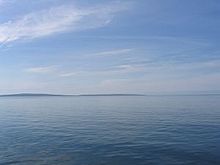 It is a common misconception[citation needed] that in large bodies, such as the oceans, the water's color is blue due to the reflections from the sky on its surface.

The opportunity to visibly observe the blue color of water from land or airplanes is provided by the optical scattering of unabsorbed light from water molecules, from white sandy ocean bottoms, as well as from suspended particles in the water. The back-scattering from water molecules alone is very small and only observable in highly purified water.[citation needed]

Some constituents of sea water can influence the shade of blue of the ocean. This is why it can look greener or bluer in different areas. Water in swimming pools (which may also contain various chemicals) with white-painted sides and bottom will appear as a turquoise blue.[citation needed] 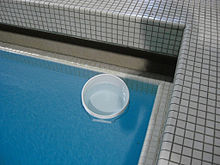 An indoor swimming pool appears blue from above, as light reflecting from the bottom of the pool travels through enough water that its red component is absorbed. The same water in a smaller bucket looks only slightly blue[2]

Clean water appears blue in white-tiled swimming pools as well as in indoor pools where there is no blue sky to be reflected. The deeper the pool, the bluer the water.[3]

Scattering from suspended particles also plays an important role in the color of lakes and oceans. A few tens of meters of water will absorb all light, so without scattering, all bodies of water would appear black. Because most lakes and oceans contain suspended living matter and mineral particles, known as colored dissolved organic matter (CDOM) light from above is reflected upwards. Scattering from suspended particles would normally give a white color, as with snow, but because the light first passes through many meters of blue-colored liquid, the scattered light appears blue. In extremely pure water—as is found in mountain lakes, where scattering from white-colored particles is missing—the scattering from water molecules themselves also contributes a blue color.[citation needed] 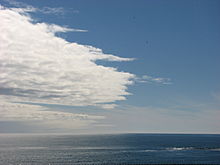 The hue of the reflected sky also contributes to the perceived color of water.

Another phenomenon that occurs is Rayleigh scattering in the atmosphere along one's line of sight: the horizon is typically 4–5 km distant and the air (being just above sea level in the case of the ocean) is at its densest. This mechanism would add a blue tinge to any distant object (not just the sea) because blue light would be scattered into one's line of sight.[citation needed]

The surfaces of seas and lakes often reflect blue skylight, making them appear bluer. The relative contribution of reflected skylight and the light scattered back from the depths is strongly dependent on observation angle.[citation needed]

Glaciers are large bodies of ice and snow formed during very cold climates by processes involving the compaction of fallen snow. While snowy glaciers appear white from a distance, up close and when shielded from direct ambient light, glaciers usually appear a deep blue due to the long path lengths of the internal reflected light.[citation needed] 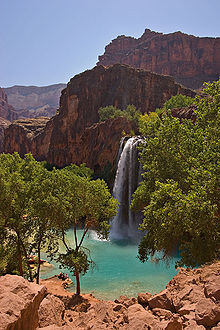 High concentrations of dissolved lime give the water of Havasu Falls a turquoise color.

Dissolved and particulate material in water can cause discoloration. Slight discoloration is measured in Hazen units (HU).[4] Impurities can be deeply colored as well, for instance dissolved organic compounds called tannins can result in dark brown colors, or algae floating in the water (particles) can impart a green color.

The color of a water sample can be reported as:

Testing for color can be a quick and easy test which often reflects the amount of organic material in the water, although certain inorganic components like iron or manganese can also impart color.[citation needed]

Water color can reveal physical, chemical and bacteriological conditions that give them the colors. In public and domestic drinking water they can be as such: Green can represent copper leaching from copper plumbing and, can also, represent algae growth. Blue can represent represent copper also and can represent a syphoning of industrial cleaners in the tank of commodes, commonly known as backflowing. Reds can be both signs of rust from iron pipes and airborne bacteria's from lakes etc. Black water can indicate sulfur reducing bacteria growth inside of a hot water tank set at less than 120 degrees temperature. This is normally present with a strong sulfur or rotten egg odor and is easily corrected by draining the water heater and increasing the temperature to 120 or higher. Caution should be given if children or elderly will be using the hot water. The presence of a rotten egg odor will always be in the hot water side if sulfate reducing bacteria is the cause and never in the cold water side. The color spectrum with water indicators is wide and, if learned, can make solving cosmetic, bacteriological and chemical problems easier to identify.[citation needed]

The presence of color in water does not necessarily indicate that the water is not potable. Color-causing substances such as tannins may be harmless.[citation needed]

Color is not removed by typical water filters; however, slow sand filters can remove color, and the use of coagulants may also succeed in trapping the color-causing compounds within the resulting precipitate.[citation needed]

Other factors can affect the color we see: 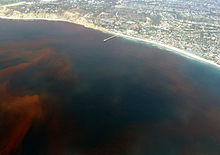 Red tide off the Californian coast.

Various cultures divide the semantic field of colors differently than the English language usage and do not make the blue-green distinction in the same way. An example is Welsh where glas is the color of the sea and also that of grass.[citation needed]

Other color names assigned to bodies of water are sea green and ultramarine blue. Unusual oceanic colorings have given rise to the terms red tide and black tide.

Furthermore, the Ancient Greek poet Homer uses the epithet "wine-dark sea"; in addition, he also describes the sea as "grey". Some[who?] have suggested that this is due to the Ancient Greeks classifying colors primarily by luminosity rather than hue.[citation needed]