This article provides an overview of the telecommunications infrastructure in San Marino.

San Marino has only one television network, San Marino RTV, which is owned by a company with the same name.[1] In 1997, there were approximately 9,000 televisions in the country.

There are no telephone providers in San Marino, instead using the Italian system. In 2002 there were 20,600 landlines in use, as well as 16,800 mobile phones. 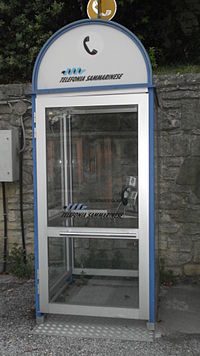