Dry Island Buffalo Jump Provincial Park is a provincial park in Central Alberta, Canada, located about 103 km (64 mi) southeast of Red Deer and 16 km (9.9 mi) east of Trochu. The park is situated along the Red Deer River and features badlands topography. Its name derives from the large plateau in the middle of the park, 200 m (660 ft) above the Red Deer River, which has never been developed by humans and retains virgin prairie grasses.

The park is the site of an ancient buffalo jump, where Cree native people drove bison over the cliffs in large numbers to provide for their tribes. The hills also contain unique flora and fauna that are not found this far east of the Rocky Mountains in as large numbers as at Dry Island. The park contains the most important Albertosaurus bone bed in the world, which was first discovered by Barnum Brown around the turn of the twentieth century and rediscovered by Dr. Phil Currie in 1997. The bone bed excavation was halted at the end of August, 2005. Dr. Currie left the Royal Tyrrell Museum in October 2005 to become the Canada Research Chair with the Biological Sciences Department at the University of Alberta. Under university auspices, excavation at the bone bed has continued in the summers of 2006, 2007 and 2008. 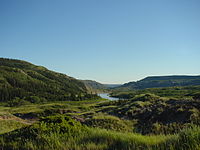 The Red Deer River valley inside the park.

The following activities are available in the park:[1]