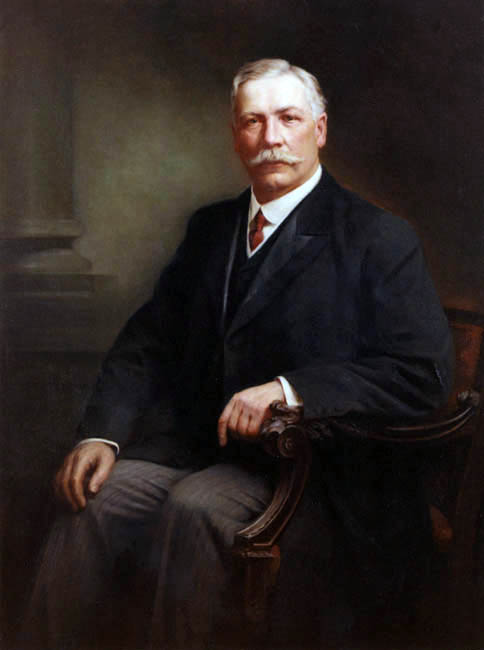 Alexander Cameron Rutherford is widely known as the "architect of the province" and "father of the university" of Alberta, as the province's first Premier. He was famous for his incredibly strong support of education and for his active participation in community affairs. As a long term visionary Alexander Cameron Rutherford was looking forward to becoming one of the world's major centres of advanced intellectual and industrial activity in the context of a British system of government.

Alexander Cameron Rutherford was born on 2 February 1857, on a farm near Osgoode Township, Carleton County, . He was the son of James Rutherford and Elizabeth Cameron, who were members of the Baptist Church of Canada. He was educated at a local public school and the Canadian Literary Institute, located in . In 1881, he graduated from in , receiving both and degrees.

In 1895, after visiting the previous year on business, Alexander Cameron Rutherford and his family moved to , where he established a thriving law practice in the town of Strathcona, in the community of South , in the District of , of the Northwest Territories. After practicing law on his own for five years, he expanded by jointly establishing the firm of Rutherford and Jamieson in 1899. Notably, from 1896 to 1905, his contribution to public service included acting as the Secretary-Treasurer of the South Edmonton School Board, and from 1899 to 1906 he became the Secretary-Treasurer of, and Solicitor for, the rapidly growing Town of Strathcona.

Following his election as President of the in August 1905, he was subsequently appointed by Lieutenant-Governor , the day after the was established. Alexander Cameron Rutherfords' government was ratified and sustained by a large majority at the 1905 Alberta general election, on the basis of the Provincial Liberal Convention platform, formed in Calgary, on Thursday 3 August 1905. As well as serving as Premier during the , Alexander Cameron Rutherford was also Provincial Treasurer and Minister of Education.

Alexander Rutherford was born in 1857, on a farm in Carleton County, . In 1881 he graduated from with Bachelor of Arts and Bachelor of Civil Law degrees. In 1885 he was called to the Ontario Bar, practicing at the law firm of Hodgkins, Kidd, and Rutherford. In 1895 he moved to the District of in western Canada (then still part of the ), where he continued to practice law by opening up his own office at the railhead of the Calgary and Edmonton Railway, then known as South Edmonton. Alexander Rutherford was the first lawyer south of the , an area later to become known as Strathcona (amalgamating with in 1912). After the amalgamation, the firm opened a branch office north of the river.

Alexander Cameron Rutherford was joined in the practice of law by Stanley Harwood McCuaig, who articled with the firm and later married Rutherford's daughter Hazel. That firm, Rutherford McCuaig, continues to operate in as one of 's oldest law firms, [http://www.mccuaig.com McCuaig Desrochers] .

In 1902 Rutherford was elected to the for Strathcona. Rutherford supported the Government of Premier Frederick Haultain.

The Rutherford Liberal Government proceeded with:

* establishing the laws necessary to make the transition from territorial to provincial status
* organizing and setting up the new Alberta capital
* building the new
* creating the public telephone system - (AGT); privatized as in 1990
* expanding roads and railways up to the subarctic regions, including the and
* organizing and building thousands of schools for the K-12 system
* establishing the as a world class British university

Rutherford took particular interest in the education system and rapidly expanded Alberta's public school system. In 1906, he initiated legislation founding the and personally selected the site in Strathcona for the university campus. At the general election of 1909, the Rutherford Liberal Government was re-elected with another strong majority, and Alexander Cameron Rutherford continued to serve as Premier, Provincial Treasurer, and Minister of Education. In early 1910 Alexander Cameron Rutherford bought a lot near the newly established campus and in 1911 built his family a home, which he called "" (now known as ) after his ancestral residence in .

Although Rutherford's popular government promoted railway and road expansion and the creation of a public telephone system, he along with the entire governing cabinet was forced to resign as premier on 26 May 1910, over allegations of , Rutherford returned to the practice of law with the now expanded firm, Rutherford, Jamieson, and Grant.

Rutherford later joined the federal Conservatives, campaigning for them in the 1921 federal election.

Rutherford encouraged his only son, Cecil Alexander Rutherford, to serve with the Artillery as a Second Lieutenant for the duration of while Cecil's wife, Helen Reid Rutherford, lived with the Rutherford family at Achnacarry, now known as . Cecil served in the artillery with distinction, taking a shrapnel hit to the back of the head under his helmet, narrowly missing the spinal column. Cecil returned to the front lines, after a brief respite in . During this time, Alexander Cameron Rutherford served back on the home front as the Alberta Director of the National Service Commission, and immediately after World War I served as a member of the Loan Advisory Committee of the .

Alexander Cameron Rutherford had many concurrent associations, including serving as:

In 1927, at the age of 70, Alexander Cameron Rutherford was appointed Chancellor of the .

Alexander Cameron Rutherford's service to his community and the Province of has been recognized in many ways:

* In 1911, a new elementary school in Edmonton was named after him - Rutherford Elementary School [ [http://rutherford.epsb.ca ] at rutherford.epsb.ca]
** Alexander Cameron Rutherford believed that a high quality education system was of paramount importance
* In 1951, the first free-standing University of Alberta library was named in his memory -
** This was quite a fitting honour, as Alexander Cameron Rutherford was an avid book collector, with a large personal library in his house near the University of Alberta campus. Much of his personal collection was dedicated to Canadian works, including a white leather bound edition of . Recently, the original Rutherford Library has been expanded in the newer, much larger, modern Rutherford Library North.
* In 1954, a mountain located in was named after him - Some of Alexander Cameron Rutherford's most treasured honours:

Alexander Cameron Rutherford passed away on 11 June 1941, at the age of 84, in Edmonton, and is buried in the Mount Pleasant Cemetery, in the Rutherford family plot.