Ottokar was the second son of King Wenceslaus I of the Přemyslid dynasty, and through his mother, Kunigunde of Hohenstaufen, was related to the Hohenstaufen family, being a grandson of the German king, Philip of Swabia.

Ottokar was originally educated for the role of an ecclesiastical administrator. However, after the death in 1247 of Vladislaus, Margrave of Moravia, Ottokar's older brother and the heir of Bohemia, Ottokar became the heir. According to popular oral tradition, Ottokar was profoundly shocked by his brother's death and did not involve himself in politics, becoming focused on hunting and drinking. In 1248 he was enticed by discontented nobles to lead a rebellion against his father, King Wenceslaus. During this rebellion he received the nickname "the younger King" (mladší král).

Wenceslaus managed to defeat the rebels and imprisoned his son.[1] Ottokar II held the title of King of Bohemia from 31 July 1248 to November, 1249.[2]

Father and son were eventually reconciled to assist the King's aim of acquiring the neighbouring Duchy of Austria. The Duchy had been without a ruler since the death of Duke Frederick II in 1246. Wenceslaus initially attempted to acquire the duchy by marrying his heir, Vladislav, to the last Duke's niece Gertrude. That match had been cut short by Vladislav's death and Gertrude's re-marriage to the Margrave of Baden. The latter was rejected by the Austrian estates and could not establish his rule in Austria. Wenceslaus used this as pretext to invade Austria in 1250 – according to some sources, the estates called upon him in to restore order.

Wenceslaus released Ottokar very soon and in 1251 made him Margrave of Moravia and installed him, with the approval of the Austrian nobles, as governor of Austria. Ottokar entered Austria, where the estates acclaimed him as Duke. To legitimize his position, Ottokar married the late Duke's (Frederick II) sister Margaret, who was his senior by thirty years and was the widow of Henry of Hohenstaufen (who, ironically, had been engaged to Ottokar's aunt Saint Agnes of Bohemia prior to marrying Margaret). Their marriage took place on 11 February 1252.[2][3] 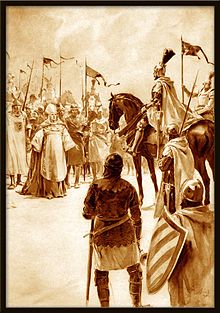 In 1253, King Wenceslaus died and Ottokar succeeded his father as King of Bohemia. After the death of the German King Konrad IV in 1254, Ottokar also hoped to obtain the Imperial dignity for himself, but his election bid was unsuccessful and instead Richard of Cornwall was elected.

Building up of the empire

Feeling threatened by Ottokar's growing regional power, his cousin Béla IV, King of Hungary challenged the young King. Bela formed a loose alliance with the Duke of Bavaria and claimed the Duchy of Styria, which had been a component of Austria since 1192. The conflict was quelled through the Pope's mediation. It was agreed that Ottokar was to yield large parts of Styria to Bela in exchange for recognition of his right to the remainder of Austria. However, after a few years the conflict resumed and Ottokar defeated the Hungarians in July 1260 at the Battle of Kressenbrunn.

Bela now ceded Styria back to Ottokar, and his claim to those territories was formally recognized by Richard, Earl of Cornwall who was King of the Romans, the nominal liege lord of all German lands. This peace agreement was also sealed by a royal marriage. Ottokar ended his marriage to Margaret and married Bela's young granddaughter Kunigunda of Slavonia. Kunigunde became the mother of his children, the youngest of them became his only legitimate son Wenceslaus.

Ottokar II also led two expeditions against the pagan Old Prussians and founded Königsberg, which was named in his honour and later became the capital of Prussia.

In 1269 he inherited Carinthia and part of Carniola. His claim was once again contested by the Hungarians on the field of battle. After another victory he became the most powerful prince within the Empire.

The way to the final battle

A new election for the Imperial German throne took place in 1273. But Ottokar was again not the successful candidate. He refused to recognize his victorious rival, Rudolph of Habsburg, and urged the Pope to adopt a similar policy. At a convention of the Reichstag at Frankfurt in 1274, Rudolph decreed that all imperial lands that had changed hands since the death of Emperor Frederick II must be returned to the crown. This would have deprived Ottokar of Styria, Austria, and Carinthia.

In 1276 Rudolph placed Ottokar under the ban of the empire and besieged Vienna. This compelled Otakar in November 1276 to sign a new treaty by which he gave up all claims to Austria and the neighbouring duchies, retaining for himself only Bohemia and Moravia. Ottokar's son Wenceslaus was also betrothed to Rudolph's daughter Judith. It was an uneasy peace. Two years later, the Bohemian king tried to recover his lost lands by force. Ottokar found allies and collected a large army, but he was defeated by Hungarian assistance and killed at the Battle of Dürnkrut and Jedenspeigen on the March on 26 August 1278.

His son Wenceslaus II of Bohemia succeeded him as King of Bohemia and Margrave of Moravia.

On 11 February 1252, Ottokar married Margaret, Duchess of Austria. Margaret was sick and left the marriage childless when she was repudiated in 1261.[3] On 25 October 1261, Ottokar married his second wife Kunigunda of Slavonia. They probably had four children[4]:

Ottokar had two natural sons and some daughters, the most important of this issue was Nicholas I, Duke of Troppau (Czech: Mikuláš I. Opavský, Polish: Mikołaj I Opawski). His first born child was never accepted as the crown prince to the Bohemian crown by the sitting pope, and was therefore in 1269 given the Duchy of Opava instead.

From the marriage with Kunigunda:

Ottokar is considered the greatest King of Bohemia, together with Charles IV. He was a founder of many new towns (about 30—not only in Bohemia, Moravia and Silesia, but also in Austria and Styria) and incorporated many existing settlements through civic charters. He was a strong proponent of trade, law and order. Furthermore, he instituted open immigration policies through which skilled German-speaking immigrants settled in major cities throughout his domains. The great eastern German city of Königsberg was named in his honour as a tribute for his support of the Teutonic Knights in their war with the pagan Sambians.

He is a famous figure both in history and in folkloric legend. In the Divine Comedy by Dante, Ottokar is seen outside the gates of Purgatory, in amiable companionship with his imperial rival Rudolph. He is also the protagonist of a tragedy by the 19th-century Austrian playwright Franz Grillparzer.

In the painting, "Přemysl Otakar II: The Union of Slavic Dynasties," part of Alfons Mucha's 20-canvas work, The Slav Epic, Ottokar is depicted at his niece's wedding celebration, forging alliances with other Slavik rulers in attendance.