The Enterprise-D also appears in the pilot episode of Star Trek: Deep Space Nine ("Emissary"),[2] and the series finale of Star Trek: Enterprise ("These Are the Voyages..."). In its last appearance, during Star Trek Generations, the ship's stardrive section is lost as a result of a warp core breach, and the saucer section crash lands on the surface of Veridian III.[2]

Andrew Probert, who assisted in updating the original Enterprise for Star Trek: The Motion Picture, designed the Enterprise-D.[2] Originally tasked with designing the bridge, Probert had a "what if" sketch hanging on his wall that he had drawn after working on The Motion Picture. Story editor David Gerrold saw the sketch and brought it to creator Gene Roddenberry's attention, who approved the sketch as a starting point for the Enterprise-D's design.

An Industrial Light & Magic team supervised by Ease Owyeung built two filming miniatures (a six foot model and a two foot model) for "Encounter at Farpoint", the Star Trek: The Next Generation pilot, and these models were used throughout the first two seasons.[3] For the third season, model-maker Greg Jein built a four foot miniature, which had an added layer of surface plating detail.[3] The six foot model was used whenever a saucer separation sequence needed to be filmed, and was then updated by ILM for use in Star Trek Generations.[citation needed] In October 2006, the six foot Enterprise shooting miniature was auctioned in New York City at Christie's auction house, along with other models, props, costumes, and set pieces from the Star Trek franchise. Its projected value was $20,000 to $30,000, but the final sale price was $576,000. It was the most expensive item in the auction.[4]

ILM's John Knoll also built a CGI Electric Image model of the Enterprise-D for the 1994 film Star Trek Generations.[2] That model was transferred to LightWave and used to create various Galaxy-class starships in episodes of Star Trek: Deep Space Nine and in the Star Trek: Voyager episode "Timeless".[citation needed]

The Enterprise-D is first seen in the episode "Encounter at Farpoint" under the command of Captain Jean-Luc Picard. Several episodes, as well as the ship's dedication plaque, establish that the Enterprise was built at the Utopia Planitia Fleet Yards in orbit of Mars.[3] The Enterprise-D is the third Galaxy class starship, after the pathfinder ship USS Galaxy (from which the Galaxy class takes its name) and the USS Yamato.[3] The dedication plaque gives its commissioning date as 40759.5, which was intended to represent October 4, 2363.[3]

Throughout the course of Star Trek: The Next Generation, the ship's crew makes first contact with multiple species, including the Borg in "Q Who?" and the Q Continuum in "Encounter at Farpoint".[2] The Enterprise-D is instrumental in the defeat of the Borg during their 2366 attempt to invade the Federation in "The Best of Both Worlds, Part II". 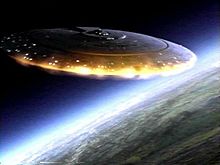 In 2371, as depicted in Star Trek Generations, the Klingon Duras sisters obtain the phase modulation frequency of the Enterprise-D's shields, rendering them useless.[2] Although the Enterprise-D destroys the sisters' ship, damage to the warp drive coolant system prompts an emergency saucer separation.[2] The warp core breaches moments after the saucer begins to move away, destroying the ship's stardrive section.[2] The resulting shockwave impacts the saucer, disabling propulsion and other primary systems, sending it into Veridian III's atmosphere.[2] Caught in the planet's gravity, the saucer section crash lands on the surface, damaged beyond repair.[2] It was replaced by the Enterprise-E, which was introduced in the film Star Trek: First Contact.

According to commentary on the Star Trek Generations DVD, one of the real world reasons for the Enterprise-D's destruction stems from a concept drawing of a saucer section landing, produced for the Star Trek: The Next Generation Technical Manual. TNG writers Ronald D. Moore, Jeri Taylor, and Brannon Braga saw the drawing and wanted to use a saucer crash as a sixth season cliffhanger episode for the series, but were unable to do so because of a limited budget and resistance from producer Michael Piller.[citation needed]

In the alternate future featured in the TNG series finale "All Good Things...", the Enterprise-D is intact in 2395.[2] In this alternate future, the ship is decommissioned and becomes the personal flagship of Admiral William Riker and has undergone major refits, including the addition of a third warp nacelle, new weapons, and a cloaking device.[2] This future timeline arises from a temporal anomaly that Picard, with Q's help, manages to eliminate.

The Galaxy-class Enterprise is capable of saucer separation and subsequent re-docking, used sometimes for leaving the civilian population behind when the stardrive section goes into combat,[3] as seen in the The Next Generation episodes "Encounter at Farpoint",[5] and "The Arsenal of Freedom",[6] for the additional combat advantage of having two separate vessels instead of one, as seen in "The Best of Both Worlds, Part II",[7] or as a lifeboat[3] as seen in the film Star Trek Generations.[8] The Enterprise was the only starship seen in any of the television series to perform saucer separation until the USS Prometheus during the fourth season of Star Trek: Voyager. 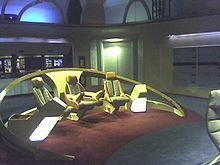 The main bridge replicated for exhibition.

The main bridge of the Galaxy class Enterprise is located on deck 1. Three distinct Galaxy class bridge variants have been seen with a fourth from the alternate future variant of the season finale: the Enterprise bridge in The Next Generation (which undergoes a redesign in the first two seasons), the Enterprise bridge in Star Trek Generations,[8] and the USS Odyssey bridge in the Star Trek: Deep Space Nine episode "The Jem'Hadar".[9] The Galaxy-class Enterprise also has a secondary battle bridge on deck eight of the secondary hull for use when the ship has undergone a saucer separation. It is first seen in the TNG episode "Encounter at Farpoint" and again in "The Arsenal of Freedom", with an updated version appearing in "The Best of Both Worlds".

The aft stations on the bridge. From left to right they are: Science I, Science II, Environment, Mission Ops, and Engineering.

The Galaxy-class Enterprise is armed with twelve Type X phaser arrays and three photon torpedo launchers, each capable of firing ten individual torpedoes at a time.[3] One phaser array is mounted on the "cobra head" of the secondary hull while a photon torpedo launcher is mounted on the ventral aft of the saucer; both are inoperative while the saucer and stardrive sections are docked.[3] The ship also has a high capacity shield grid[3] and, according to dialogue in the Next Generation episode "Conundrum",[10] at least 250 photon torpedoes.

The Galaxy-class Enterprise has at least six transporter rooms and twenty transporter systems. The ship has one large main shuttlebay in the saucer section, supported by two smaller bays in the stardrive section. The ship carries a variety of shuttlecraft and a captain's yacht.[3]

The Galaxy-class Enterprise includes a sickbay and a number of labs and other medical facilities.[3] The shuttlebays, cargo bays, and other areas of the ship can be converted into triage wards;[3] such conversion of a cargo bay appears in the TNG episode "Ethics".[11] Other areas, such as Ten Forward, can serve as emergency shelters.[3] Such use of Ten Forward occurs in the Next Generation episode "Disaster".[12]

Various Next Generation episodes show that the Galaxy-class Enterprise has amenities such as holodecks,[5] an arboretum, a school,[13] a gymnasium,[14] amphitheaters,[15] and a bar called Ten Forward.[16] According to "Encounter at Farpoint",[5] several Enterprise crewmembers' civilian family members (including children) are aboard despite the fact that the Enterprise routinely faces situations that could easily end with the complete destruction of the ship with all hands. Some civilians work aboard the ship, such as the bartender Ben in "Lower Decks"[17] and botanist Keiko O'Brien in "Rascals"[18] and other episodes.