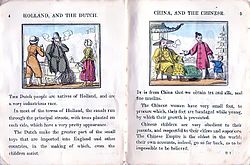 A 19th century children's book informs its readers that the Dutch were a very industrious race, and that Chinese children were very obedient to their parents (implicitly, relative to the British).

Mores, in sociology, are any given society's particular norms, virtues, or values. The word mores (English pronunciation: /ˈmɔəreɪz/ or /ˈmɔəriːz/, from the Latin plural mōrēs; singular mōs) is a plurale tantum term borrowed from Latin, which has been used in the English language since the 1890s.

Folkways, in sociology, are any informal mores characterized by being followed through imitation and mild social pressure but not strictly enforced or put into law. The term folkways, introduced by American sociologist William Graham Sumner in 1907, sees some use, especially in more modern sociology.[1] A specific practice within a wider system of mores is known as a custom, so that this term is sometimes used as the approximate singular of "mores."

Mores derive from the established practices of a society rather than its written laws. They consist of shared understandings about the kinds of behavior likely to evoke approval, disapproval, toleration or sanction, within particular contexts.

The English word morality comes from the same root, as does the noun moral. However, mores do not, as is commonly supposed, necessarily carry connotations of morality. Rather, morality can be seen as a subset of mores, held to be of central importance in view of their content, and often formalized in some kind of moral code.

The Greek term equivalent to Latin mores is ethos (εθος, ηθος). As with the relation of mores to morality, ethos is the basis of the term ethics, but does not itself carry connotations of morality as much as of customary proper behavior peculiar to a given society.

The Middle English  Ormulum still had sedeful "modest, virtuous, chaste", but the word was extinct by the Early Modern English period. It survives in modern Scandinavian and Continental Germanic languages. Modern German Sitte translates to "custom, convention" but also to "decency"; the abstract noun Sittlichkeit translates to "morals, morality". Likewise, the Modern Dutch wikt:zeden also refers to morality. The related term wikt:zindelijkheid means the capability to control ones own natural urges, especially used in relation to urination and defaecation in children and animals.

The meaning of all these terms extend to all customs of proper behavior in a given society, both religious and profane, from more trivial conventional aspects of costume, etiquette or politeness, "folkways" enforced by gentle social pressure, but going beyond mere "folkways" or conventions in including moral codes and notions of justice down to strict taboos, behavior that is unthinkable within the society in question, very commonly including incest and murder, but also the commitment of outrages specific to the individual society such as blasphemy. Such religious or sacral customs may be unpredictable and vary completely from one culture to another: while uttering the name of God may be a taboo in one culture, uttering it as often as possible may be considered pious in the extreme in another.

While cultural universals are by definition part of the mores of every society (hence also called "empty universals"), the customary norms specific to a given society are a defining aspect of the cultural identity of a ethnicity or a nation. Coping with the differences between two sets of cultural conventions is a question of intercultural competence. Differences in the mores of various nations are at the root of ethnic stereotype, or in the case of reflection upon one's own mores, auto stereotypes.