Val-d'Or
This article is about the city in Quebec. For the town in Malaysia, see Val d'Or, Penang. 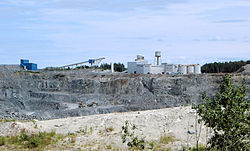 Open pit mine in Val-d'Or. Mining forms a major part of its economy.

Val-d'Or is a city in Quebec, Canada with a population of 31,123 in the Canada 2006 Census. It is located in the Abitibi-Témiscamingue region near La Vérendrye Wildlife Reserve.

Gold was discovered in the area in 1923. The name of the town is French for "Valley of Gold." While gold is still mined in the area today, base metals, such as copper (Cu), zinc (Zn), and lead (Pb) have become increasingly important resources. The ore is usually found in volcanic rocks that were deposited on the sea floor over 2.7 billion years ago. They are referred to as volcanic-hosted (or volcanogenic) massive sulphide deposits (VMS).[3]

The city is known for its vast parks, cycle tracks, and forests. Some other attractions include the City of Gold and the mining village of Bourlamaque, which were officially proclaimed historic sites in 1979. 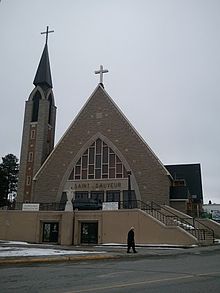 The city hosted the Quebec Games in 1987. The local hockey team, the Val-d'Or Foreurs, have played in the QMJHL since 1993, winning the league championship in 1998 and 2001 to claim a spot in the Memorial Cup. They play at Centre Air Creebec. The Foreurs' mascot is called Dynamit, named after dynamite which was extensively used by the mining industry of Val-d'Or.

Val-d'Or was once home to CFS Val-d'Or, a Canadian Forces Station.

In the municipal reorganizations of January 1, 2002, Val-d'Or was merged with the neighbouring municipalities of Dubuisson, Sullivan, Val-Senneville and Vassan.[3]

Almost all media in Val-d'Or and the nearby city of Rouyn-Noranda serves both cities. Although the cities are far enough apart that radio and television stations in the area serve the cities from separate transmitters, almost every broadcast station in either city has a rebroadcaster in the other city. The only nominal exceptions are the cities' separate NRJ stations, although at present even these stations share the majority of their broadcast schedule.

Val-d'Or Airport is served by several airlines. Air Creebec, a regional airline, has its headquarters in Val-d'Or.[5]

Val-d'Or's proximity to the Abitibi gold belt has made it a large gold producer, being part of a region that produced 45 million ounces of gold since the 1930s.[6][7]