The Four-horned Antelope (Tetracerus quadricornis), or Chousingha, is a small antelope found in open forest in India and Nepal. It is the only species currently classified in the genus Tetracerus.

Four-horned Antelope are among the smallest Asian bovids, standing just 55 to 64 centimetres (22 to 25 in) tall at the shoulder, and weighing 17 to 22 kilograms (37 to 49 lb). They have a generally slender build, with thin legs and a short tail. They have a yellow-brown or reddish coat, fading to whitish colour on the underparts and the insides of the legs. A black stripe of hair runs down the anterior surface of each leg, and there are also black patches on the muzzle and the backs of the ears. Females have four teats, located far back on the abdomen.[2]

The most distinctive feature of the animal is the presence of four horns; a feature unique among wild mammals. Only the males grow horns, usually with two between the ears and a second pair further forward on the forehead. The first pair of horns appear at just a few months of age, and the second pair generally grow after 10 to 14 months. The horns are never shed, although they may be damaged during fights. Not all adult males have horns, in some individuals, especially those belonging to the subspecies T. q. subquadricornis, the forward pair of horns are absent or represented only by small hairless bumps. The hind pair of horns reaches 7 to 10 centimetres (2.8 to 3.9 in) in length, while the forward pair are usually smaller, at just 2 to 5 centimetres (0.79 to 2.0 in).[2] 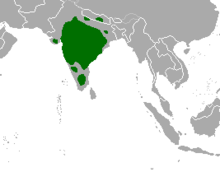 Range map of the four-horned Antelope

Most wild four-horned antelopes are found in India, with small isolated populations in Nepal. Their range extends south of the Gangetic plains down to the state of Tamilnadu, and east as far as Orissa. They also occur in the Gir Forest National Park of western India.[1][2]

Four-horned antelopes live in a variety of habitats across their range, but prefer open [3][4] dry deciduous forests in hilly terrain. They tend to remain in areas with significant vegetation cover from tall grasses or heavy undergrowth, and close to a supply of water. They generally stay away from human-inhabited areas.[2] Predators of four-horned antelopes include tigers,[5] leopards, and dholes.[6]

There are currently three recognised subspecies of four-horned antelope[7]:

Four-horned antelopes are generally solitary animals, although they are occasionally found in groups of up to four individuals. They are sedentary, rather than nomadic, and may defend exclusive territories. Males tend to become very aggressive towards other males during mating season. Adults make alarm calls that sound like a husky 'phronk', and other, quieter calls to communicate with young or other adults. They also communicate through scent marking, leaving piles of droppings in their territory, and marking vegetation using large scent glands in front of the eyes.[2]

They are herbivorous, feeding on soft leaves, fruits, and flowers. Although the precise details of their diet in the wild are unknown, they have been observed to prefer plants such as Indian plum, Indian gooseberry, Bauhinia, and Acacia in artificial trials.[2] 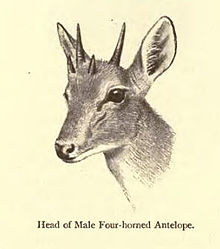 The breeding season lasts from May to July, and males and females generally remain apart for the remainder of the year. Courtship behaviour consists of the male and female kneeling and pushing at each other with inter-twined necks, followed by ritual strutting by the male. Gestation lasts about eight months, and results in the birth of one or two young. At birth, the young are 42 to 46 centimetres (17 to 18 in) long, and weigh 0.74 to 1.1 kilograms (1.6 to 2.4 lb). Young remain with the mother for about a year, and reach sexual maturity at around 2 years.[2]

The four-horned antelope is currently regarded as the only species in the genus Tetracerus. Both genetic and morphological studies, however, confirm it as one of only two living members of the tribe Boselaphini, with its closest living relative being the nilgai. This group originated at least 8.9 million years ago, in much the same area that the four-horned antelope lives today, and may represent the most "primitive" of all living bovids, having changed the least since the origins of the family.[8]

Living in a densely populated part of the world, the four-horned antelope is threatened by loss of its natural habitat to agricultural land. In addition, the unusual four-horned skull has been a popular target for trophy hunters. It has been estimated that only around 10,000 four-horned antelopes remain alive in the wild, although many of these are in protected animal conservation areas. The species is protected under the Indian Wildlife Protection Act and the Nepalese population is listed in Appendix III of CITES. The four-horned antelope is considered vulnerable by the IUCN, primarily due to increasing habitat loss.[1]