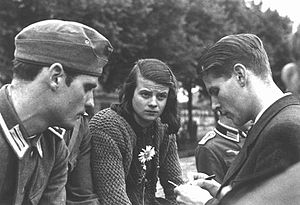 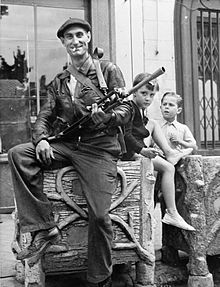 Watched by two small boys, a member of the FFI (French Forces of the Interior) poses with his Bren gun at Chateaudun, 1944

A resistance movement is a group or collection of individual groups, dedicated to opposing an invader in an occupied country or the government of a sovereign state. It may seek to achieve its objects through either the use of nonviolent resistance (sometimes called civil resistance) or the use of armed force. In many cases, as for example in Norway in the Second World War, a resistance movement may employ both violent and non-violent methods, usually operating under different organizations and acting in different phases or geographical areas within a country.[1]

The term resistance is generally used to designate a movement considered legitimate (from the speaker's point of view). Organizations and individuals critical of foreign intervention and supporting forms of organized movement (particularly where citizens are affected) tend to favor the term. When such a resistance movement uses violence, those favorably disposed to it may also speak of freedom fighters.

On the lawfulness of armed resistance movements in international law, there has been a dispute between states since at least 1899, when the first major codification of the laws of war in the form of a series of international treaties took place. In the Preamble to the 1899 Hague Convention II on Land War, the Martens Clause was introduced as a compromise wording for the dispute between the Great Powers who considered francs-tireurs to be unlawful combatants subject to execution on capture and smaller states who maintained that they should be considered lawful combatants.[2][3] More recently the 1977 Protocol Additional to the Geneva Conventions of 12 August 1949, and relating to the Protection of Victims of International Armed Conflicts, referred in Article 1. Paragraph 4 to armed conflicts "... in which peoples are fighting against colonial domination and alien occupation and against racist regimes..." This phraseology contains many ambiguities that cloud the issue of who is or is not a legitimate combatant.[4] Hence depending on the perspective of a state's government, a resistance movement may or may not be labelled a terrorist group based on whether the members of a resistance movement are considered lawful or unlawful combatants and their right to resist occupation is recognized.[5] Ultimately, the distinction is a political judgment.

The modern usage of the term "Resistance" originates from the self-designation of many movements during World War II, especially the French Resistance. The term is still strongly linked to the context of the events of 1939–45, and particularly to opposition movements in Axis-occupied countries. Using the term "resistance" to designate a movement meeting the definition prior to WWII might be considered by some to be an anachronism. However, such movements existed prior to WWII (albeit often called by different names), and there have been many subsequent to it – for example in struggles against colonialism and foreign military occupations. "Resistance" has become a generic term that has been used to designate underground resistance movements in any country. 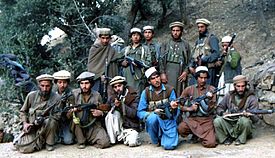 Freedom fighter is another term for those engaged in a struggle to achieve political freedom for themselves or obtain freedom for others.[6] Though the literal meaning of the words could include anyone who fights for the cause of freedom, in common use it may be restricted to those who are actively involved in an armed rebellion, rather than those who campaign for freedom by peaceful means (though they may use the title in its literal sense).

Generally speaking, freedom fighters are seen as people who are using physical force in order to cause a change in the political and or social order. Notable examples include the South African Umkhonto we Sizwe and the Irish Republican Army (IRA), both of which were considered freedom fighters by supporters. However, a person who is campaigning for freedom through peaceful means may still be classed as a freedom fighter, though in common usage they are called political activists, as in the case of the Black Consciousness Movement.

People who are described as "freedom fighters" are often also called assassins, rebels, insurgents, or terrorists. This leads to the aphorism "one man's terrorist is another man's freedom fighter".[7] The degree to which this occurs depends on a variety of factors specific to the struggle in which a given freedom fighter group in engaged. During the Cold War, under Ronald Reagan's Reagan Doctrine, the term freedom fighter was used by the United States and other Western Bloc countries to describe rebels in countries controlled by communist states or otherwise under the influence of the Soviet Union, including rebels in Hungary, the anti-communist Contras in Nicaragua, UNITA in Angola and the multi-factional mujahideen in Afghanistan.[citation needed] In the media, an effort has been made by the BBC to avoid the phrases "terrorist" or "freedom fighter," except in attributed quotes, in favor of neutral terms such as "militant", "guerrilla", "assassin", "insurgent", "paramilitary" or "militia".[8]

A freedom fighter is different from a mercenary, as they gain no direct material benefit from being involved in a conflict.

Partisans often use captured weapons taken from their enemies, or weapons that have been stolen or smuggled in. During the Cold War, partisans often received arms from either the Free World countries or the Communist bloc. Free World backed forces would receive weapons such as the American M-16 assault rifle and the FIM-92 Stinger missile launcher. Communist backed forces would receive the Soviet AK-47 assault rifle (and its variants) and RPG-7s. They also may use improvised weapons such as Molotov cocktails[citation needed] or IEDs.

The following examples are of groups that have been considered or would indentify themselves as resistance groups, the Governments they oppose would more likely define them as terrorists or criminals. These are mostly, but not exclusively, of armed resistance movements. For movements and phases of activity involving non-violent methods, see civil resistance and nonviolent resistance.

the opposite of resistance

operatives loyal to a foreign government