Arraial do Tijuco (as Diamantina was first called) was built during the colonial era in the early 18th century. As its name suggests, Diamantina was a center of diamond mining in the 18th and 19th centuries. A well-preserved example of Brazilian Baroque architecture, Diamantina is a UNESCO World Heritage Site.

Other historical cities in Minas Gerais are Ouro Preto and Mariana.

Diamantina is a statistical micro-region that includes the following municipalities: Diamantina, Datas, Felício dos Santos, Gouveia, Presidente Kubitschek, São Gonçalo do Rio Preto, Senador Modestino Gonçalves, and Couto de Magalhães de Minas. The area of this region is 7,348 km² and in 2006 the population was 80,063 inhabitants. The population density (2000) was 11.2 inhab/km². 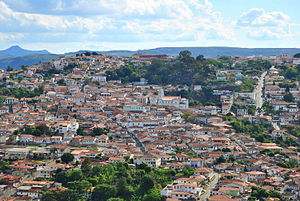 Diamantina is located 292 kilometers almost directly north of the state capital, Belo Horizonte in a mountainous area. The elevation of the municipal seat is 1,114 meters. The Jequitinhonha River, one of Brazil's most important rivers, flows to the east of the municipal seat. Diamantina is linked to the state capital by federal highway BR-259, by way of Curvelo. Diamantina Airport has regular flights to Belo Horizonte. Neighboring municipalities are: Olhos D'Água and Bocaiúva (N); Carbonita, Senador Modestino Gonçalves, São Gonçalo do Rio Preto, and Couto de Magalhaes de Minas (E); Santo Antônio do Itambé, Datas, Serro and Monjolos (S); Augusto de Lima, Buenópolis, and Engenheiro Navarro (W).

The main economic activities are tourism, services, small industry and agriculture. The GDP in 2005 was R$ 184 million, with 140 million coming from services, 23 million from industry, and 8 million from agriculture. In 2006 there were 1,248 rural producers on 73,000 hectares of land. Only 24 of the establishments had tractors. There were 14,000 head of cattle.[1]

The social indicators rank Diamantina in the top tier of municipalities in the state.

Mining for diamonds near Diamantina. River has been diverted by means of the flume shown in the middle ground, and the dried bed is searched for diamonds