The Northern Limestone Alps (German: Nördliche Kalkalpen) are the ranges of the Eastern Alps north of the Central Eastern Alps located in Austria and the adjacent Bavarian lands of southeastern Germany. The distinction from the latter group, where the higher peaks are located, is based on differences in geological composition. If viewed on a west-east axis, the Northern Limestone Alps extend from the Rhine valley and the Bregenzerwald in Vorarlberg, Austria in the west extending along the border between the German federal-state of Bavaria and Austrian Tyrol, through Salzburg, Upper Austria, Styria and Lower Austria and finally ending at the Wienerwald at the city-limits of Vienna in the east.

Ranges of the Northern Limestone Alps according to the Alpine Club classification (from east to west): 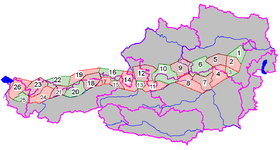