Not to be confused with Old French.

Old Frankish is an extinct West Germanic language, once spoken by the Franks. It is the parent language of the Franconian languages, of which Dutch and Afrikaans are the most known descendants. Frankish was spoken in areas covering modern Low Countries and adjacent parts of France and Germany between the 4th and 8th century AD.

The Franks descended from Germanic tribes that settled parts of the Netherlands and western Germany during the early Iron Age. From the 4th century they are attested as moving from the Roman Empire into what is now the southern Netherlands and northern Belgium. In the 5th and 6th century they expanded their realm and conquered Roman Gaul completely as well as client states such as Bavaria and Thuringia. During that period, it had a major influence on the lexicon, pronounciation and grammar of the Romance language spoken in former Roman Gaul.

Between the 5th and 8th century, Old Frankish evolved into Old Dutch (Old Low Franconian), a language that remained spoken in the area that was originally held by Franks of the 4th century (e.g., what is now the southern Netherlands and northern Belgium), while in Picardy and Île-de-France it was eclipsed by Old French as the dominant language.

Knowledge of Old Frankish is almost entirely reconstructed from Old Dutch and from etyma and loanwords from Old French. However, a notable exception is the Bergakker inscription found in 1996, which may be a direct attestation of Old Frankish.

The language from which Old Dutch arose is not known with certainty, but it is thought to be Old Frankish, specifically Old West Low Franconian, the language spoken by the Salian Franks. Even though the Franks are traditionally categorized as Weser-Rhine Germanic, Dutch has a number of Ingvaeonic characteristics and is classified by modern linguists as an Ingvaeonic language. Dutch also has a number of Old Saxon characteristics. There was a close relationship between Old Frankish, Old Saxon, Old English and Old Frisian. Because Old Frankish texts are almost non-existent and Old Dutch texts scarce and fragmentary, it is difficult to determine when the transition from Old Frankish to Old Dutch occurred, but it is thought to have happened by the end of the ninth century A.D. and perhaps occurred before then. Old Dutch made the transition to Middle Dutch around 1150.[1]

Influence of Old Frankish on French and other languages 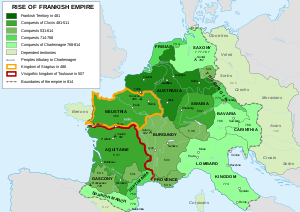 Most French words of Germanic origin came from Frankish (most of the others are English loanwords[2]), often replacing the Latin word which would have been used. It is estimated that French took between 700 and 1000 stem words from Old Frankish.[3] Many of these words were concerned with agriculture (e.g., French: jardin "garden"), war (e.g., French: guerre "war") or social organization (e.g., French: baron "baron"). Old Frankish has introduced the modern French word for the nation, France (Francia), meaning "land of the Franks". The influence of Frankish on French is comparable but greater than the respective influence of Lombardic and Visigothic (both Germanic languages) on Italian and the Romance languages of Iberia (Spanish, Portuguese and Catalan). Not all of these loanwords have been retained in modern French. French has also passed on words of Frankish origin to other Romance languages.

Frankish also had an influence on late Latin itself. Latin words with Frankish roots include sacire, meaning "seize" (from Frankish sekjan, related to English "seek"). Frankish speech habits are also responsible for the substitution of Latin cum ("with") with aboc (a Frankish corruption of apud hoc "near this") in Old French (Modern French avec), and for the use of Old French homme as a pronoun (Modern French on). English also has many words with Frankish roots, usually through Old French e.g. random (via Old French randon, from rant "a running"), standard (via Old French estandart, from *standhard "stand firm), scabbard (via Anglo-French *escauberc, from *skar-berg), grape, stale, march (via Old French marche, from *marka) among others. It has also left many etyma in the different Northern Langues d'oïls such as Picard, Champenois, Bas Lorrain and Walloon, more than in Common French, and not always the same ones.[4]

See below a non-exhaustive list of French words of Frankish origin. An asterisk prefixing a term indicates a reconstructed form of the Frankish word. Most Frankish words with the phoneme w, changed it to gu when entering Old French and other Romance languages; however, the northern langue d'oïl dialects such as Picard, Northern Norman, Walloon, Burgundian, Champenois and Bas-Lorrain retained the [w] or turned it into [v]. Perhaps the best known example is the Frankish *werra ("war"), which entered modern French as guerre and guerra in Italian, Occitan, Catalan, Spanish and Portuguese. Other examples include "gant" ("gauntlet", from *want) and "garder" ("to guard", from *wardōn). Frankish words starting with the phoneme s changed to es when entering Old French (e.g., Frankish skirm and Old French escrime).