Invader Zim is an American animated television series created by Jhonen Vasquez. It was produced by and subsequently aired on Nickelodeon. The series revolves around an extraterrestrial named Zim from the planet Irk, and his ongoing mission to conquer and destroy Earth. His various attempts to subjugate and destroy the human race are invariably undermined by some combination of his own ineptitude, his malfunctioning robot servant GIR, and his arch-nemesis Dib, one of very few humans attentive enough to be aware of Zim's identity.

Invader Zim was first broadcast on March 30, 2001. The show was targeted at children in their early teens, and met with critical acclaim. However, after the first season, the show's ratings began to suffer. Before the second season was completed, Nickelodeon canceled the series, leaving at least sixteen episodes and a planned television movie series finale unfinished. Because of its continued fan base and above average DVD sales since cancellation, Invader Zim has gained a cult following.[1]

The series consists of a pilot episode, forty-six canon episodes, and at least seventeen episodes that were in production at the time of the series' cancellation. As of August 19, 2006, all forty-six canon episodes have aired on television and been released on DVD. Nineteen of the episodes are split into two individual stories, each lasting about twelve minutes. There are eight double-length episodes. Almost every episode was directed by Steve Ressel; the only exception is the pilot episode, which was directed by Jordan Reichek.

Invader Zim revolves around the life of its lead character, Zim, his malfunctioning SIR Unit GIR and the humans and aliens who become involved in his schemes. Zim is a member of the imperialistic Irken race, an extraterrestrial species whose social hierarchy is based on height. The Irken leaders, known as The Almighty Tallest, serve together because they are exactly the same height. As recounted during the series premiere, "The Nightmare Begins", Zim, who is both very short and very naïve, was banished to the planet Foodcourtia for overzealously attacking his own planet and allies[2] during Operation Impending Doom I.[3]

Upon hearing of Operation Impending Doom II, Zim "quits" his exile in Foodcourtia and arrives at the Great Assigning. Here, elite Irken soldiers are chosen to become Invaders: special soldiers whose mission is to blend in with the indigenous life forms of their assigned planet, collect intelligence and prepare the planet for conquest by the Irken Armada. Zim pleads with the Tallest to assign him a planet and, in a desperate act to get Zim as far away as possible, they assign him to a presumed planet on the outskirts of their known universe that has never been explored. This "mystery planet" is Earth, and Zim's erratic attempts at world domination and/or the eradication of the human race begin when he lands on Earth for the first time.

The main cast is supported by recurring characters such as Dib's teacher, Ms. Bitters, and Dib's father, Professor Membrane. Later in the series, characters such as Sizz-Lorr and Tak were introduced as extra antagonists for Zim. Lard Nar and his resistance group, The Resisty, were later added as enemies of the Irken Empire. 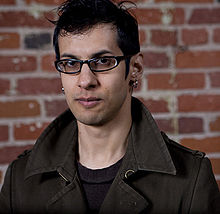 Invader Zim was created by comic book writer Jhonen Vasquez. Vasquez indicated that very little of his writing style was changed, other than restricting language and certain visuals that may not be suitable for children.[4] The biggest difference that he cites is the change from working alone to working with thousands of people at Nickelodeon, calling it an "absolute misery".[4]

Apart from a few double-length episodes (including the debut), each episode is a self-contained storyline. Sometimes the occurrences in previous episodes are mentioned but there is no continuing storyline other than the main invasion plot. According to the DVD commentaries, Invader Zim takes place in an alternate universe of its own, with a present-day Earth more technologically advanced than the real Earth. The most common setting of the show is where Zim spends most of his time "infiltrating" the human race at a school (spelled "Skool" in the show), or in his home planning his next "big" takeover. However, towards the end of the show, a larger universe of characters and organizations were beginning to build continuity: Dib's capture and repair of a downed spaceship and use of it to learn more about Zim's race; a resistance to the Irken Empire (The Resisty); an Irken seeking revenge against Zim (Tak); and various other devices which were becoming more and more a part of the show's central mythology.

The two seasons of Invader Zim were produced before Nickelodeon cancelled the show citing low ratings, over-budget production and lack of interest in continuation of the series.[5] In season two, the animation style became slightly more stylized and pronounced in motion than season one.[6] The majority of the completed season two episodes were never aired on Nickelodeon in the North American territories, although they were all eventually aired on Nicktoons Network in mid-2006.

On March 2010, episodes of Invader Zim were aired on Nicktoons. The reruns were the second highest-rated show on the network, and according to Vasquez, were part of a plan by the network to see if a revival of Invader Zim was feasible. Vasquez also asserts that, despite widespread rumor, he would have returned to the show again had Nickelodeon not deemed the revival "too expensive". [9]

Vasquez asked his friend, Mark Tortorici, to produce ideas for the theme music for Invader Zim. The two settled on a direction for the music and Tortorici and produced a final version of the theme. Vasquez's team selected Michael Tavera to compose music for the pilot episode. Vasquez said that he asked for several of the tracks that Tavera produced to be discarded and that ultimately the team had less than half of the number of tracks that they planned to submit. According to Vasquez, he and Tavera were not creatively "a great fit" for one another. Vasquez described the pilot music as having a "more 'children's television' sound", with a "much more traditional and not as surprising" theme as he wanted, but added that the music "worked for the pilot". Tortorici's theme song and Tavera's cover version did not appear in the pilot as there was no credit sequence. Vasquez said that members of the Invader Zim crew laughed at Tavera's version of the theme because it was "cheesy", adding that the reaction was not mean-spirited and that Tavera had received little information about the series before submitting the music. Tavera did not become a part of the regular Invader Zim crew, while Kevin Manthei created the series' music.[10]

Invader Zim was critically accepted, winning two awards and nominations for the first episode.[11] The DVD release has also renewed interest and re-evaluation of the show, receiving high scores and sales.[clarification needed][12][13][14][15]

During its initial broadcast, Invader Zim was the recipient of three awards and seven nominations.[16]

In 2001, Kyle Menke won an Emmy for Outstanding Individual Achievement in Animation for "The Nightmare Begins" for his storyboarding,[17] as did Steve Ressel, who won an Annie for Outstanding Individual Achievement for Storyboarding in an Animated Television Production for "The Nightmare Begins".[18] That same year, Steve Ressel, Jhonen Vasquez, and Mary Harrington won the World Animation Celebration award for Best Title Sequence.[19]

In 2002, the sound crew was nominated for the Golden Reel Award for Best Sound Editing in Television - Animation for "The Nightmare Begins". In 2003, the show was nominated post-cancellation for an Annie for Outstanding Achievement in an Animated Television Production.[20]

Invader Zim did not escape criticism for its mature tone. When Invader Zim was launched along with The Fairly OddParents, Christian Parenting Today criticised both programs, calling them "non-Christian", "immoral", and "insulting towards Christian values and beliefs" (due to Invader Zim's dark nature, and Fairly OddParents use of magic, similar to the religious debates over the Harry Potter series).[21] More negative criticism came when Invader Zim was cited in the murder trial of Scott Dyleski. The prosecution asserted that the defendant had a fascination with images of body parts. They drew attention to comments he had made after watching the Invader Zim episode "Dark Harvest", in which Zim collects human organs in an attempt to appear more human. Witnesses for the defense said that the comments were made in jest.[22]

In May 2004, Media Blasters released the first volume of an official Invader Zim DVD collection in cooperation with Nickelodeon. By late 2004, two subsequent volumes completed the series release. A boxed set in the shape of Zim's house has also been released, which includes an extras disc with an alternate cut of "The Most Horrible X-mas Ever", complete voice overs for seven of the unfinished episodes, interviews with Kevin Manthei on the sound design and music of Invader Zim, and a soundtrack of Kevin Manthei's main compositions for the show. Originally this set included a duty-mode "GIR" figurine in a roof compartment in the box set, but Media Blasters silently stopped including it with the termination of Palisade, the toy company that had been producing Invader Zim figurines. The three DVD volumes were re-released in late 2006 as a low-priced series box set without Zim's house as a case. On April 2 of 2010, Invader Zim was re-released on DVD as two sets.[23] A new DVD was released on February 22, 2011 called "Operation Doom". This set contains the highest rated episodes to air on Nicktoons Network throughout 2010.[24]

A set of Invader Zim toys produced by Palisade Toys

Two series of Invader Zim figures were produced, including Zim, GIR, Dib, Ms. Bitters, and Almighty Tallest Purple in the first series and Human Disguise Zim, Doggie Disguise GIR, Gaz, Almighty Tallest Red, and the Robo-Parents in the second. A third series was planned with Santa Zim, Elf GIR, Professor Membrane, Tak, and Nightmare Bitters, but the manufacturer, Palisades Toys, ceased operations in early 2006.[25] A multitude of other toys were produced before the termination of Palisade, such as a miniature replica of the Voot Cruiser and a 12 inch "Mega GIR" figurine with a removable dog disguise. Many other licensed products exist such as iron on transfers, stickers, and keychains, which are commonly sold at retailers like Hot Topic and Newbury Comics.

An interactve Flash game has been posted on Nickelodeon's official Invader Zim site since the series' original broadcast, based on the episode "NanoZim", in addition to other shockwave games. There were two video games created with Zim as an included character: Nicktoons: Freeze Frame Frenzy and Nickelodeon Party Blast. Zim's Voot Cruiser and house were seen briefly in Nicktoons: Battle for Volcano Island. GIR was a playable character in Nicktoons: Attack of the Toybots while Zim was only playable in the DS version. Both Zim and Dib are playable in Nicktoons: Globs of Doom, with GIR as a boss battle and rescuie after the battle. The game Nicktoons: Android Invasion, on the educational Didj platform, is set entirely inside Zim's base. Zim is the main boss in the game, with several other characters making appearances. Zim and Gaz are playable characters in Nicktoons MLB, GIR appears in the game as well as one of the announcers, and there is a ballpark for the show called "Irken Field". Other characters appear in the game as cameos when the game is loading and on the character cards. The series has yet to have a stand-alone video game set.